“Due to the University’s Zero Tolerance policy on s*xual exploitation and abuse, the administration has suspended the accused employee indefinitely until the investigation is complete,” AME University said in a statement.
An entrance examiner at the African Methodist Episcopal University in Monrovia has allegedly r***d an 18-year-old woman seeking admission to the University.

According to the victim, she met with Tony Fassai in his office as a result of her quest to challenge her entrance result. There, Tony r***d her -- victim alleged.

The victim claimed that Tony grabbed her from the back when she tried leaving his office after complaining about the test result and, after a few tussles, he r***d her.
“I told him since this is the case, I’ll get my father to take it up with the University Administration. As soon as I turned to leave the office, he held me from the back, we tussled and his strength overpowered me and r***d me,” the victim alleged in a complaint, as quoted by Women’s TV, an online media platform.

Tony meanwhile has admitted to the police that a s*xual encounter took place but denied the r**e allegation. Police Spokesman, Moses Carter told the Daily Observer that Tony, while being investigated, admitted to having consensual s*x with his alleged victim instead of r**e.

“The police are investigating the case and the medical report has confirmed pe*******on, but for now, we cannot say if the claim of r**e is true or not, as the matter is still being investigated to establish all the facts. The suspect confirmed that they had consensual s*x,” Carter added. “The police will investigate the matter and will do so in accordance with the law. The suspect is in police custody and has contacted his lawyer, who is now involved in the case.”

The victim, whose identity is being protected, claimed that she entered Tony's office alone with another prospective undergraduate.

No condition is permanent Your life will change for better

Be visionary person in every actspect of your life. Do u agreed to be?

I will try my possible best to find her, but friends of mine u must join me.will u?

Be the first to know and let us send you an email when Exclusively p c k Intellectual Forum posts news and promotions. Your email address will not be used for any other purpose, and you can unsubscribe at any time. 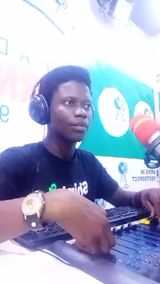 Other Radio Stations in Gbarnga