Special Message from Mr. Cummings on the "We tired rally"

Special Message from Mr. Cummings on the "We tired rally"

Yeke Kolubah securities battle to get on the podium where he was seated at the "We tired rally" but to no avail. 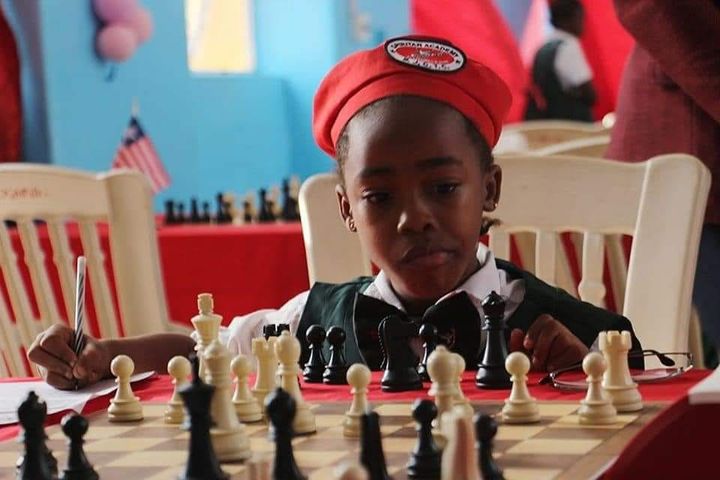 8 year -old Abella M. Sormalah from Spiritan Academy in Liberia 🇱🇷 is partaking in Liberia’s Chess ♟ Federation National Championship and has won 🏆 two games from four Matches at the ongoing Tournament 🏟 - it’s been reported that she is the youngest National chess ♟ player in Africa history !

Former Vice President and Standard Bearer of the Unity Party His Excellency Joseph Nyuma Boakai has told the Africa Youth Summit convening on Google Meet that he envisages an Africa where we depend less on export raw materials and more on export of finished goods.
Dr. Boakai said he looks forward to an Africa where there exist a strong and enterprising middle class based on economic strength and income and an Africa wherewhere our "rich land" is used to feed the continent rather than depending on importation of basic commodities.
The Former Vice President was addressing the Africa Youth Summit 2022 held under the theme "Raising Leaders of Renewed Mindset to create a New Africa " virtually held on Google Meet Wednesday.
Speaking to participants all over Africa from his Offices in the Rehabilitation Community in the Paynesville District, Ambassador Boakai told participants on the platform and African Youths that what he considers the new Africa is an Africa where gender parity in leadership and representation is achieved to allow the participation of all.
Addressing the topic under consideration "Raising Leaders of Renewed Mindset to create a new Africa" the renowned Statesman pointed out that he looks forward to an Africa where democracy works with regular peaceful transition of power from one government to another and an Africa where we invest the most in educational infrastructure and intentionally invest in human capital especially in the young people.
He noted that he could go on and on to describe what the" new Africa" should look like, however he averred that his focus today is how we can get there by using one of our most valuable resources -the youth.
The summit held under the aegis of Global Peace and Security Organization featured Ambassador Joseph Nyuma Boakai Former Vice President of Liberia, Mr Robert Kyagulanyi Ssentamu otherwise known as Bobi Wine from Uganda, Ambassador Dr.Kelvin Nyamache, Chairman,African Union Youth Assembly, Rt.Hon Bamikole Oladele Babs,Speaker Africa Youth Parliament amongst other key African personalities, a release from the Office of the Standard Bearer of the Unity Party said.

(Tuesday, December 13, 2022, Virginia, Montserrado County) The President of the Liberia Baptist Missionary & Educational Convention, the Chairman and Board of Trustees, the Administration of Ricks Institute regret to announce the sudden death of Ms. Willvette Angel Nagbe, a student of Ricks Institute.

Student Nagbe was born on March 27,2009. She was a 6th grade Day Student, and not a Boarding Student. Student Willvette Angel Nagbe was thirteen years and eight months. She enrolled at Ricks Institute in the fourth (4th) Grade during academic year, 2019.

The President of the Baptist Convention, the Board of Trustees and the Administration of Ricks Institute deeply regret her death and extend profound condolences to the bereaved family.

It is important to have the public informed that our internal investigation revealed that Student Nagbe was sick at home prior to going on the field trip in Buchanan, Grand Bassa County. This information was unknown to the School’s Administration prior to our departure.

Given the severity of her illness upon our return to Monrovia, the School’s In-House Nurse from Ricks’ Clinic immediately took her to Redemption Hospital, where she was later pronounced dead.

Once again, we profoundly regret the passing of our student.

Following hours after Activist Martin K.N. Kollie unearthed gross discrepancies in the academic credentials of the President of the Liberian Bank for Development and Investment Deo Z Delaney, the Board of the Directors has admitted to a fraud process in the recruitment exercises.

The Bank, in a statement issued December 6, 2022, acknowledged receipt of a resignation letter from Delaney as President of the bank.

According to the Statement signed by the Chairman of the Board, Min. Samuel D Tweah Jr, there were inaccuracies with the firm hired to do the recruitment of its president which brought on board Mr. Delaney.

However, the Bank has announced Mark Arkwenah Nyeamene Jr as the new acting President of Bank. Mark has previously served as the General Manager and Deputy CEO of the LBDI.

It is reported by Martin Kollie that Delaney lied about academic credentials for being a masters degrees holder from Harvard University and other higher institutions of learning abroad. Delaney credentials proved contradictory to the LBDI’s request for a President.

The LBDI has however requested all its customers and stakeholders to work with Mark, the new acting CEO until another recruitment exercise is considered. LBDI usually hires international consultative firms to vet candidates for its higher level job within the bank.

Prior to his resignation, Delaney’s appointment receiving commendations across social media and news outlets over promising young professional who had taken over the Liberian owned banking institution. No less than a year, his credentials were search and found faulty.

Buchanan- Cllr. Charlyne Brumskine has broken her silence by accepting the endorsement of hundreds of Bassa citizens, saying she's ready to ably represent Buchanan District (District 3) at the Legislature in 2023.

Supporters of Madam Brumskine backed by top Liberty Partisans matched through the principle streets of Buchanan to the Unification Pavilion where an endorsement statement was read by Mr. Jones Karyea .

She furthered “We believe that a duty is owed to the people of Grand Bassa County, Partisans of Liberty Party, and the legacy of the Late Cllr. Charles Walker Brumskine to serve the interest of the residents of District 3, Grand Bassa County.

She further said her political, legal, and economic contributions to the Liberty party backed by her numerous contributions to Liberia are big enough and cannot easily be estimated in her quest to serve her people. The incident took place during the evening hours on Sunday November 27 while heading to Montserrado.

Medica Liberia over the weekend launched a project title : Strengthening 'Communities and institutions to promote the psychosocial health of women and girls affected by violence and increase their protection from gender-based violence in Montserrado and Margibi Counties, in the context of the Covid-19 crisis'

The organization operates in the Southeast of Liberia and Montserrado Counties.

Today the organization launched the third phase of their BMZ(that is the German Federal Ministry for Economic Cooperation and Development) funded project at the Corina Hotel in Sinkor.

Office of the National Secretary General

December 7, 2022 Monrovia, Liberia: The Unity Party convened an inter-party consultative meeting today with opposition political parties at its National Headquarters to deliberate on matters related to national elections, census and other national issues of mutual interest.

Officials of the Unity Party, in their opening statements, explained that the meeting was part of efforts to create a platform for opposition political parties to consult frequently and collaborate on issues around the 2023 Presidential and Legislative elections.

Representatives of other political parties present acknowledged the initiative and welcomed the establishment of a technical working group with the objective to collaborate on issues of shared interest and work as a team in the lead up to the 2023 elections.

Today’s meeting was particularly focused on the need to form common position on the National Elections Commission’s procurement of biometric materials, elections timetable and the ongoing seemingly disorganized census process.

Political parties successfully deliberated and carved out important concerns in relations to the procurement of biometric materials, election timetable and the apparent internal skirmish at the NEC, all of which will be raised in the scheduled IPCC meeting tomorrow, Thursday, December 8, 2022.

On the important subject of census, parties agreed to used appropriate platforms that involve the participation of partners to channel relevant concerns.

At the close of the meeting, parties agreed to frequently meet as part of a confidence building process and collaborate where necessary on technical subject matters affecting elections preparations.

Dr. Dougbeh Chris Nyan on State of the Nation

An eight bedroom house gutted fire in the Diamond Creek community in ELWA and left 6 persons dead.
Cause of the fire is yet to be established.

Report reaching Explore TV reveals that Finance Minister Samuel Tweah and his entourage were involved in a tragic motor accident along the B**g to Lofa County highway.

Multiple sources are reporting that the incident occurred on today, Sunday, November 27, 2022, while the Minister and others were returning from Lofa county.

Minister Tweah and his entourage were in Lofa County during the weekend for the 2022 graduation convocation of the Lofa County Community College, where the minister served as keynote speaker of the occasion.

This latest happening took place while on their way back to Monrovia.

Continuation of Mr. Alexander B Cummings town hall meeting with stakeholders at the Paynesville town hall.

Continuation of the induction ceremony of officials of Rockhill Community

Marathon Partners and Sponsors and Organizers meeting at Royal Hotel.

Be the first to know and let us send you an email when Explore Liberia Online TV posts news and promotions. Your email address will not be used for any other purpose, and you can unsubscribe at any time.

Other Media/News Companies in Paynesville

Other Media/News Companies in Paynesville (show all)