The show is hosted by student members of W-ZIP and can be heard throughout Northeast Ohio every Sunday from noon to 1 p.m. on WZIP-FM 88.1. Stream live on the web at wzip.fm and follow the SPT Show on Twitter at twitter.com/SportsPowerTalk

From The 3 podcast: Cavs Own Trade Deadline

Our take on Trade Deadline Day for the Cavs: The guys break down the Browns week 6 loss to the Texans, how the defense continues to improve, and how the offense needs to do their share in giving that defense some rest.

The Barely Awake Morning Show invades Sports Power Talk today! We got Nick Jordan and Cami Justice with Rocco Nuosci in just over a half hour, don't miss it!

Toledo with the victory over Buffalo 72-65. Toledo will play Northern Illinois tomorrow for the MAC Women's Championship!!!

Buffalo for three! Down only by 5 now with 5 minutes left!

After 3, Toledo has the Lead 51-39. Toledo ended the quarter on a run and are 10 minutes away from going to the Championship

20 more minutes of game left. Toledo looking to hold on and play tomorrow for the MAC women's championship.

Toledo 23 Buffalo 21. 4 minutes left in the half. Been back and forth since top off.

17-15 Toledo over Buffalo after one. Been back and forth. In for a good one here.

A good one here early. As halfway through quarter one. Buffalo holds a one point lead over Toledo 9-8

We are minutes from game time as the University of Buffalo takes on Toledo. Winner plays Northern Illinois Tomorrow for the MAC women's championship.

The Northern Illinois Huskies are up 44-24 over the Western Michigan Broncos at the end of 2 quarters. The Huskies passed the ball really well and had a total of 11 assists.

Northern Illinois are up 18-10 over Western Michigan at the end of the 1st quarter, Ally Lehman leads her team with 7 points, 3 assists and 4 rebounds

Buffalo leads Kent State 16-12 with 11:02 left until halftime in game 4 of the MAC QUARTERFINALS

Clutch free throws from Ball State make it a two possession game over WMU at 61-57 with 3:04 to play

Wilder ties the game for the Broncos, 54 all here with 7:30 to play

The University Of Akron
Akron, OH

Be the first to know and let us send you an email when Sports Power Talk posts news and promotions. Your email address will not be used for any other purpose, and you can unsubscribe at any time. 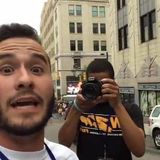 Other Broadcasting & media production in Akron

Tune into Sports Power Talk now with myself Jake Allen and Isaiah Houde !
Love your show guys
Steph Curry and Lebron James can't be stopped... To win the finals, who do you stop?
No show on the radio today??
Ben is a hater of hoyer.
I follow college football and basketball because they don't get paid and play from their heart to make it to the next level to get paid. When the first college basketball or football lockout comes because of pay will it be a good idea then?
(PLS SHARE and Support) (My Boss) Disabled CEO launches Crowd Funding Campaign :http://www.indiegogo.com/projects/disabled-man-needs-to-increase-manufacturing-of-hair-product/x/6175718
The Richardson trade was terrible. Trent wasn't given enough carries to be as effective as he can be. And I think Chud has too much faith in Weeden. Weeden has shown that he isn't the long term answer for Cleveland. Plus the browns could've gotten a lot more for a #3 pick than just one first rounder.
Bengals beat Browns... 28-17
Some political stumping!
x

Other Broadcasting & media production in Akron (show all)