The South's first television station, WSB-TV, brings you breaking news, live video, traffic, weather and your guide to everything local for Atlanta and North Georgia.

Visit us at www.wsbtv.com or www.twitter.com/wsbtv The first TV station in the south!

The news of Hovain's death was posted on his official social media accounts.

A Florida woman is suing the parent company of Velveeta's microwavable Shells & Cheese cups, claiming that she would not have bought the product had she known that it would take longer to prepare than the 3 1/2 minutes stated on the label of the box.

"Using a machine was an error in judgment and I want to rectify it immediately,” Bob Dylan said in a statement.

There was an outpouring of grief and memories from Hollywood celebrities after hearing about Irene Cara's death.

The Orion spacecraft is now in the record books.

Voters waited for hours to cast their ballots for the upcoming Senate runoff election between incumbent Raphael Warnock and his Republican challenger Herschel Walker.

The company, which is owned by Amazon, cited decisions by two sustainability organizations to take away endorsements of the U.S. lobster fishing industry, The Associated Press reported.

Police give update on shooting in midtown Atlanta

The Fresno Chaffee Zoo has announced the birth of a white rhino.

It’s unclear at this time exactly how many people were shot. Stay with Channel 2 Action News and WSBTV.com for updates.

It’s unclear exactly how many people were shot.

A locked door is the only thing that kept residents of a North Carolina home from greeting a persistent visitor. >>>https://2wsb.tv/30n6kGF

When officers arrived, they found the woman dead inside a car with a gunshot wound.

State law allows counties to devote up to 7 mills of property taxes to pay for hospital buildings or subsidize health care.

Officials believe the shooting appears to be justified and no charges are expected.

The National Dog Show has picked its best in show for 2022: a French Bulldog was crowned top dog.. See all the winners here. https://2wsb.tv/3F1l7ww

EMS arrived on the scene and pronounced the man dead.

She testified before a House subcommittee about her brother’s death to shed light on the dangers that warehouse workers face.

“When meeting individuals to buy/sell items, use public areas that are well lit and heavily populated," the department said.

What's your favorite Christmas tradition?
From holiday parades to candy cane hunts to photos with Santa to an ugly Christmas sweater bar crawl with the Grinch, check out some of the events going on around town.

Her second child was also injured.

Shanquella Robinson died while on a Mexican vacation with her friends. An arrest warrant has been issued for one of them: https://2wsb.tv/3GKo5a4

The dedication will take place Monday, Nov. 28 beginning at 1 p.m. in Packard Hall.

Festival of Trees features UGA, Wizard of Oz, 2 Chainz trees up for auction

Bidding on these trees ends later today. See the one tree that is up to nearly $1,000!

After the pandemic, the Gwinnett County Indigent Defense went from 130 lawyers down to 80.

Khorry Ramey said her father has "been there for me my whole life, even though he’s been incarcerated."

A man rammed into a Georgia grandmother's car, then hit and killed her when she checked for damage. A judge sentenced him this week: https://2wsb.tv/3V7dYAz

Police said that Ashlee Morgan was traveling at about 60 mph in her 2019 Range Rover Velar toward the Coffee Pot Turkey Trot race.

Authorities said when the carjackings took place, the minors used a gun to intimidate the owner of the cars.

Rejoice, Whataburger fans! You are just days from enjoying the first of 10 restaurants opening in Georgia.

‘I would risk my life for my sister’: 11-year-old saves little sister from fire

The boy suffered minor burns to his arm while rescuing his 2-year-old sister.

The woman and the suspect reportedly had a conversation prior to the encounter.

No explosives were found in the man's bag.

The suspects had tried to wrap something around the ATM machine, but the machine was still in place and remained plugged in when officers arrived.

The weapon was a legally-purchased 9mm handgun, police said.

Officials: Woman charged in connection with murder of 4-year-old girl in North Carolina

The suspect was reportedly dating the girl's father.

Be the first to know and let us send you an email when WSB-TV posts news and promotions. Your email address will not be used for any other purpose, and you can unsubscribe at any time.

Send a message to WSB-TV:

WATCH: A car theft suspect was arrested after returning the truck to the parking deck it was taken from while officers were still there. >>> https://2wsb.tv/3X5E9J6

At approximately 6:30 a.m., firefighters with the Henry County Fire Department, along with officers from the Stockbridge Police Department, responded to reports of a fire on Mimosa Drive. >>>https://2wsb.tv/3TuIeni

We are on the scene of a stand off situation in Butts County. Here's what we know >>>> https://2wsb.tv/3URsUC9

Two WWII-era aircraft collided and crashed to the ground in front of spectators at an airshow Saturday afternoon. >>>https://2wsb.tv/3AarTxp

Doorbell camera captures dozens of gunshots being fired into a DeKalb County house, killing a 17-year-old girl and critically injuring a man: https://2wsb.tv/3EoynLA

A Georgia college student is being accused of killing his grandfather in Florida, attacking a detective and threatening to kill them too. >>> https://2wsb.tv/3A94U5z

BREAKING: Atlanta police are investigating a shooting that left one person critically injured near an apartment building in a busy area of Buckhead: https://2wsb.tv/3EiRw1j

Take a look at this! A man is in custody after Atlanta Police said he stole a Grady ambulance from 550 Peachtree Street. >>> https://2wsb.tv/3zXNnNB

BREAKING: Crews are battling a large grass fire in Buckhead. NewsChopper 2 is flew over the area where a large amount of smoke can be seen for miles: https://2wsb.tv/3hv41Or

Gov. Brian Kemp joined us in the WSB-TV studios for his first interview since his re-election. Kemp also says he has reached out to Herschel Walker and his campaign: https://2wsb.tv/3DShQy3

"We're in a fight:" U.S. Senate candidate Herschel Walker is thanking his supporters and saying he's confident about the election's outcome: https://2wsb.tv/3hrbvlA

"I am so grateful:" Rep. Marjorie Taylor Greene addressed her voters after winning relection to the U.S. House of Representatives. LIVE election results here >>> https://2wsb.tv/3NPLTe8

We remain at the scene of breaking news where a car drove into a DeKalb County classroom. Witnesses said they heard screaming and saw children running around 10:30 a.m. today: https://2wsb.tv/3tb2IGQ 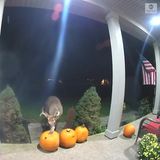 OH, DEER: This buck showed its appreciation for a Kentucky resident’s finely crafted jack-o'-lanterns by eating them. https://2wsb.tv/30n6kGF

Have you seen him? Deputies still searching for Brentson Bernard Thomas, the suspect in the officer-involved shooting on Friday. Henry County Sheriff's Office released video of Thomas' social media handle in hopes of finding him. >>> https://2wsb.tv/3WDaK8X 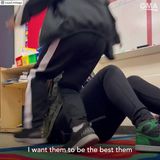 This teacher’s empowering "mirror affirmations" inspire her students and the internet alike!: https://2wsb.tv/30n6kGF

Masked man pretends to rob store at gunpoint before laughing

The Cherokee County Sheriff's Office has identified and arrested the 18-year-old who pretended to rob a vape shop, saying it was for a YouTube video: https://2wsb.tv/3FJA4nS

Sanford Stadium will host AP No. 1 vs No. 2 for the first time ever. It's also the first home game since Vince Dooley's passing. Watch our 1-on-1 with Coach Smart, on Bulldogs Game Day Saturday at 11 a.m. https://2wsb.tv/Bulldogs 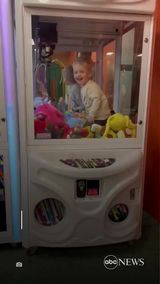 HAPPY ACCIDENT: This 2-year-old was delighted to find his way into a claw machine while playing in an indoor playground. He happily threw some toys down the chute to all his friends before safely crawling out backwards: https://2wsb.tv/30n6kGF Video via ABC News

Ga. soldier surprises daughter at school on her birthday

HEARTWARMING: A Georgia soldier came home from a six-month deployment to surprise her daughter at school on her birthday. ❤️ >>> https://2wsb.tv/3UkPrap

This is the final footage of a 13-year-old found dead along a trail in DeKalb County. Here's what police say it reveals: https://2wsb.tv/3sUzFY0

Dashcam footage captures moment passenger exits vehicle during traffic stop, drops a bag that police say had nothing illegal in it, and runs, as authorities put it, like “Forrest Gump.” >>>https://2wsb.tv/30n6kGF

The Forsyth County Sheriff’s Office is investigating after a fatal crash involving students outside of a high school Tuesday morning. The crash happened on Mullinax Road close to Denmark High School and directly across from the school sign. >>> https://2wsb.tv/3NnChaq

For more than 70 years, metro Atlanta's #1 source for breaking news, weather, and neighborhood coverage you can count on.

Other TV Channels in Atlanta

Re: Your report this morning about the shortage of "live" Christmas trees this year:

If the tree has been sawed off at the bottom of the trunk, the tree is no longer alive. It is dead. It may LOOK like it's still alive, but it's not. IT IS DEAD. Within a few days, its needles will start to turn brown and brittle and fall to the ground. A "live" Christmas tree will come with its roots wrapped up in a large canvas bag, and it can be replanted into the ground after Christmas where it will continue to live and grow for possibly many years. THAT is a "live" tree. NOT one that has been chopped down.

If you need a term to distinguish a cut tree from an artificial tree, you can say "cut tree."

Thank you for your continuing journalistic excellence.
Everyone! I know this recommendation might not be appropriate but this was the same way it got posted when i decided to give it a try "my first time investing with an online expert manager". All because of fear i decide to try it with little amount of $1100 but to my greatest surprised this man made me a profit of $12,000 within a week, now I'm continuously earning not less than $8,000 - $12,000 anytime i invested with minimum amount of $1000 within a week. Just so i also decided to post it out through recommendation just in case if anyone might be interested!! here's his WhatsApp contact: +1 762-239-1392 or Email address: [email protected]­.com
According to WSB-TV, several Mexican authorities have issued an arrest warrant for the death of Shanquella Robinson. The Diario El Independiente and NBCS Noticias, a Mexican prosecutor, say the warrant was issued for Robinson’s friend, who was identified as the direct aggressor.


According to WSB-TV, several Mexican authorities have issued an arrest warrant for the death of Shanquella Robinson. The Diario El Independiente and NBCS Noticias, a Mexican prosecutor, say the warrant was issued for Robinson’s friend, who was identified as the direct aggressor.


Get $100 when a friend signs up through your referral link and receives a payroll direct deposit of $200 or more within 45 days of opening their account. Your friend will get $100, too! member.chime.com/join/woodburcknoe💵
Sign up and direct deposit $200 or more of payroll or federal benefits, excluding tax refunds, within 60 days. I receive $50. You receive $50.
https://www.card.com/referral-invite/5110510?chn=raf-tw&raf_version=8dfad0e
💵
Do you want your customer back more often?
Text message marketing is exploding!
SenText Solutions.
Woodburck Noe
Mobile Marketing Consultant
Sales Agent ID: SENREZI
WWW.SENTEXTSOLUTIONS.COM
[email protected]
💰
Please put Kelly Clarkson back on at 10:00 a.m.
Here in Griffin, we are all excited about our guys !!!
It's all going down on Friday ! Come on everyone give our guys a shout out !!!
WSB-TV
Is Walker still allowed to be on a ballot in GA?
Congratulations Glenn Burns.
Congratulations Richard Belcher.
Happy Retirement!
There's a fire on Washington Rd. complex Brookfield apts.
PLEASE PUT KELLY CLARKSON BACK ON AT 10 AM!.PLEASE! CHANGE TAMRON HALL!
Hi brother and sisters please share this number
9844002208
https://m.facebook.com/story.php?story_fbid=10167037905590285&id=900320284&sfnsn=mo&mibextid=RUbZ1f
x

Other TV Channels in Atlanta (show all)