Disney Street will bring the up to date news of disneyworld.

July 17, 1955 Walt Disney speaks during a national telecast of the opening of Disneyland

Tiki Tuesday! Walt and hostesses wake up Jose during the opening of the Enchanted Tiki Room in 1963

Walt checking on of the Peter Pan's Flight vehicle

disneyland entrance with the matterhorn in the background

Probably the most famous picture of Walt at Disneyland. Walt is entering Fantasyland walking through Sleeping Beauty Castle - and not exiting to Central Plaza as sometime it is thought

Liberty Square Bridge It was supposed to be one of the more authentic touches found in the Liberty Square section of
WDW's Magic Kingdom. A recreation of Concord Bridge AKA the Old North Bridge.
Where -- on the morning of April 19, 1775 -- 300 to 400 colonials faced down 700 British troops.
And according to Ralph Waldo Emerson's "Concord Hymn" Unfortunately, within just a few years of
Disney World's grand opening, the Magic Kingdom's version of Concord Bridge had to be retooled.
Mostly because the floats that had been built for "America on Parade" just couldn't handle the
curved shape of this Liberty Square structure. 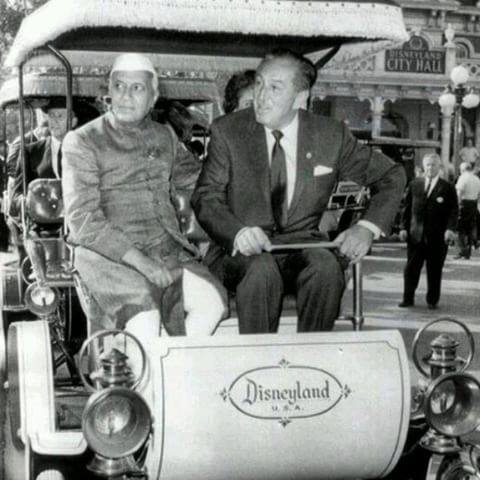 Be the first to know and let us send you an email when Disney Street1 posts news and promotions. Your email address will not be used for any other purpose, and you can unsubscribe at any time.

Club 33, a legendary private lounge at Disneyland, is coming to Walt Disney World, was confirmed Thursday. Versions of Club 33 will be installed each Walt Disney World theme park — Magic Kingdom, Epcot, Disney’s Hollywood Studios and Disney’s Animal Kingdom — There are no further details from Disney yet about the establishments, including their exact locations in the 4 theme parks or the cost to join the “limited membership” club.The original Club 33 opened at Disneyland park in 1967. The company says that Walt Disney drew inspiration from the executive lounges at the 1964 New York World’s Fair. There were corporate and individual memberships. Various sources list membership fees for Disneyland’s Club 33 (in calfornia) in the thousands of dollars per year. Last year, the Los Angeles Times reported that the club's annual dues were “said to be $10,000 a year,” which entitles members to park admission, exclusive benefits and access to the only alcohol regularly served at Disneyland. Travel + Leisure magazine says that’s on top of a $25,000 entrance fee to get in to the club if you can.

Celebration Exotic Car Festival.,,,,The 2017 Celebration Exotic Car Festival runs from April 6-9.,,Exotic cars, Hollywood vehicles and celebrities come together this week for the four-day event that features a two day trips for participants to spin their pricey four-wheeled toys around Daytona International Speedway has as its highlight for the general public a free display on the waterfront of downtown Celebration.In its 14th year, vehicular highlights on Saturday include the presence of more than 400 cars including the Ferrari, Maserati, Lamborghini, Lotus, Aston Martin, Bugatti, Spyker, Saleen, McLaren, Pantera and the DeLorean.The display runs from 9 a.m.-4 p.m. with an awards presentation at 3 p.m. That includes winners driving their cars across a red carpet to get their trophy. Event organizers said previous years have attracted 40,000 people to the free Saturday display.

Disneys Typhoon Lagoon Introduces Changes After Refurbishment After Typhoon Lagoon closed for its annual refurbishment back in December 2016, Disney's Typhoon Lagoon continued to be busy as construction crews worked hard to bring a number of enhancements to some of the water park's best attractions and amenities. In addition to installing new signs and maps, some of the queues around the water park received new cooling fans, pools and slides were repainted and tweeted up, and more. This is definitely a great year for Typhoon Lagoon lovers, as the park also opened a new attraction just a few days ago. The Surf Pool: Typhoon Lagoon's premiere attraction has been completely resurfaced and equipped with new pumps to ensure "totally tubular" waves for Guests while further enhancing the safety of both Cast and Guests big and small. New DirectOARies (Directions + Boat Oars = DirectOARies): Similar to signage found at Blizzard Beach, Typhoon Lagoon now has additional information for Guests to navigate around the park. By combining creative theming with Guest information, the park will allow Guests to efficiently get around to amenities and attractions. New in-park maps: With their fresh and vibrant look, the new in-park maps have been added to the park in an effort to further enhance the Guest experience. No paper or mobile device is needed to navigate around the park. Brand new park-entry signs: A brand new park-entry sign has been added to the Main Entrance. Wood-workings were re painted and rebuilt as well. Keelhaul Falls: In efforts to exceed Guest expectations, shades and fans have been added for your coolness in the queue line. Palms Dining: Palms Dining has been equipped with new fans to cool off all you Guests as they await or serve food orders. In addition, misters have been added to the mug refill stations. Self-serve locker rental kiosks: Typhoon Lagoon's self-serve locker rental kiosks have been upgraded with new and innovative technology. As a result, the

Miss Adventure Falls Now Open at Disney’s Typhoon Lagoon Water Park Miss Adventure Falls, is a new family-friendly water attraction located at Disney’s Typhoon Lagoon Water Park, is now taking guests of all ages on a high-seas journey. Miss Adventure Falls brings to life the story of Captain Mary Oceaneer, a treasure-hunting heroine and world-famous oceanographer who made it her goal to sail the seven seas and collect treasures to share with the rest of the world. Disney’s Typhoon Lagoon became the home to Captain Mary’s ship after a rogue typhoon swept it and some of her artifacts to shore, where the locals then repurposed the goods and statues to create this fun, family raft adventure. In a first for a water attraction in Florida, guests are transported via a conveyor belt while seated in their rubber treasure rafts to the top of the slide, passing by Mary’s wrecked ship where her parrot and diving partner Duncan talks alongside their treasures. From there, this white-water adventure takes them through twists, turns ups and downs where they will see deep-sea artifacts that Captain Mary collected on her many treasure hunts around the world. With a ride time of two minutes, Miss Adventure Falls is the longest attraction at Typhoon Lagoon so far..