All winners who did not get their trophies, can pick them up from us today. Meet us at Friday's on City Line Avenue, between 1 and 3pm. 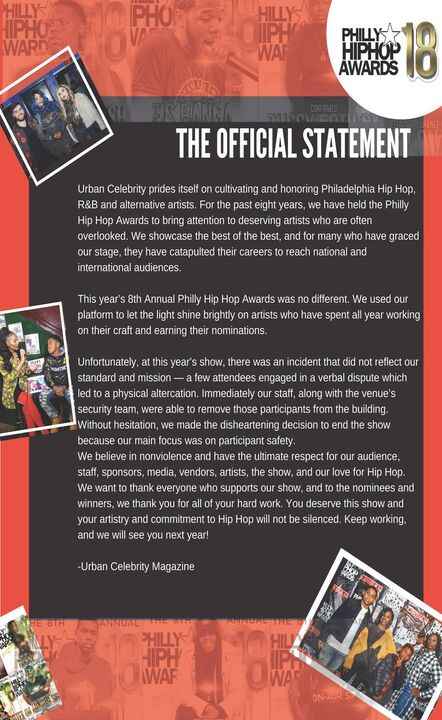 Please read the official press statement from Urban Celebrity Magazine in regards to the Philly Hip Hop Awards! We will not be silenced!

Want to model for the Philly Hip Hop Awards? Make sure you contact us!

Invite Only!!! And trust me you want to be there!!!

We are announcing performers as they get confirmed. The line up so far is crazy!!!

It's official, your DJ for the 8th Annual Philly Hip Hop Awards is none other than DJ Dior Cartel! Now that's how you do it!!!

It's that time of year so you know the hottest in the city will be recognized this year the 8th Annual Philly Hip Hop Awards!

Get your tickets and make sure you're in the building!

Tomorrow is Election Day, so do your civic duty and VOTE! See you at the polls!!! Get your VIP seats today! Call or email us for details!!!

Vendors this is your chance to have your brand/product represented at the most amazing night in Hip Hop!

Models come be a part of an amazing night of Philly Hip Hop!!!

Congrats to all the winners of the 2016 Philly Hip Hop Awards!!!

Be the first to know and let us send you an email when Urban Celebrity Magazine posts news and promotions. Your email address will not be used for any other purpose, and you can unsubscribe at any time.

Other Magazines in Bala Cynwyd

Happy birthday
I want to shout out to Jimmy and the other sponsor of Philly's Hip Hop Awards 2017 for at least trying to recognize some of Philly's most talented. It's been about 7 years since you guys started putting this event on. I believe I came out to 1 or 2 shows in the beginning, just trying to support. I was there last night as well, in the spirit of supporting. I was a little disappointed. I thought the event would have grown a bit bigger and better, your nominees having to pay to get in and stand in line with the general public. I've never seen anything like it. People were leaving early due to the drug use and w**d smoking that was present. That was a bit concerning especially with so many children present. I love to support this event but it's getting very difficult. This show should represent Philly's finest in a finer, stronger, more positive, more organized light. The show should be attracting people from all around Philly's tri-state area. But it isn't. A touch a class might help. But again thanks for the effort.
x

Other Magazines in Bala Cynwyd (show all)