BREAKING: Cyntoia Brown has been granted clemency after serving 15 years in prison for killing man who raped her after he bought her for sex.

: Eric Black Jr. is being charged with capital murder for the shooting death of Jazmine Barnes. Information still developing.

House Speaker Nancy Pelosi speaking to reporter: “A wall is an immorality. It is not who we are as a nation.” She then goes on to talk about how Trump is using the fight for “the wall” between the United States and Mexico as a diversion away from major budget cuts he’s proposing that will negatively affect his base.
—————————————

This is America... The federal government suggests that furloughed employees trade services with their landlords and other creditors until the government shutdown is over. (Swipe to view sample letter for creditors)
—————————————————
@ Washington, District of Columbia

Garbage overflows a trash can on the National Mall across from the White House on Jan. 1.

More than 21,000 National Park Service employees, including those who are responsible for trash removal, are furloughed as the partial government shutdown enters its 12th day.

President Trump is expected to meet with Democrat and Republican congressional leaders Wednesday afternoon, their first meeting since the shutdown began.
————————————————
Via:
📸Bill Clark/CQ Roll Call via AP Images

Washington Post
・・・
The body of former president George H.W. Bush arrived at the U.S. Capitol Monday afternoon to begin several days of tributes and ceremonies befitting a nation's fallen leader. The casket was placed on the same pine board catafalque, covered in black fabric, that held the coffin of Abraham Lincoln after he was assassinated in 1865. And 180 feet above, in the “eye” of the Rotunda, was the 1851 fresco depicting the exaltation of the nation’s first president, George Washington. Among the gathered dignitaries there, was Vice President Pence, House Speaker Paul Ryan, Senate Majority Leader Mitch McConnell, members of the U.S. Supreme Court, former Secretary of State Colin Powell and various high ranking military members. #41

The day has arrived Mississippi to let your voice be heard during this important runoff election by casting your vote. Find your polling location in the link our bio.

CNN
・・・
“Touchdown confirmed!” NASA’s Mission Control erupted in cheers as the InSight mission landed on Mars on Monday. InSight spent seven months traveling through space to get to the Red Planet, and is expected to spend the next two years investigating what lies beneath Mars’s surface.

Central American Resource Center (CARECEN-LA)
・・・
One of the worlds most heavily militarized borders, fires tear gas and rubber bullets at asylum seekers in search of life of dignity & free from violence.

If you need anymore reasons to vote; here’s a great one.
———————————————— (Source: )
“Sen. Cindy Hyde-Smithe is under fire (and rightfully so) after telling Colin Hutchinson, a cattle rancher, that she'd be "on the front row" if he invited her to a public hanging 😒 The senator is currently in a run-off race for her seat against . Mississippi constituents can do their part and on November 27.”

Be the first to know and let us send you an email when Come So Far Politics posts news and promotions. Your email address will not be used for any other purpose, and you can unsubscribe at any time. 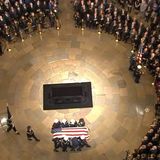 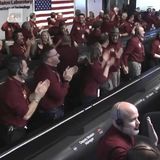 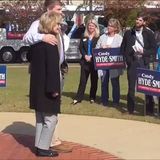