WBRC FOX6 News is the largest and most trusted news team in Alabama. We are On Your Side covering news, weather, sports, entertainment, and more.

The victim, who had been asleep in the back seat, said she woke up to the car being driven very fast.

The suspect faces multiple felony charges, including false imprisonment and possession of methamphetamine.

The man said he had never met the woman before.

Authorities say a woman has been arrested after she threatened to injure a man at a bus stop.

Some pushing for paid parental leave for state employees

It is a concept growing in popularity with Georgia, South Carolina and North Carolina all passing some form of paid parental leave over the last few years, and the City of Birmingham is the latest to do it.

The St. Clair County Commissioners say they are pleased with the progress the Environmental Protection Agency is making at the landfill.

The St. Clair County Commissioners met during their regular meeting Tuesday morning, and they say they are pleased with the progress the Environmental Protection Agency is making at the landfill.

Honoring an Alabama hero: family, friends, veterans and active military gathered today to honor the life of World War II veteran Gabriel Kinney, who passed away recently at the age of 101.

It’s official: Graymont Avenue in Birmingham will be repaved

It won’t cost the city of B'ham a dime because all the funding will stem from ALDOT’s Rebuild Alabama Act.

The heartbreaking letter from the homeless mother concluded by asking for her dog to not be abused. 😢💔

This cat may be down to eight lives now after being rescued from a busy interstate by a trooper and Good Samaritan.

This cat may be down to eight lives now after being rescued from a busy interstate by a trooper and Good Samaritan.SUBSCRIBE AND TURN ON NOTIFICATIONShttps:/...

John B. Harris is charged with the June 2022 murder of 82-year-old Jo Ann Henry Harris.

Tip leads to discovery of 130 counts of possession of child p**nography, drug paraphernalia

Freeman was taken into custody Tuesday afternoon and transported to the Cherokee County Detention Center.

Name a cockroach after your ex-partner for Valentine’s Day

You can give your ex something special on Valentine's Day! 💘

Sometimes love is not in the air on Valentine’s Day, but some unique options are still available to celebrate the holiday.

The plan was “a murder su***de in which she would kill herself,” police said. “But she decided she couldn’t go through with it.”

Sad. The report indicates two safety meetings were held shortly before the plane arrived to remind the crew that the engines would remain running and that the aircraft should not be approached during that time.

The National Transportation Safety Board has released its preliminary report into the deadly New Year’s Eve incident at Montgomery Regional Airport in which a member of ground crew personnel was “ingested into the engine” of a parked airplane.

Thank you to everyone who shared.

The Oxford Police Department is asking for the public’s assistance in their search for Megan Rebecca Carlisle.

Results released in girl’s request for DNA evidence of Santa

The results are in! A girl sent a cookie and carrot sticks to her town’s police department to ask if they can be tested for DNA. 🎅🍪🥕

Walmart workers to get pay raises next month

The newest pay raises brings the country’s largest retailer closer to many of its competitors.

Sad. The death comes just more than a week after two cage-tampering incidents at the zoo, including one that resulted in a clouded leopard's escape.

“I don’t think there are words to explain all the feelings,” Shiffrin said. http://bit.ly/3wKLDpj

Are you more productive in the morning or at night?

When Rylae-Ann was a year old, a rare genetic disorder kept her from even lifting her head. Her parents took turns holding her upright at night just so she could breathe comfortably and sleep.

Twitter has already been taken to court this month for falling behind on rent at another San Francisco office.

Suburban Detroit boy, 5, dies after wandering away from home

Officers searched the surrounding area before they found the Macomb County child Monday morning and took him to a hospital, where he was pronounced dead.

The Clinton Township Police Department said officers were sent to search for the boy after he was reported missing Monday from his family’s home.

We're on YouTube! Subscribe to the WBRC FOX6 News YouTube channel. ▶️ You’ll find a variety of videos including First Alert Weather, 6 On Your Side Investigates, drone footage from the WBRC FOX6 SkyTracker, viral videos, and much more.

Caught on camera: Girl helps save great-grandma trapped under SUV

A doorbell camera captured a terrifying moment for a Michigan 7-year-old as she rushed to help her great-grandmother.

Mariah says when her great-grandmother tried to stop the rolling SUV Wednesday, her leg and foot got stuck underneath it.

For our animal lovers, it might be worth it to introduce a few chickens into the mix! 🐓

Around 70% of tickets for major concert venues in the U.S. are sold through Ticketmaster, according to data in a federal lawsuit filed by consumers last year.

Ticketmaster eventually canceled a planned ticket sales to the general public because it didn’t have enough inventory.

Six decades into his career, the singer-songwriter, author and activist is still going strong, with new album “I Don’t Know a Thing About Love” coming in March. http://bit.ly/3XWKNBl

The 16,000-square-foot facility, housing 32 recliners and 16 observations beds, will provide services to stabilize and monitor those undergoing a mental-health or substance-use crisis and connect patients to community services. http://bit.ly/3Hq6ap0

Patrick Crusius is still charged in state court with capital murder and could still face the death penalty in Texas if convicted in the 2019 mass shooting that killed 23 people.

4 arrested in connection with LSU student who died, authorities say

After two years as offensive coordinator and quarterbacks coach at the University of Alabama, Bill O-Brien is reportedly leaving Tuscaloosa to join the Patriots coaching staff.

After two years as offensive coordinator and quarterbacks coach at the University of Alabama, Bill O-Brien is leaving Tuscaloosa according to reports.

Be the first to know and let us send you an email when WBRC FOX6 News posts news and promotions. Your email address will not be used for any other purpose, and you can unsubscribe at any time.

3 killed in University of Virginia shooting

Officials give an update after 3 people were shot and killed at the University of Virgina last night and the suspects remains at large. https://bit.ly/3X1O4zl

The #WBRCSideline Game of the Week saw Winston County foes Addison and Lynn face off in the second round of the AHSAA Playoffs. https://bit.ly/3NA9OhA

Parker High School's Ashton Ellison is a senior for the Thundering Herd, but also spends time volunteering for his church. He is your #WBRCSideline Plays That Matter! https://bit.ly/3SSszOe

Your #WBRCSideline Fan of the Week is 5th grader Jacoby Johnson! The Homewood Patriots' biggest fan hangs out with the team in the locker room and knows practically everyone in the stadium! https://bit.ly/3Tci2h7

This week's Drive of the Week took us 90 miles to Cherokee High School where the Warriors took on West Morgan in a second round playoff game! https://bit.ly/3fEmmrN

Enjoy the sounds of the Dora High School marching band, this week's Sideline Band of the Week! #WBRCSideline https://bit.ly/3sE3ITT 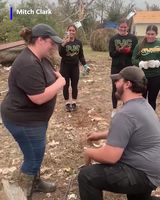 ICYMI: SHE SAID YES! This man didn't waste any time getting down on one knee after finding an engagement ring that was lost after a tornado went through.

Mountain Brook's Cole Gamble ran for 234 yards and 6 touchdowns against Pinson Valley making him your Sideline MVP of the Week! https://bit.ly/3WwCe00

The Mortimer Jordan Blue Devils are your Sideline Cheerleaders of the Week! https://bit.ly/3TU2yzu

The second week of the Playoffs have wrapped up and Sideline is here to give you highlights! http://bit.ly/3iryMSf #WBRCSideline

Get Those Coats Ready

A great Veterans Day Parade in Birmingham! Thank you to everyone who came out to support. 🇺🇸 http://bit.ly/3NXlvis

Clare Huddleston WBRC has some breaking news out of St. Clair County and a look at weather as Tropical Storm Nicole moves close. https://bit.ly/38b0CjF

WBRC FOX6 News is proud to once again partner with the Salvation Army for our annual Gifts for Kids Angel Tree program. The Gifts for Kids Angel Tree program is a way for people to donate Christmas gifts to foster children and children in need during the holiday season. You can purchase gifts or make a financial donation to The Salvation Army. Your donation will be used to buy clothing and toys for children on their Angel Tree list. If you're interested in giving back, or for more information, visit the link: http://bit.ly/3F5DFZH

Pell City Sheriff Murray has an update on a recent death investigation. https://bit.ly/37l8wmQ

Clare Huddleston WBRC has a look at weather changes & where we're at with Midterm Elections. https://bit.ly/3jg8aRF

We're live at a fire in Wylam. One person has been loaded into the back of an ambulance. We're working to get more information. https://bit.ly/3UfdJTz

Clare Huddleston WBRC has a look at the top stories on this Election Day in Alabama! https://bit.ly/3jg8aRF

Coach Saban speaks after Saturday’s loss to LSU. Alabama, now with two losses and no longer in control of the SEC West, will travel to Ole Miss next week. https://bit.ly/3EcH5MK

Clare has more about a man arrested Sunday after a police chase in St. Clair County.

When posting comments, photos, video, or links, you give WBRC FOX6 News the right to republish your posted content to any of our digital platforms and on-air.

We encourage comments on the stories and topics we post throughout the day. We appreciate thoughtful debate and that includes respectful disagreement. Comments must REMAIN ON TOPIC. Comments violating this policy, including name-calling, hate-speech, threats, or anything else not appropriate may be hidden or deleted and users may be blocked from making future comments. Please let us know if you see anything you feel is in violation of our commenting policy.

Other TV Channels in Birmingham

I've been trading with Mr Ralph Carico for at least 2 years and so far, he’s very good, intuitive Trader, honest, and you can trade fractional shares, which is a huge advantage for those who are starting out with smaller accounts/amount. Plus, He’s trustworthy and regulated account manager Ralph Carico
We want Justice for Dee!!!
https://www.facebook.com/100001674933717/posts/5891283117604128/?app=fbl
Please help this faimly
Where's the story about the Governor of Alabama being inaugurated today? Can you not cover a bit of State news on TV also? It would be good to hear a bit of good news along with all the bad stuff. I noticed you buried the story on wbrc.com.
What a beautiful sunrise in Warrior this morning
Watching the news this Sunday evening and am so impressed with the young lady doing the weather. Don't know her name but she is doing the station proud.
Tornado Damage Area In Coosa Country.. Just A Few Pictures.. Alot Of Damage... Nixburg Area Rehobeth Area...
How do I find the video I saw earlier this morning about the woman telling about the illegals trying to get into her house, even though she had a rifle pointed at them?
I've looked everywhere on your site and found nothing.
https://youtu.be/PkXTRZdrXaM
https://lm.facebook.com/l.php?u=https%3A%2F%2Fwww.al.com%2Feducationlab%2F2023%2F01%2Fcullman-city-school-files-criminal-charge-against-student-with-disability-claims-harassment.html&h=AT348PLrby25W69vta4wKglHwBn9XevY7TbYCVQXqQp-jIvVRnqd1_W7gr2NNsNvRkWNlStl83PYZ6rblEFYlCG4_ac81QPVKlCsm2n0L9ZcegznbQf9ekTj5h4i2z-79Ln_
It's raining hard in Pell City. After checking, I found the flooding street is due to clogged drains.
Hopefully Sumpter Landing / New Castle Builders will correct the problem.
Chelsea, Alabama Took this picture about 15 minutes after it fell so it had already melted some.
x

Other TV Channels in Birmingham (show all)