We are a Film Production service, We shoot, edit, and produce videos for any cause needed at affordable prices to meet your budget. Contact us for info.

Don’t forget to come out this year!

The Guitarist - The 7 Basic Shot Types

The Guitarist - The 7 Basic Shot Types Full Sail University - Student Assignment This is a Digital Cinematography assignment, a student made short to demonst...

Who's got some creative ideas for short films? Let's collaborate!

Rone and Jacob met up with the guys and gals from Bridgeforth Design Studio, Renegade Faction, and Playable Characters!

The first cut is complete for Conapalooza 2018! Check out the link here. If you were at Conapalooza, please share with all of your friends.

Official Conapalooza 2018 Highlight. Thank you so much to everyone who worked so hard to make this convention possible. http://www.conapalooza.com/ https://w...

Be sure to tune in to 92.9 this morning at 10:30 AM to hear our interview with Supertalk Morning Show about our upcoming feature film Inducted w Chelsea Nicole Lambert & Thom Reed

This morning, I'll be going all the way back to 1969 to discuss the film INDUCTED The Movie - UFO Monument, Sheffield MA. Inducted is film based on the Thom Reed UFO Incident & how it became our Nations 1st UFO case to be officially inducted into State, as a "True & Historically Significant" event. I'll be joined in the SuperTalk 92.9 studio with special guests Thomas Reed, James Keitel & Chelesa Nicole Lambert. See you from 9 to 11 for this exciting show!

Happy Halloween, We hope all of your spooky ideas come to life!

The making of the SAW II Amanda's trap the needle pit enjoy it.

Just so everyone knows, Dark Star Films and Primordic Studios offers music videos for as low as $250. Any bands that are interested don't hesitate to message us here on Facebook or text/call (423) 612-5689

Conapalooza 2018 has been amazing so far. Here is a quick cut from Fridays fun.

Remember Conapalooza 2018 will be held at MeadowView Convention Center in Kingsport, TN. Be sure to get your tickets and come join all the excitement. Here is the video coverage from last year.
https://www.youtube.com/watch?v=WGwItsPE44Q

Reviewing some footage from the shoot today.

Primordic Studios is a Tri-Cities based Film Studio located in Erwin, TN, with full "in-house" production capability for your next project

Remember Conapalooza 2018 will be held at MeadowView Convention Center in Kingsport, TN. Be sure to get your tickets and come join all the excitement. Here is the video coverage from last year.
https://www.youtube.com/watch?v=WGwItsPE44Q

On set for Below 7

Here is just some behind the scenes footage on set for a music video we recently helped with. Audio removed for Copyright purposes.

Throw back to last weeks episode of Tasty Jamz with The Buddz.

In case you missed it last night, here is Episode 4 of Tasty Jamz, featuring Matt Smile and Scott Smile from The Buddz.

We're excited to present to you episode 4 of Tasty Jamz filmed in Erwin, TN. Today's special guest is Matt Smile and Scott Smile from "The Buddz." This podca...

A little more time will be required for this weeks episode of Tasty Jamz, due to all it’s awesomeness. Keep a lookout for the episode to air on YouTube tonight around 10pm.

Live here at Quantum Ascension Studios with our crew and Chelsea running cameras. We’re here with The Buddz! Both Matt Smile & Faysal Smile

Episode 3 of Tasty Jamz is here! Featuring Bound By The Crown! Check it out and let me know what you think in the comments.

Welcome back to the Tasty Jamz Podcast! This episode we have a few members from, "Bound By The Crown." Today we will be discussing Death Metal. Also joining ...

Tasty Jamz is a video podcast for Rock and metal musicians, where we discuss band related topics to give insight to what it's really like in the extreme music industry. Episode 2 is here with Arm The Witness as our guest. If you like the show please subscribe as it will help us and the bands out a lot.
https://youtu.be/lNNeAaK6Rg0

Welcome back to the Tasty Jamz Podcast Everybody! On this episode we sit down with the band, Arm the Witness, to discuss the styles of their music, the impor...

A few slots are opening up for music videos. Here is our latest that we filmed for Arm The Witness.
Message us to book a time and conference. We’ll get started ASAP. Looking to put out some quality content this summer!

We wanted to say thank you to all of the support we have had lately. It goes without saying that we could not do this without you and for that we will continue to work hard and bring you bigger and better content.

Podcast at the studio! Know any local bands who would be interested in being interviewed on our podcast? Tonight with Dark Star Films on Tasty Jamz w/ Jacob Hart hosting tonight’s episode 1 with our guests BIG MSTR 🎥
This episode will be up by Friday on our YouTube channel linked below. Check it out! We will be posting new podcasts every Friday as long as time permits.
Share this post with other musicians looking for a platform to speak about their talent.
#tastyjamz #localmusic #bigmstr #darkstarfilms #music

The hard rock/metal show "Tasty Jamz," will be shooting tonight. It will be aired on Friday. Our first guest tonight will be BIG MSTR. We will be discussion topics for Rock and Metal musicians. To catch the first episode please subscribe to the channel below.
https://www.youtube.com/channel/UC4Cfibvfm0RT3tOyCDPGxVQ

In case you missed it, we are proud to share our latest music music, performed by Arm The Witness. This band is awesome so please go check them out at https://www.facebook.com/armthewitness/
A lot of hard work and creativity went into creating this video at Quantum Ascension Studios.

Proud to debut our brand new music video Newborn.
Check it out and share it around everywhere!

Finished wrapping up production for Arm the Witness. At Quantum Ascension studios. We are Looking forward to seeing the final result. If you or someone you know are interested in making movie magic, hit us up.

One of the shots we did for the Kygo feat Miguel - Remind Me to Forget music video. Thank you to the DP @robwittdop for the footage!
.
🔃 Camera Control

When in doubt - take the window out. 😉

Mattie Kole - All by Myself

It's finally here, Mattie Kole's debut single, All by Myself. we had a blast filming this video and can't wait to film some more. Mattie, it was absolutely a blast shooting this with you, and we look forward to working together in the future. If you like this video please subscribe.
https://www.youtube.com/watch?v=uv78YI9O9mQ

Here is Mattie Kole's debut song titled, All by Myself. This music video was produced and filmed by Dark Star Films - directed by Chelsea N. Lambert. https:/...

Be the first to know and let us send you an email when Dark Star Films posts news and promotions. Your email address will not be used for any other purpose, and you can unsubscribe at any time. 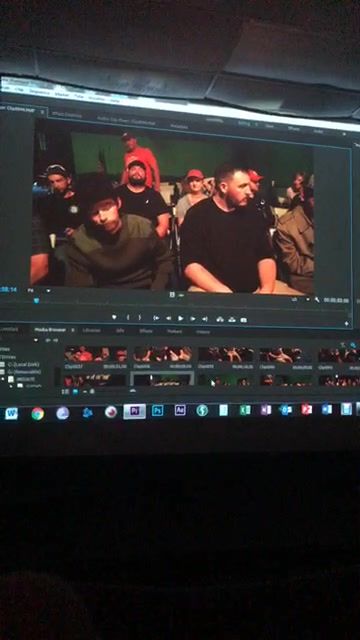 Reviewing some footage from the shoot today.

On set for Below 7

Here is just some behind the scenes footage on set for a music video we recently helped with. Audio removed for Copyright purposes.

Live here at Quantum Ascension Studios with our crew and Chelsea running cameras. We’re here with The Buddz! Both Matt Smile & Faysal Smile

On the set with Arm The Witness. Finishing up a few shots for the night.

Film Practice with the crew

Film Practice is so much fun!

Film practice with the crew!

Here is the Conapalooza Kids Costume Contest from last Saturday. From Conapalooza With Leegan Productions

Yesterday, We went behind the scenes at RobCon 2017, We were met with resistance.

SPITE playing at The Hideaway.

Check out this band Spite! Hardcore insanity, but in a good way!

Here's another live performance from Insvrgence!

Bodysnatcher performing At The Hideaway.

At Night They Return for more head banging action!

Here's another live performance from Arm The Witness these guys put on a killer show!

At night they return

Arm The Witness at The Hideaway.

Dark Star Films is a team of talented film makers eager to film your next project. DSF has got you covered on all stages of Video Production. We cover small events, concerts, music videos, documentaries, short films, feature films, and even weddings. We keep our rates low, and are willing to work with almost any budget, big or small. Interested in studio production, we have that covered. Our proud partnership with Primordic studios has allowed us to have access to their film studio to meet all of your quality standards. Shooting in a film studio allows for an extended range of control, with lighting, audio, ADR, film scoring, and even set construction. To see more information about Primordic Studios, check the link below. https://www.primordica.com/

Other Film & Television Studios in Bristol