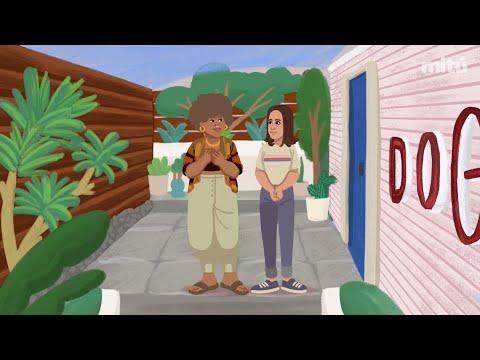 For the Love of the Neighborhood: Natalie Garcia and MaeDay Rescue - mitú

We completed 20 short films in 2021 and contributed animation or graphics to 5 more. So far 2022 looks like it will exceed that count (eek!).
Here's the first of three we did with We are mitú. It features dogs.

Heroes exist everywhere, in every neighborhood. They’re ordinary people with an extraordinary love for their gente. And it’s that love that gives them the st...

Four of our pieces playing at IFC Center this month:

The Great Thanksgiving Listen is a project to collect the voices of this country and to transform the holidays into a time of intergenerational listening and sharing. The concept is simple: honor someone in your life – a grandparent, a sibling, a mentor, or a friend – with a StoryCorps interview...

I addition to animation, we did the titles (as seen below) for Andy Ostroy's Adrienne. Premiering at DOC NYC on Sunday.

I addition to animation, we did the titles (as seen below) for Andy Ostroy's Adrienne. Premiering at DOC NYC on Sunday.

"September 12th" made with StoryCorps is an Oscar qualifier.

Check out the list of qualified shorts along with their trailers.

Very excited to share news on the premiere of "Adrienne" at DOC NYC. Adrienne Shelly's (star of one of our favorite films "Trust") husband tells the story of her life and afterlife.

It was a tremendous honor to contribute animation and titles.

Premiere of documentary on the life and afterlife of Adrienne Shelly, directed by her husband Andy Ostroy. Animation and titles by Ace & Son Moving Picture Co., LLC

We'll be participating in Red Hook Open Studios this weekend.

Come on by and see some art, and whatever the heck we do!

We'll probably have the grill going (Veggie Burgers, etc) and the bar is always open (because no one in the studio drinks but it's fully stocked for some deep psychologically tortuous reason).

September 12th: Reflections on September 11th From an Airline Worker

One of two pieces in commemoration of the 20th Anniversary of 9/11.

A Certain Kind of Love | #StonewallOutLoud

This is one of our favorites.

Lola’s Work | We Belong to Each Other

Lola’s Work | We Belong to Each Other

Some more sage YouTubing. Sage as in -it stinks!

Five helpful pieces of advice for folks looking to get work at an animation studio (or in the field of animation in general).Title card photo credit: https:/...

Ghosts! Talking about the paintings of animator Fred Mogubgub

We've begun YouTubing. It's all over now.
https://youtu.be/stL6RfK1gJo

Playwright Arthur Kopit died on Friday. Fred Mogubgub created an animated intro to the Broadway production of his first play, "Oh Dad, Poor Dad, Momma's Hung You in the Closet and I'm Feelin' So Sad".

Playwright Arthur Kopit died on Friday. Fred Mogubgub created an animated intro to the Broadway production of his first play, "Oh Dad, Poor Dad, Momma's Hung You in the Closet and I'm Feelin' So Sad".

Viewer mail:
"Both the story, the telling of it and the wonderful, sensitive graphics made me teary. Just beautiful."

John Washington, 95, was born blind and with a severe loss of hearing. He sat down with his eldest child, Melva Washington Toomer, for a conversation about the pride he takes in his kids and to laugh over some of their childhood hijinks. storycor.ps/3bAfST6

Getting, as it Were, to Jupiter

For more appearances and screenings check our events page:
https://www.aceandson.com/screenings

When our friends at StoryCorps shared this recording, they were unsure what to do with it. It wasn't part of the planned season of animation and didn't fit into any of our ongoing partnerships.

Still, they felt it was a powerful piece that needed to be heard. We came up with an approach that (we hope) conjures the right intellectual and emotional reactions while working with tighter than usual logistics.

Active shooter drills have become integrated into schools across the country. In this StoryCorps animation, listen to ten-year-old Dezmond Floyd’s open discussion with his mother Tanai about what happens in his fifth grade class during his school’s active shooter drills. storycorps.org/animation/the-drill/

Los Angeles friends: one of our favorite pieces is screening at LAMOTH on Sunday with two other shorts. Come see Sarah Kamaras' "Sarid Family" for we which created a few minutes of animation.

The Museum offers tours to students and adults of all ages. Our staff is able to tailor each tour to meet specific needs in an age-appropriate manner. All Museum tours are FREE.

Added a page for public screenings to the website!

We recently made minor contributions to this moving #OpDoc by Deborah S. Esquenazi for The New York Times
#animation #documentary #immigration

Opinion | The Trauma of Sanctuary

We made minor contributions this incredible #OpDoc by Deborah S. Esquenazi for The New York Times #animation #documentary

Years living as an undocumented immigrant taught me not to believe in the American dream.

Some our films screening at IFC Center in the upcoming months.

In honor of the 50th anniversary of the Stonewall riots, StoryCorps hopes to inspire Americans to create the largest collection of LGBTQ voices ever gathered. Deepen your understanding of the lived experiences and resiliency of everyday LGBTQ people through these ten stories from StoryCorps. Find ou...

A Short Time with Suzan

Our colleague Suzan Pitt died this weekend. She was an all-time great.
https://www.aceandson.com/newblog/2019/6/17/a-short-time-with-suzan

This Saturday in Bethlehem, PA I met George Nicholas at the South Side Film Festival. His film, Smoke -N- Suds , played with our film Ride in a short animation section. That program also included my current favorite festival film Take Rabbit , a rare piece that includes a real Virginia Woolf con

Illustration from the East Village Other by Fred Mogubgub

Cleaning up some #animation of @mauricevellekoop art by @crimmas for @storycorps

Coming up in March
http://www.ifccenter.com/series/short-attention-span-cinema-storycorps/

These four love stories from StoryCorps reflect on lives lived in partnership and the surprising places you might stumble upon the person who makes your life complete. A different film from the program plays each week before our regular features—see schedule below. Visit storycorps.org to learn mo...

Our pal Kelly Gallagher is running a weekend workshop UnionDocs. Sign up. Richard O'Connor will be presenting on Sunday, may bring bagels.

Be the first to know and let us send you an email when Ace and Son Moving Picture Company, LLC posts news and promotions. Your email address will not be used for any other purpose, and you can unsubscribe at any time.

Cache Cache - Dinner and a Movie

Over a year and a half after we did our first test film for "The Naked Campaign", the series for The New Yorker/Sundance wrapped the day after the election. Gail Levin directed. Steve Brodner was the "talent" -writing, illustrating, hand modeling. Ben Shapiro shot. Music performed by the legendary Jon Faddis.

In January of 2007 Gail Levin asked if we were willing to team up with Steve Brodner to develop a mix of cartooning, animation, political commentary, art process and video around the upcoming election. At the time, Barack Obama was thought to be an "also ran", either running for the VP nomination or positioning himself for more influence in the Senate and another run at the White House in 2012 or 2012. But we thought his 2004 speech was a good starting point -even though I thought he had no chance -and Brodner liked to draw him, so this is what we produced as a "pilot". The New Yorker and Sundance would later pick up the series and we produced over 30 of these films. Christina Capozzi Riley did the animation.

Bandleader Chris Calloway Brooks details what made his grandfather's band distinct from the other big bands of the era. This is from Gail Levin's "Cab Calloway: Sketches" which I worked on with Asterisk Animation. Christina Capozzi Riley did the animation after French illustrator Cabu. Pascal Akesson edited.

Leetle clip of Tissa David from a "making of" a commercial video at The Ink Tank.

Is Stepford Right for You?

This is sequence I produced and co-directed for Frank Oz's Stepford Wives. Designed by Phil Marden. Animated by Doug Compton.

Harrison Ford stopped by the office.

The Ant & The Grasshopper

Short film for PBS/Need to Know

This is a short we cut for Gail Levin a little while back. Shot by Ben Shapiro. Dug it up, now yours to share.