UP & COMING RADIO STATION
BEAT OF THE CARIBBEAN & THE WORLD Beat of the Caribbean /
I Rock- 95.1 FM. net /
Island Radio Station.net

The Weeknd "Earned It"

Despite the oil crisis, BPTT spent US$1.5 billion on operations here in Trinidad and Tobago in 2015 and remains optimistic about the future. The Regional President of BPTT, Norman Christie, said there are four ways the company is taking advantage of the downturn: sticking to core values, improving competitiveness to attract investors, focussing on the future and treating employees with care and empathy. Read More: http://ow.ly/Xg9Yq

This Thursday 21st January 2016, the Queen of Bacchanal blazes the pavement for Next 99.1 fm and Digicel's "One Jammin Street Party," so bring your coolers, bring your friends and come down to #11 A Maraval Road Port of Spain. Music pumps from 7 pm- 10 pm.

Prime Minister Dr. Keith Rowley says he's prepared to go to court amid allegations that his cabinet acted illegally when it decided to lower the ceiling for a person to get an HDC home from 45 thousand to 25 thousand dollars.

Yesterday Opposition leader Kamla Persad Bissessar described the move as draconian and autocratic, and said it would lead to thousands of hard working citizens being struck off the list of eligible persons who had successfully applied for homes from the HDC.

However Dr. Rowley sought to clear the air on the matter....

As we continue our series to highlight Multiple Sclerosis Awareness Month, C News Reporter Marie Hull brings us the story of retired Senior Lecturer and former Government Minister Dr. Daphne Phillips who has been living with the disease for 15 years.

The best Caribbean Cuisine is coming to Miami
Get your tickets here: http://bit.ly/1FbjFhI

Taste of the Caribbean is around the corner... can't you just taste it! Buy your tickets here: http://bit.ly/1FbjFhI #CHTATASTE

Miami Readies for Taste of the Caribbean Food Festival

Miami Readies for Taste of the Caribbean Food Festival

Mark your calendars, South Florida-based Caribbean cuisine lovers, because Taste of the Cari

Point of View: Tourism Competition Is Not A Guessing Game

Point of View: Tourism Competition Is Not A Guessing Game

By Sir Ronald Sanders*, Editorial Tribune 242. Bahamas.- The performance of only five of the ...

T&T's Women's 4x100m Relay Team produced a season best time of 42.87 to qualify for the final of their event at the IAAF/BTC World Relays in Nassau Bahamas.

An epic battle of culinary stars is about to commence on June 12th. Who will be the ultimate winner of Taste of the Caribbean?
May the force be with you all. #MaytheFourthBeWithYou
http://bit.ly/1DF52lD There is still time to be a sponsor of the biggest culinary event in the Caribbean! Call 305-443-3040, send an email to [email protected] or click this link http://bit.ly/1QPUiv9

Are you ready for the best desserts in the Caribbean?
Hold on to your taste buds! http://bit.ly/1cghQJg

T&T’s Men’s 4x400m relay teams of Lalonde Gordon, Jarrin Solomon, Renny Quow and Machel Cedenio have qualified for the final of their event at the IAAF/BTC World Relays in Nassau Bahamas. Team T&T posted a time of 3:02.09s the fastest of the preliminary round.

Top 10: the best spa hotels in the Caribbean

Top 10: the best spa hotels in the Caribbean

A guide to the best spa hotels in the Caribbean, including the top places to stay in St Lucia, Barbados, St Barths and Grenada, featuring yoga, pilates, tai chi, soothing treatments, beachside massage and healthy eating

Puerto Rico Tourism Company’s Executive Director, Ingrid I. Rivera Rocafort, announced a new direct flight offered by Mexican airline Volaris from Cancun, Quintana Roo to San Juan, Puerto Rico and connecting with Mexico City. Volaris is the Mexican low-cost airline with more routes in Mexico and the United States. This route will begin operating on a weekly basis as of July 2, 2015, every Thursday and Sunday. [ 751 more words. ]

Service between New York JFK and Antigua to Launch November 5

Service between New York JFK and Antigua to Launch November 5

TTC Special: Plane flies out of fuel over the Pacific Ocean

TTC Special: Plane flies out of fuel over the Pacific Ocean

TTC Service.- Imagine a near future in which a plane solar-powered drive you to the most remote place in the world after paying a much lower passage that required by oil prices. [ 459 more words. ] 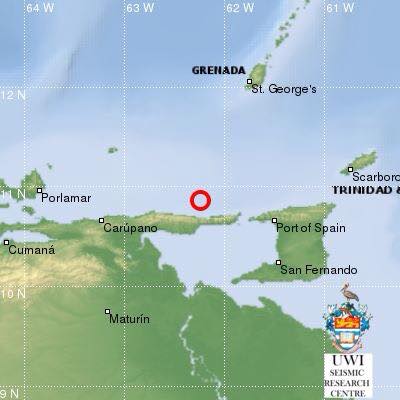 The UWI Seismic Research Centre has confirmed that a magnitude 4.8 earthquake took place 85 km WNW of POS at 3:11 am this morning.

KINGSTON, Jamaica — United States President Barack Obama said Thursday that the State Department had completed its review of whether to remove Cuba from its list of nations that sponsor terrorism, but he added that he had not yet received a final recommendation and was not ready to announce a decision.
“Our emphasis has been on the facts,” Obama said of considering Cuba’s removal from the State Department’s terrorism list, where it has remained for more than 30 years.
Removing it would clear a major obstacle to the re-establishment of diplomatic relations, as the two former political enemies advance toward their closest ties in half a century.
The review was ordered by Obama in December, when he and President Raúl Castro of Cuba agreed to restore diplomatic ties and move toward normal relations. The State Department looked at whether Cuba had engaged in terrorism activity in the last ...

T&T’s PM, Kamla Persad-Bissessar, says she is very concerned of the threat of terrorism, not only to T&T, but for the entire Caribbean region. Speaking ahead of today’s meeting of CARICOM leaders and the United States President, Barack Obama, at the Mona Campus of the University of the West Indies, Mrs. Persad-Bissessar said it was Trinidad and Tobago and Jamaica who co-sponsored the United Nations resolution last September in New York, to deal with threats in the Middle East. Read More: http://ow.ly/LolBC

It's the news that left European and US markets shell-shocked - the oil giant, Royal Dutch Shell, has agreed to buy the oil and gas exploration firm BG Group for US$70 billion, making it the biggest energy tie-up since the ExxonMobil deal in 1999 which currently puts that company's worth at some $382 billion. Read More: http://ow.ly/Lo5bs

Prime Minister Kamla Persad-Bissessar SC, left front row, with United States President Barack Obama and other Caribbean Community (CARICOM) heads of State and Government prior to a meeting with leaders of CARICOM countries at the Mona Campus of the University of the West Indies, Kingston, Jamaica, this afternoon. Persad-Bissessar, as lead Prime Minister in charge of crime and security, raised certain matters with the US President - matters which would have a serious impact on the Caribbean, if not dealt with now.


Energy, security and trade are expected to top the agenda of United States President Barack Obama’s meeting with Prime Minister Freundel Stuart and other leaders of the 15-member Caribbean Community (CARICOM) in Jamaica today.
U.S. President Obama is greeted by Jamaica’s Prime Minister Simpson Miller as he arrives aboard Air Force One at Norman Manley International Airport in Kingston

The president received a warm welcome when he arrived in Kingston on Wednesday for the Caribbean summit, which analysts say he will use to seek to reassert US leadership in the region at time when oil-producing Venezuela’s economic clout may be receding.
As the first U.S. president to visit Kingston since Ronald Reagan in 1982, Obama faces the challenge of convincing Caribbean island leaders that Washington is genuinely re-engaging after a long period of perceived neglect of its smaller, poorer neig ...

PM Kamla Persad-Bissessar and other leaders of CARICOM countries met with US Barack Obama, this afternoon at the Mona Campus of the UWI in Jamaica. During the meeting Persad-Bissessar expressed concern over of the threat of terrorism, not only for this country but for the entire Caribbean region.

Be the first to know and let us send you an email when Island Rock FM .Net / Drew Media Inc Corporation posts news and promotions. Your email address will not be used for any other purpose, and you can unsubscribe at any time.

Other Radio Stations in Brooklyn