Our 2022 Musical Salute Gala honoring Chita Rivera and Danny Burstein will be held on March 20th at the National Arts Club in NYC! https://enot.betterworld.org/auctions/musical-salute-2022

Keeping American Opera Thriving
Focusing on the creation, development and production of new and classic American opera in ground-breaking productions, Encompass New Opera Theatre is one of the foremost leaders in the United States and New York City in charting a whole new ground for American Composers since 1975. Encompass has produced over 61 full-scale operas with orchestra and staged readings of more than 160 new works, from jazz and cabaret to musicals and opera

Thank you to all the singers, musicians, and speakers who made the Encompass Musical Salute Gala honoring two luminaries of the Broadway Theatre, Chita Rivera and Danny Burstein, so thrilling! It was a night full of smiles, laughs, and tears of joy; it is a night we will always remember. Thank you to all the individuals and organizations who attended and generously donated to make this gala such a success.

She’s all that jazz! With a career spanning over 70 years, Chita Rivera is a legendary theatrical icon! She originated the roles of Anita in West Side Story, Velma Kelly in Chicago, and the title role in Kiss of the Spider Woman. We are thrilled to be honoring her and the Tony-Award winning Danny Burstein, on March 20th, at the Encompass 2022 Musical Salute Gala! - https://mailchi.mp/encompassopera/ready-set-bid-a-musical-salute-auction-is-now-open-875012

Our 2022 Musical Salute Gala is about to burst through the doors! We are thrilled to be honoring Danny Burstein (@DannyBurstein), the 2020 Tony Award winner for Best Featured Actor in a Musical for his performance as Harold Zidler in Moulin Rouge! The Musical.

Going, going, going, gone! This beautiful scene above is of the Fairmont Kea Lani, Hawaii's only luxury all-suite and villa oceanfront resort. You now have a chance to win a 7 day/6 night trip to this heavenly destination. Come join us for A Musical Salute! Gala Auction, our online silent auction, which is running in conjunction with our 2022 Musical Salute Gala honoring the legendary Chita Rivera and Tony-Award winning Danny Burstein on March 20th. Not only are we offering tropical getaways but also Broadway memorabilia and gourmet meals straight to your home.

Don’t miss out on these wonderful prizes!

“Sometimes, music is the only medicine the heart and soul need.” – During consequential moments like this, music is a language that can help unite us all! Stay strong everyone ❤

We are proud to announce that Encompass New Opera Theatre is hosting an online auction in conjunction with our 2022 Musical Salute Gala honoring the legendary Chita Rivera and Tony-Award winning Danny Burstein! We are offering up a variety of collectibles, from island getaways to sports tickets and Broadway memorabilia!

Join us March 20th, 2022 to celebrate Chita Rivera and Danny Burstein with exciting performances from the Masters of Music Theatre and Opera! https://t.co/goaO5TxQ1Z

Encompass New Opera Theatre is planning an online and live auction in conjunction with our 2022 Musical Salute Gala! Please consider offering an item. If you’re unable to donate an item and know of anyone who might be willing to participate, please share this link with them as well.

Thank you so much for your contributions and we hope that you will join us March 20th, 2022 to honor Masters of Music Theatre and Opera, Chita Rivera & Danny Burstein! - https://mailchi.mp/encompassopera/opportunity-to-participate-in-the-encompass-2022-musical-salute-auction

"Hate Cannot Drive Out Hate; Only Love Can Do That," - Dr. Martin Luther King Jr. Encompass commemorates the life and legacy of Dr. Martin Luther King Jr., Civil Rights Leader, Baptist Minister, and American Visionary. As we witness our country at its turning point, Dr. King’s legacy has never been more meaningful. We must continue to move in the direction of truth and justice even in the face of deep division.

For the well-being of our artists and audiences, we made the safe decision to re-schedule our Musical Salute Gala to Sunday, March 20th, 2022, due to the continual rise of Omicron Covid-19 cases.

For the well-being of our artists and audiences, we made the safe decision to re-schedule our Musical Salute Gala to Sunday, March 20th, 2022, due to the continual rise of Omicron Covid-19 cases.

"When somebody plays music, you listen. You just follow those sounds, and eventually you understand the music. The point can't be explained in words because music is not words, but after listening for a while, you understand the point of it, and that point is the music itself. In exactly the same way, you can listen to all experiences."

From "Still the Mind: An Introduction to Meditation"

It’s Monday and we are back in the office, but wishing we were keeping warm curled up next to a good book! Are you ready for another week? This week at Encompass we continue exciting plans for our Musical Salute Gala scheduled a few weeks after the New Year on January 30th, 2022. Tickets are on sale now! Visit our website encompasstheatre.org for more information.

It's that time of year when the spirit of giving is in the air, celebrate #GivingTuesday by donating to the Encompass New Opera Theatre 2021-2022 annual fund!

Become a first-time donor, or be one of the first 25 returning donors, and you’ll receive a CD recording of one of the many artists who have worked with Encompass.

A fitting quote for your Monday by the wise Jimi Hendrix, “music doesn’t lie. If there is something to be changed in this world, then it can only happen through music.”

Today world leaders and activists, like environmental activist Greta Thunberg, are meeting for the #COP26 climate summit to discuss our warming planet; but pledges without action will not be enough to avoid this continuing crisis. Countries around the world, including the United States, have failed to enact the proper climate change legislation needed to cut domestic carbon emissions.

Our hope relies on you, our community, and our city’s determination to fight the inaction of our elected leaders and spread the truth that we all must work together to save Mother Earth!

Take action with Greta, other youth activists around the world, and the whole team at Avaaz . Add your name to the Emergency Appeal for Climate Action petition!

Stars from Only Heaven

Following in the footsteps of Marian Anderson, here is a recording of "Stars" sung by Theresa Hamm-Smith from the Encompass premiere production of the opera, Only Heaven. Music by Ricky Ian Gordon.

Be the first to know and let us send you an email when Encompass New Opera Theatre posts news and promotions. Your email address will not be used for any other purpose, and you can unsubscribe at any time. 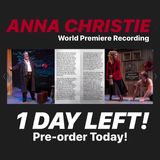 Our beautiful booklet for Anna Christie! Only 6 days left to help us make the Billboard charts! Hope you’ll join #teambillboard with a pre-order!! Available on Grammy-winning Broadway Records and all major online outlets.See ⬇️

THE MAKING OF ANNA CHRISTIE

Take a peak behind the curtain in this behind-the-scenes look at our cast recording of Anna Christie by Grammy-Nominated composer Edward Thomas and Tony-Winning librettist Joseph Masteroff. After a critically acclaimed world premiere production, the original cast along with conductor Julian Wachner and NOVUS NY came together in February 2019 at The Bunker Studio. Recorded by 12-Time GRAMMY-winning producer Thomas Z. Shepard, this riveting score on a unique melding of both operatic and musical theatre styles. Available on Grammy-winning Broadway Records and all major online outlets.

Jonathan Estabrooks on the recording process for Anna Christie.

Julian Wachner on the strength of Anna Christie: The Opera

Conductor and music director Julian Wachner speaks on the strength of Anna Christie as both an opera and now world premiere recording.

Nancy Rhodes on 'Anna Christie' as a true musical hybrid!

Nancy Rhodes talks about the music of Edward Thomas and how this dynamic piece stradles opera and musical theatre!

Thomas Z. Shepard on the music of 'Anna Christie'

Melanie Long talks about bringing Anna Christie to life and translating that in studio.

PREVIEW tracks from our World Premiere Recording of the new opera based on the Pulitzer-Prize winning play by Eugene O’Neill. Now in PREORDER! https://www.amazon.com/Anna-Christie-world-Premiere-Recording/dp/B07TNVX4RT

Our GoFundMe is LIVE! (https://www.gofundme.com/anna-christie-album) Help us bring ANNA CHRISTIE to the WORLD! We are extremely excited to announce the launch of our GoFundMe Campaign to help us complete our world-premiere cast recording, led by 12-time Grammy-winning producer Thomas Z. Shepard. Featuring: Julian Wachner, Melanie Long, Frank Basile, Jonathan Estabrooks, Joy Hermalyn and Mike Pirozzi. We have raised 75% of our budget, but need your help to mix, master, distribute and publicize the album. To our loyal audience and new friends alike, please consider our exciting rewards and join our team! We can't wait to bring this project to the world.

A sneak peak of our exciting multi-media production featuring some of our breathtaking projections for #TheAstronautsTale. COUNTDOWN: 8 DAYS UNTIL BLASTOFF! Video credits to Lianne Arnold.

Encompass New Opera Theatre is dedicated to the creation, development and production of adventurous new music theatre and contemporary opera, as well as the revival of important musical works by American and international composers. In the vanguard of companies devoted to widening the recognition of America's outstanding composers, dramatists, singers and musicians, Encompass has, since its inception in 1975, produced over 60 full-scale productions with orchestra and staged readings of over 160 new works from jazz and cabaret to musicals and opera.