It is with deep sadness that we mark the passing of Noah Eli Gordon, a great poet and friend. To celebrate his life, BAP is offering his book "The Word Kingdom in the Word Kingdom" as a free download, so that his work might reach readers old and new.

Celebrating Arisa White today, along with her poetic memoir, WHO’S YOUR DADDY, which has had such a tremendous impact on readers, and picked up a Finalist nod from the Lambda Literary Awards. Best of luck at the awards ceremony tomorrow, Arisa!

Big congrats to Arisa White, whose poetic-memoir WHO'S YOUR DADDY was shortlisted for the Maine Literary Awards!

3 finalist honors in 3 months: if you haven't read this book, what are you waiting for?

Congratulations Arisa White on having WHO'S YOUR DADDY named a finalist for a Goldie!

Tuesday poem #468 : Gregory Crosby : With My Own Hands

Tuesday poem #468 : Gregory Crosby : With My Own Hands

Little funerals full of tiny mourners, these hours. Wondering if it’s worth it to rob every grave, to drag the days back to the laborato...

Very excited to announce that Arisa White's poetic memoir WHO'S YOUR DADDY has just been named a Finalist for the prestigious 2022 Lambda Literary Award in Le***an Poetry!

Congratulations Arisa and all the Finalists!

If you haven't already, you can pick up a copy at AuguryBooks.com

Joining us for our fourth episode of Season 5: Telling Complex Family Stories is prolific writer Arisa White, author of the poetic memoir Who's Your Daddy (Augury Books). She's joined by our guest host Andre Bagoo -- we know the conversation to emerge will be rich and illuminating.

Be sure to tune in live!

"After Work" by Cameron McGill

"After Work" by Cameron McGill

from "In the Night Field" published by Augury Books 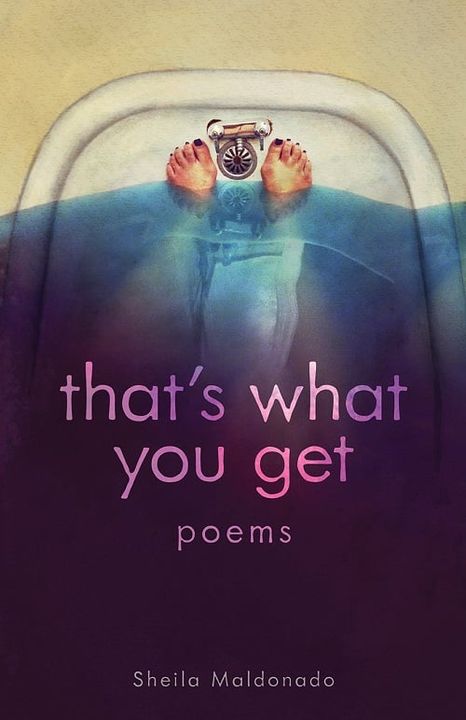 "Maldonado describes injustice, anger, and conflict in a style unwilling to dwell or become obsessively attached to what she cannot control."

Read up on this wonderful review of Sheila Maldonado's "that's what you get," up at Heavy Feather Review.

A: The role of the writer is 1) to write and 2) whatever that writer defines, for themselves, as their role should be. Although whenever I come across this question, I think of Hawthorne: “The ends of literature are, first, the pleasurable toil of writing; second, the gratification of one's family and friends; and, lastly, the solid cash.” (I suppose two out of three’s not bad.)

Gregory Crosby is the author of Walking Away from Explosions in Slow Motion and Said No One Ever , and the chapbooks Spooky Action at a Di...

Join us online this Thursday, 6/10, for the third and final launch party for Cameron Read McGill's debut poetry collection, IN THE NIGHT FIELD.

Cameron reads "The Orphan" section I. "Standing with a Horse on Inishmore, the Ending Starts."

Cameron reads "The Orphan" section I. "Standing with a Horse on Inishmore, the Ending Starts."

Reading of "The Orphan" section I. "Standing with a Horse on Inishmore, the Ending Starts" from the poetry collection, In the Night Field, forthcoming from A...

Cameron reads "Counting Down the Era" from IN THE NIGHT FIELD

Cameron reads "Counting Down the Era" from IN THE NIGHT FIELD

Reading of "Counting Down the Era" from the poetry collection, In the Night Field, forthcoming from Augury Books/Brooklyn Arts Press on June 1, 2021.©2021 Ca...

Reading of "William Blake & The Eternals" from the poetry collection, In the Night Field, forthcoming from Augury Books/Brooklyn Arts Press on June 1, 2021.©...

One of the silver linings of the global pandemic is that more attention has been paid to poets and poetry since the quarantine began. USA Today suggests we may be on the brink of a renaissance in the poetry world, while a PBS news story acknowledges that poetry has served as a shelter for the …

This Friday! Sheila Maldonado gets together with the Brooklyn crew for a reading at WORD Bookstore.

Join us tonight for Arisa White's launch party for WHO'S YOUR DADDY on Zoom at PRINT Bookstore, brought to you by MWPA & Mechanics Hall.

Cave Canem fellow mace dent johnson will be in conversation with Pamela Sneed ("Funeral Diva") and ("Who's Your Daddy") about their recent narrative poetry-centered memoirs on q***r life.

Over the next 3 days, Arisa White will be reading & conversing at Harvard Divinity School, New York University for Cave Canem, & at her PRINT Bookstore book launch.

Because these are ticketed Zoom events, be sure to RSVP early & get your spot! TONIGHT! 7 PM!
Sheila Maldonado's book party THAT'S WHAT YOU GET!
See below for details

Launch Party for Gregory Crosby's SAID NO ONE EVER

Keep your next Thursday open for Gregory Crosby's book party!

Join us in celebrating Gregory Crosby's second collection of poems, Said No One Ever!

Be the first to know and let us send you an email when Brooklyn Arts Press posts news and promotions. Your email address will not be used for any other purpose, and you can unsubscribe at any time.

Other Publishers in Brooklyn

Boredom-a Very Bad dream- ©2021js
She was bored
So tired of being bored
She joined a motorcycle gang
The application was hard
“Write an essay on someone
I killed”
Gave her a thrill
When she woke the
Next day
Ready for the test
The proctor
A tattoo in his hand
Read “I killed my mom forgive me
She’s dead. “
When you’re tired and bored
She had to say yes
The tattoo man
Read what she said
Girl you are mad but
You passed the test
Where’s your bike?
“I took a train”
He smiled and said
You’re a liar or a Fed
Told him to f**k off
“I came “on my horse”
So he poured her a scotch
Went to her head
Feeling her oats
Said let’s get out of town
“Not with a horse
I’d rather be dead”
She said wipe off that frown
He pointed to his bike
Get on he said
He pushed that thing to 103
Then they went to a bar
Sat on a stool
He said “how do u feel”
Said her ass still hurt
Told him he was her hero
Then he touched her breast
When they rose to dance
Saw the knife in his hand
Then he said
“Sorry dear, soon you will be dead”
Turns out that’s the last thing
He said
She smiled
Took the gun from her purse
Blasted him twice in the head
The cops didn’t come
Maybe she did
Then started for home
And went to bed

The end
You should never be closed for submissions. Look at the work of Fumihiro Matsuzaki, he goes by the name of matsubrooklyn on Instagram and he works as a picture framer at Pranayama art inc., in Brooklyn His work is stunning and accessible. If you actually look at his work on Instagram you'll know what I mean. It is perfect for a small handheld full color art book. They are to me the visual equivalent of Haiku. What comes to my mind as I look at the work is 'the sound of the brush'.
You should never be closed to submissions, look at the art of Fumihiro Matsuzaki who goes by the name matsubrooklyn on Instagram. He is a picture framer at Pranayama art Inc. He is as close to an untapped genius as I have ever seen. You publish him and you will never regret it.
https://youtu.be/sNZRYZWj8vQ
Hello! My name is Jillian and I'm a social justice poet from Buffalo. Please take a moment to watch my poem . If you like it, feel free to share. Thank you!!
x

Other Publishers in Brooklyn (show all)