CD Country 107.9 Your Home in the Country. Playing your Country favorites new and old. Listen on y

Your New Home In The Country, a different kind of country music station. Less repetition, more variety, more music, fun features, a great companion at work, or driving to and from, it's CD Country 107.9, WCDD! 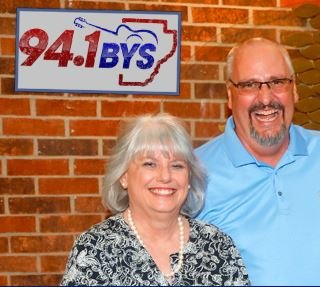 Join us for the Morning Mayhem on 94.1 BYS. We'd like to send you to see Josh Turner and Joe Nichols at the Knox County Fair. Be listening at 7:30a this morning for your chance to WIN. On Air at 94.1 FM or online at http://stream.941bys.com/

Yeah, that's us...Dennis and Jo from the Morning Mayhem on 94.1 BYS. We have a fun show planned for you this morning...we'd love for you join us. And, we want to make you a winner this morning. We're giving away tickets to see Josh Turner and Joe Nichols around 7:30a. The phone number to call and win is 309-647-1562. Join us for the Morning Mayhem with Dennis, Jo, and Mark Bixler on 94.1 FM or online at http://stream.941bys.com/

The Morning Mayhem with Dennis & Jo has your chance to WIN tickets to see Josh Turner and Joe Nichols at the Knox County Fair this Thursday night. And, they make the winning EASY. Just listen to 94.1 BYS around 7:30a tomorrow (Tuesday) morning and when Dennis and Jo says that it's time, simply call 309-647-1562. If you are the correct caller, you'll be the winner!! So, tune your radio to 94.1 BYS or connect to our stream at http://stream.941bys.com/ ... Tuesday Morning could be your lucky morning! Good Luck!

The music from CD County has moved to the new 94.1BYS, Country Favorites from Today and Yesterday. Help us choose our new logo. Let us know the one you like best by placing the number of your favorite in the comments below. Thanks for your help!

Due to the expected forecast weather conditions Macomb School District will be closed today, February 4. Later today an Arctic Front will travel through our area creating the conditions for a flash freeze in the late morning to early afternoon. The temperatures are forecasted to drop from the mid 30’s to the low 20’s in less than an hour when the front comes through immediately freezing the rain that is expected to be falling at that time.

It is important to note, when there is no school due to inclement weather, the day will be an Academic Engagement Day. Students will complete activities during their day off and the day will count as an instructional day for purposes of attendance.
MacArthur:
AM session will have a class meeting at 9 AM via Teams.
PM session will have a class meeting at 1 PM via Teams.
There will not be individual student meetings unless otherwise arranged.

MHS :
All students, Hybrid A, Hybrid B, and Remote Only students will join Teams per the Wednesday remote learning schedule.
You can find more information about the protocols for snow days and delayed starts by building on the district website.

If you have any questions pertaining to the activities teachers will be available throughout the course of the day via email. Thank you for your support as we work together on making the most of these days.

All events are cancelled for the day.

Conference call with the NWS early this morning . . . The forecast continues to call for rain, turning to snow, turning very quickly to frigid temps and strong winds. While we don't anticipate much snow, they are calling for flash freezing to begin in our area around noon. The freezing makes it dangerous to try and transport students home - even with an early release. All B-PC schools are closed today, Thursday, February 4. We will be using Friday, February 26 (previously an Emergency Day, as a student attendance day). Skylert scheduled to go to school families and staff at 6:00 am this morning. Safe travels everyone.

For those of you who live and/or work in Fulton County, Illinois, we'd like your feedback. Would you take about 3 minutes to take this survey about how you listen to radio? No personal information will be requested, but your feedback is very important to helping LOCAL Fulton County Radio evolve and ultimately serve you better. Thank you for your participation. Please COMMENT, LIKE, and SHARE to help promote the survey. https://l.facebook.com/l.php?u=https%3A%2F%2Fforms.gle%2FmLdrqctPA7sfMKrAA%3Ffbclid%3DIwAR0_PbZfhfmV0DgAZ3OnzU46ZTe9VRj90bPSd5ltOgjKRAthR33NNMzqUKk&h=AT1gLJnUr_SS4KFvUF8op0vc2bsIbCgEPnDUjzAWv1_upZfKT2IuDVj_TR-rU0XscNIqxWG6ig10hfJxTiU1RPuqBJlb4U8S3EMEvvYXKddVDmCb9lgIFZUmun6rZpDKbw&__tn__=-UK-R&c[0]=AT2ayFqLnyy7SCAWPR-fDGZpcMAmy9R_HGa4-YsQxtTTBcxeJIXjvFT1JbN4sZgYTpOvkP-GVywFzLOdeySz473R9BhFymhG3k3BfEo_s7C9UYZxN4kTU2ATw85lpYiSQ-Zd0M91PcXqzXc6z_qa5kqVxJS7qIBOTgS3777mlT9S0ODzMvvgSd9VRcXm7Gzs5jpJs7vcYbbfSbkaVdh95k8Rpw

Thank you for participating in the Fulton County Radio Listener Survey. Your answers to these ten questions will be used to help improve local radio in the area. This survey should only take about 3 to 4 minutes to complete.

Country legend Charley Pride has passed away at the age of 86.

The City of Canton's Public Works Department has a crew working on a water main break. It is at the intersection of Keeling Court and Birch Street. As a result, water has been turned off on Keeling between Birch and Vine Street and also on Birch to Avenue C while repairs are being made. It is unclear if a boil order will be issued at this time.

SRC’s may not be until tomorrow, however you can give anytime between now and tomorrow night, December 1st.

We Appreciate Your Service!!

The National Weather Service in Lincoln has issued a * Tornado Warning for... North central Fulton County in west central Illinois... Southeastern Knox County in west central Illinois... Northwestern Peoria County in central Illinois... * Until 315 PM CST. * At 251 PM CST, severe thunderstorms capable of producing both tornadoes and extensive straight line wind damage were located near Fairview, or 9 miles northwest of Canton, moving east at 50 mph. HAZARD...Tornado. SOURCE...Radar indicated rotation. IMPACT...Flying debris will be dangerous to those caught without shelter. Mobile homes will be damaged or destroyed. Damage to roofs, windows, and vehicles will occur. Tree damage is likely. * These dangerous storms will be near... Farmington and Yates City around 300 PM CST. Elmwood and Trivoli around 305 PM CST. Brimfield around 310 PM CST. Hanna City around 315 PM CST. Other locations impacted by this tornadic thunderstorm include Middle Grove, Smithville, Kickapoo, Norris and Monica. This includes Interstate 74 between mile markers 68 and 82.

At 201 PM CST, severe thunderstorms were located along a line extending from near Shale City to near Fandon, moving east at 55 mph.

Instructions
For your protection move to an interior room on the lowest floor of a building.

A Severe Thunderstorm Watch has been issued for Fulton County until 6:00 p.m.

FREE COVID TESTING in Lewistown and Canton.
You DON'T have to have symptoms or be sick.

Shout out to CantonILRocks for making this such a fun activity!

Per the Canton Police Department

Jennifer Wages has been found alive and well. Thank you to all the agencies and volunteers who helped bring this search to a positive outcome.

What do YOU want in your local radio station? Let us know by taking our quick survey! Share with your friends too 🙂

Thank you for taking a couple of minutes to fill out our survey to better serve you!

1941
Born on this day in Elkhart, Indiana was Connie Smith the country music artist. She began her career in 1963 after winning a local talent contest near Columbus, Ohio, which attracted the attention of country songwriter Bill Anderson. Her first #1 hit was with her debut single "Once A Day" released in 1964. Smith won Billboards Most Promising Female Country Artist in 1964.

1966
"Almost Persuaded" by David Houston was at #1 on the Country chart. The song spent nine weeks at #1 and has since gone on to become a country standard. For 46 years and two months, no #1 song matched the chart-topping longevity of "Almost Persuaded," until Taylor Swift's "We Are Never Ever Getting Back Together" notched its ninth week atop the Billboard Hot Country Songs chart the week of December 15, 2012.

1976
Waylon Jennings was at #1 on the US country album chart with Are You Ready for the Country. Its title track is a song from Neil Young's seminal 1972 album Harvest. Despite the title, this outlaw country album featured covers of rock songs, including "Can't You See" by the Marshall Tucker Band. MacArthur Park (Revisited)" and won Waylon his first Grammy Award in 1969.

1995
Garth Brooks' The Hits became the first best-of album by a country-based artist certified for shipments of 7 million units. In June 1995, the master copy of the album was buried under Garth's star on the Hollywood Walk of Fame.

2007
Carrie Underwood released "So Small" as the first single from her 2007 album Carnival Ride. It became her fourth #1 single. "So Small" debuted at #20 on the Billboard Hot Country Songs making the highest chart entry by a solo country female artist in 43 years of Nielsen BDS history.

Weather moving through Canton this afternoon.

A derecho (long-lived line of severe storms with very high winds) is racing across Iowa, and will enter Illinois soon. The storms are expected to reach Galesburg around 1:30 pm and the Peoria metro area between 2:15-2:30 pm. A significant history of wind damage has occurred across Iowa, and winds in excess of 80 mph are possible with this line of storms. Areas near and north of I-74 are most at risk from these storms. It will be important to take cover in a sturdy building as these storms approach.

Fulton County is included in this particularly dangerous situation watch.

The NWS Storm Prediction Center has issued a

* Effective this Monday morning and evening from 1125 AM until
700 PM CDT.

...THIS IS A PARTICULARLY DANGEROUS SITUATION...

8 am update: Upgraded severe outlook to Enhanced Risk for damaging winds in the northern half of central Illinois, and a level 2 slight risk threat in the remainder of Illinois. The timing of severe weather potential looks to be mainly between 3 pm and 9 pm, as a line of storms progresses from west to east. The primary hazard will be damaging wind gusts 60-70 mph. Isolated hail up to 1" will be possible along with an isolated brief tornado. There is also potential for heavy rain and flash flooding with the storms, especially on roads in low lying and poor drainage areas. Know where you would take shelter if severe storms occur.

Be the first to know and let us send you an email when CD Country 107.9 posts news and promotions. Your email address will not be used for any other purpose, and you can unsubscribe at any time.

Weather moving through Canton this afternoon.

The Funeral Procession of Fulton County Sheriff's Deputy Troy Chisum heading to Peoria as it is passing through Banner. 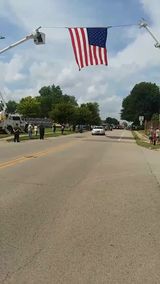 This the procession honoring Deputy Troy Chissum who was fatally wounded responding to yesterday battery and domestic situation in rural Avon as it passed through Canton on Illinois Route 78 near Spoon River Electric Co-op.

Press Conference in regard to incident in Avon on Tuesday afternoon that took the life of Fulton County Sheriff's Deputy Troy Chisum. Suspect was taken into custody this morning without incident.

Demolition of the Historic Opera House Building in Canton has started. Video footage is courtesy of MBixler Video Productions. 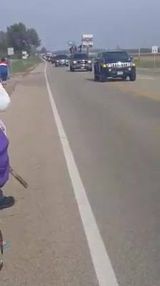 Other Radio Stations in Canton

What was the playlist on Thursday February 11th from 11:30am to 1:30pm?
https://play.google.com/store/apps/details?id=radiofmdialcom.aubw
http://www.radiofmdial.com/station/cd-country-107-9/
Ok I'm giving up on listen to this station... Dead air time every day!! Bye!
Cant get you to play on my smartphone. Technical issues with livestream???
https://youtu.be/rvrZJ5C_Nwg
The future of country music xD
What sports do you broadcast on WBYS 1560 and what do you do when there is more then one sports broadcast on WBYS 1560 . Can you please give me a list of the sports on WBYS 1560 ? Can you please give me the Schedule for WBYS 1560 for all 7 days a week? Can you please make a sports Schedule for the sports that play on WBYS 1560 radio and here are some examples.

Can you please tell me what National news you do at the top of every hour or every half hour pleas let me know. Because I wan to know. That would make it easier for my dad and me on our road trips. Please let me know when you decide. If you have to forward this on please do so.

Thanks,
Jason Grager
This station is awesome. Keep it up. I'm loving it
x

Other Radio Stations in Canton (show all)