This job isn’t your average 9-5. #themanfromtoronto

Amazon Prime Video has greenlit the docuseries the Untitled Twin Flames Universe Project, which will focus on the couple Jeff and Shaleia Ayan (pictured above), who have become self-styled “l…

If anyone else tells you that they’re The Man From Toronto, don’t believe them. #themanfromtoronto

Who is the real Man From Toronto? Find out in this action comedy starring Kevin Hart and Woody Harrelson only on Netflix June 24! #TheManFromToronto

Didn’t see it in theaters? Don’t worry. #VivaMaestro starring @gustavodudamel is on now on Amazon and Apple TV!

Leanne had quite the transformation this season 😈👼🏽#Servant

All is calm, all is normal… well, sort of. #Servant

‘Spider-Man: Across The Spider-Verse’ Heads To Summer 2023; Sony Dates ‘Madame Web’, ‘Equalizer 3’ Among Other Release Changes

Sony’s animated sequel to the Oscar winning movie Spider-Man: Into the Spider-verse, Spider-Man: Across the Spider-Verse is moving from Oct. 7 this year to June 2, 2023. The news is breaking …

EXCLUSIVE: On the heels of its success with Paramount’s Sonic the Hedgehog films, SEGA has another franchise coming to the big screen with beat ’em up game Streets of Rage getting the f…

Netflix has acquired worldwide rights to Sony Pictures’ action-comedy The Man from Toronto, starring Kevin Hart and Woody Harrelson, Deadline can confirm. The film previously scheduled for re…

From pure joy to hopeful optimism, these are the few emotions of Sean Turner. #Servant

The real question is: are you okay Leanne? #Servant

We can hardly conduct ourselves: ¡VIVA MAESTRO! is now playing in select theaters! 🎵

Director Ted Braun brings you this timely and uplifting new documentary about Gustavo Dudamel's life, career, and the power of music.

Thank you to partners @greenwichentertainmentand @participant. #VivaMaestro is now playing in select theaters in NY and LA.

It’s time to face the music. #VivaMaestro starring #GustavoDudamel is in theaters today!

What would you do if you saw a strange person walking down the steps with a 🔪 ?

On a scale of 😇 to 😈, how would you describe Leanne’s transformation this season? #Servant

@ishy_night, @mnight's daughter, says she grew up looking over her father’s shoulder on set. Now she’s directed four episodes of #Servant, including the finales of seasons 2 and 3.

Who are “they” and what did they do to Milo? #Servant

What do you think of Dorothy’s apology? #Servant

No matter what happened during the week, the cast of I Love Lucy was always funny by Friday. Experience what a week in production was like for one of the biggest television shows to ever exist in #BeingTheRicardos, now streaming on @primevideo!

Family is there for you no matter what. Find out what happens to the Turners on the #Servant Season 3 finale, streaming now on @appletvplus.

We're going to the Oscars! Congrats to our three acting nominees from Being the Ricardos. #oscars #BeingtheRicardos

The 94th Academy Awards are this weekend and we are putting our best foot forward. Who do you want to see win on Sunday? #BeingtheRicardos

Don’t miss the jaw dropping #Servant Season 3 finale. It’s all about mama. Episode 30 of 40 is streaming now on @appletvplus.

Although they just completed their visit to the “Lost City,” Adam and Aaron Nee are quickly gearing up for a trip to the planet Eternia. Following years of speculation about a “Ma…

Is the Turner home finally ready for peace? #Servant

Being a full-time mother while also plotting to get rid of your nanny has pushed Dorothy to her limit. Will she reach her breaking point? With only 2 episodes left, there’s little time left to find out. The latest episode of #Servant is streaming now on @appletvplus

Dorothy is criticizing Julian and Sean’s “enabling”, but where would she be if they hadn’t done the same for her? #Servant

Repost from @mnight (1/2) In this frame from episode 27/40 of @servantofficial the directors @celineheld_ & Logan use blocking and architecture to tell the story of a woman slowly losing her home to this seemingly otherworldly nanny who literally has the upper hand.

(2/2) In this image from episode 28/40 of @servantofficial the director @dylanholmeswilliams uses the TV perspective to show the family’s trauma at a frightening event. In this show we never really leave the home, so things seen through the TV or phones are extra powerful and sometimes shocking.

Be the first to know and let us send you an email when Escape Artists Entertainment posts news and promotions. Your email address will not be used for any other purpose, and you can unsubscribe at any time. 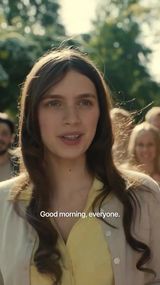 Founded in 2001, Escape Artists is an independently financed motion picture and television company with a first-look non-exclusive deal at Sony Pictures for film and an exclusive first-look with MGM Television for TV, headed by partners Todd Black, Jason Blumenthal, David Bloomfield and Steve Tisch.

https://m.youtube.com/watch?v=plpt0NNubHM&feature=youtu.be
https://youtu.be/iqnGENGhmZA
https://youtu.be/TaiTQ4JupQQ
My composing song
My composing song
My composing song
𝐅𝐚𝐧𝐬 𝐖𝐚𝐧𝐭 𝐃𝐞𝐛𝐫𝐚 𝐌𝐞𝐬𝐬𝐢𝐧𝐠 𝐚𝐬 𝐋𝐮𝐜𝐢𝐥𝐥𝐞 𝐁𝐚𝐥𝐥, 𝐀𝐠𝐚𝐢𝐧! “Being The Ricardos” is ready to take on a cast for the Amazon Studios / Escape Artists Entertainment production with numerous actors circling the industry, hoping to claim the title couple roles for Lucy and Ricky Ricardo. Read at the #link about Debra Messing’s name being thrown in the ballot for Lucy as Nicole Kidman’s name appears in the news, reportedly being considered for the role: bit.ly/2XGBlol. Credit: Rob Latour for Cate, Aurora Rose for Debra, Emma Summerton for Nic #fanrequest #debramessing #wewantdebraforlucy #lucyricardo #lucilleball #ilovelucy #welovelucy #beingthericardos #rickyricardo #desiarnaz #entertainmentindustry #ballotname #actress #awardwinner #writer #production #bts #role #featurefilm #yearsinthemaking
Check out the The New York Times for an inside look into MA RAINEY’S BLACK BOTTOM, coming to Netflix on Dec. 18! Featuring the talented work of MMA client and Choreographer Camille A. Brown, as well as August Wilson, Viola Davis, Chadwick Boseman, Escape Artists Entertainment, and more! https://www.nytimes.com/2020/09/30/movies/chadwick-boseman-ma-raineys-black-bottom.html
I am caring for a paraplegic in similar condition to actor Cranston role in the movie The upside. For the last 1.5years been trying to locate the vendor for the shower high tech equipment vendor that is shown in the movie as Kevin Hart shower stall.Can you contact the set designer for the movie and find out the vendor for the shower setup ? Thanks IN Advance, Paul L. Dallas, Texas, contact callcentertiger at gmail com
To watch a movie, people watch the trailer. They may be tempted to like it, but when they are still not sure, they rent it. Now you made a great movie and people agree with it and decide to buy it. Now the customer pays for the rental and the purchase. that is almost 150% of the price of the movie. Producers should not charge the customer 150% for liking a movie. A customer should maximum pay the full price of the movie not 150% of the price for reversing the order of purchase i.e. rental and then purchase. I believe that your revenue will increase if you give customers a rental price discount when they choose to buy within 30 days.
Thank you to Taylor, Tony, and Becky from Escape Artists Entertainment for meeting with us! We appreciated hearing your insights into the production side of motion pictures and television, and your advice on starting out in the industry. Escape Artists is located on the Sony lot and after the meeting we took a quick stroll down Main Street and found some cool picture spots.
THE DEVIL GOES DOWN, starring Michael Kenneth Williams makes its 92 Film Festival, 29 awards can counting. For one week only link with no password: https://vimeo.com/80412541 Six distribution deals. And the ON A FIELD OF LEGENDS feature script wins another award. Logline: Ex-superstar college quarterback challenges DEATH to a football game for his daughter's life using a dream team of legendary, old-time, passed on players and finds redemption along the way. Based on the novel. (Taps into the billion dollar college and NFL football market)