DSI connects communities, families, and organizations though television over the internet. The DSI network and tools enables you to broadcast live or video on demand, where your audience views your content, whenever convenient to them.

Musictribes.net the conduit for the conciousness separate from the insidious intrusion of social media campaigns

Tap into the music

We offer a real time interaction, accountability, transparency and creative solutions improving economic opportunity, through in country relationships accessed through permission based social media campaigns on our customised OTT/IPTV

The realization that despite musicians being the foundation of the industry they are often cut out of the revenue equation. As in films, streaming platforms have become the norm in the music business. And is the largest segment of the music industry income stream.

Yet innovation was the least popular response to disruption, especially in the music industry. Instead stagnation is the path of least resistance. There are some though, not industries like MusicTribes take action.

Online platforms offer audience access and convenience coupled with cheaper prices; it's undoubtedly transformed the structure of the industry's revenue system and the way in which artists make ends meet.

Media consumption across the globe is increasingly happening. The increase in the number of devices capable of supporting online media along with increasing internet access speed has provided consumers with an option to access the media entertainment or social activity anytime, anywhere.

Internet is the decisive technology of the Information Age, the vector of transformation. The network provides multimodal and interactive communication that transcends time and space for fans. So MusicTribes is stepping in to address this inequality and showcase talent from where it is.

we began live streaming using microwave in 1994. We morphed over time and trials to launch Dsilive. Net in 2008 as OTT/IPTV . We augmented our global fiber pier to pier broadcast with download of mobile APP for live from where you over cell phones. We are a URL agnostic global broadcast network.

Dsilive. We are the Joint Venture partner platform for educating, resource management and direct to consumer supply chain on seven projects International Projects

DSI is now offering your own personal TV channel. Go to our website at www.dsilive.net and click on "START A LIVE STREAM" to begin your broadcast.

The Arnold Fitness EXPO, in the main hall of the Greater Columbus Convention Center, is the nation’s largest health and fitness exposition. It annually showcases leading businesses and organizations showcasing the latest trends in the industry.

“The Fitness EXPO is among the must-see attractions at the Arnold Sports Festival for many of the Weekend’s 170,000 attendeesl. “We have attracted all of the top industry companies that will all put together elaborate displays that will once again draw jam-packed crowds to the Greater Columbus Convention Center.”

Our next film festival is:

The Green Lifestyle Film Festival is a 501 (c) 3 non profit , grassroots organization whose intention is to create a new vision for films.

By organizing a weekend film festival annually in March, we invite filmmakers, sponsors, donors, press/media and the public who wish to join with our mission to change the modern day pervasive media messages based on fear and violence in films to films that address the reasons behind such distorted images of mankind and our role here, with films that challenge us and inspire us to live lives of inspiration and to become the magnificent beings that lie within each of us.

This festival is a celebration of film makers who dedicate their talents, income and energy to examining what sustainability really means:

from how we birth our young, to how we raise children, the construction and design of homes in which we live, to how we deal with illness, how we move about the earth in our physical bodies, and how all this is reflected in how we feed ourselves, to how we treat others in the animal kingdom all in the name of “the perfect steak” the “fashionable coat or accessories” or for entertainment, and its impact on all spheres of life on Planet Earth.

The Green Lifestyle Film Festival was created to address a concern by the film festival’s founder( Dorit), that medical costs, lack of proper preventive, medical care, allegiance to a failing disease management system, an increasingly industrialized food system and non-distribution of very critical information have become a hindrance to achieving what is our most basic birthright- radiant, robust, vital health and free flow of information pertaining to the sanctity of life and the nourishment of the human spirit. This is all reflected in the fear based, violence ridden films that are box office draws, and a media based culture that projects and perpetuates these very themes.

So much “green washing” is also taking place, all in the name of rampant consumerism, that fiction and fantasy need to be replaced by integrity and adherence to a compassionate, all encompassing new economy backed by meaningful actions.

The films selected for the Green Lifestyle Film Festival seek to fill that gap. Wisdom and reverence for the Laws of Nature are being presented as options for ignorance and fear based decisions.

The next Green Lifestyle Film Festival ( GLFF), which is an international, non profit event , will be held at UCLA’s James Bridges Theatre in Los Angeles, California, USA from Friday 19th to Sunday 21st March 2010.

On Friday, 19th March 2010, we begin with a Press Conference ( by invitation only) at 3pm, and then we open to the public at 5pm with a Green Carpet followed by a reception featuring top living foods gourmet green chefs, then into the theatre with Q&A with the film makers after watching trailers of their films.

Live music, live food demos, entertainers on the outdoors stage, lots of prizes and dancing, booths to inspire creative and evolutionary choices, abound in the Free Outdoors Arena all weekend long as the films are being shown in the theatre . This all culminates with a Gala Awards Dinner & Ceremony on Sunday night , the 21st March, in Hollywood.

The 2010 Green Lifestyle Film Festival will be held at UCLA’s James Bridges Theatre from Friday 19th March at 5pm to Sunday 21st of March 2010.

The Green Lifestyle Film Festival (GLFF) is a 501 (c) 3 non-profit organization financed entirely by community support from individuals such as yourself through donations ( from $5 up) to grants and sponsorships from individuals and organizations whose core values resonate with ours.

We thank you and look forward to serving you at the 2010 Green Lifestyle Film Festival with films, music, food and information about sustainable life choices that will continue to inspire you long after the film festival culminates with the Gala Awards Dinner and Ceremony on the 21st of March 2010. 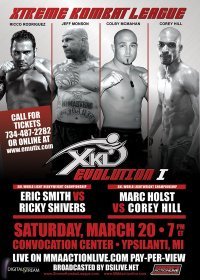 Xtreme Kombat League (XKL) explodes into Michigan to hold the State’s biggest Pro MMA event since the approved legislation of Pro MMA competitions. XKL has been heavily at work setting the ground work for an amazing event. The event that has been title ,”EVOLUTION 1”, takes place at the EMU Convocation Center in Ypsilanti, Michigan on March 20th, 2010, starting at 7pm.
“The state of Michigan is a region deep rooted in the spirit of sport! MMA is regarded as the fastest growing sport in the world. With the demand for Pro MMA events at such a high level in the state, it only made sense for us, the XKL, to break into Michigan and put on its biggest Pro MMA event! Our team has created a fight card that will entertain all MMA fans that will be in attendance or watching LIVE Pay Per View on www.MMAactionlive.com”, stated president Eric Rafiq. This event will set the stage for many national and international events to follow this show.
“The key to any great show is to tap into the enormous amount of talent that circles the industry, attaining fighters that have earned their place in this sport as true Pros. XKL is aimed to retrigger experienced fighters and search out the newest and hottest rising fighters”, said Mr. Rafiq as he looked at the up and coming Fight Card. The Fight Card has been created to give MMA fans some great diverse skill match ups. XKL has acquired some of the industry’s best talent from the best leagues in the world and some hidden talents that will be bursting on to the MMA scene.
Few of these renown MMA Pros are Ricco Rodriquez, Jeff Monson, Corey Hill, Ricky Shivers, Eric Smith, and more. With this much talent in one arena at the same time, the XKL is sure to put on a great show for all that tune in. This is a very intriguing fight card for all MMA enthusiasts.
The event,’EVOLUTION 1”, which is set for March 20th, will be streaming live on 4 separate cameras, via internet. The XKL is moving forward with state of the art live High Definition streaming global broadcasting by joining forces with MMAactionlive.com Pay Per View and DSIlive.net. This technology now makes it possible to broadcast all XKL MMA events to an astounding 300 million homes in High Definition. MMAactionlive.com and DSIlive.net flex their innovative muscle by giving the viewer the ability to switch between 4 cameras positioned strategically throughout the arena. Not only showing the fight but giving the viewer the inside scoop on what happens in the locker room prior to the fight. With the purchase of the Pay Per View ticket directly on the www.MMAactionlive.com website, all viewers receive a bonus viewing of the Weigh Ins held on Friday, March 19th.
The tickets for this event are on sale now! Tickets can be purchased online at www.EMUTIX.com and via telephone at 734 487 2282 734 487 2282. Viewing the arena and ticket pricing, pricing and seat location is fantastic. Starting at $12 and limited floor seats for $32, all VIP Ringside tables priced at a very affordable $500 (Limited number remaining) are available for booking by contacting 226.339.8070.

Pioneering visual communication. Connecting communities at the speed of light. The founder of Digital Stream envisioned a global communication network visually interconnecting communities around the world. Today, this is a reality. DSI is now connecting communities, families, and organizations though television over the internet. Whether its entertainment, nutrition and health, sports, or business communication; The DSI network and tools enables you to broadcast live or video on demand, where your audience has the luxury to view your content, whenever convenient to them. DSI pioneered a proprietary software driven model that is hardware agnostic and operates over a shared robust network with over 50 major US corporations, to reduce cost. DSI has global reach with local, in-country, presence. Enjoy the choice for privacy of content broadcasting and owning your confidential audience data while distributing product and services on an unprecedented global scale. DSI also offers several income opportunities and DSI new media tools to monetize it while engaging the power of social networking and widgets (ad insertion, window within a window) over our proprietary DSI LIVE network. Own your TV channel and studio to go NOW! Simply download the DSI encoder to your laptop computer, plug in your camera and once provisioned by DSI, start your live broadcast. To summarize, DSI offers; • Affordable HD quality internet television to the world. • Your Own broadcast channel for communication and entertainment. • Visual communication at less than the cost of an average mobile phone call. • Tools to monetize and widgets to promote products with in-country support services. The DSI team thanks you for your valuable time. Come join us for the future of affordable live broadcasting and TV media distribution over the Internet. Digital Stream, Your Studio and Personal TV Channel on the go

Be the first to know and let us send you an email when DSILIVE Global Broadcast Network posts news and promotions. Your email address will not be used for any other purpose, and you can unsubscribe at any time.

Musictribes.net is highway to the commuinity door

Enabling rural communities to use tools and produce shows on their culture, there lifestyle, their music broadcast to global audience