Aviation reporter at the Dallas Morning News covering American Airlines, Southwest Airlines and the Restaurant and Retail Reporter for the Orlando Sentinel

Southwest Airlines will be allowed to expand to DFW Airport in 2025 without giving up coveted space at its home base at Dallas Love Field.

Some key figures think Southwest Airlines could soon be invading the home turf and fortress hub of American Airlines.

Here's how we got here and what's at stake.

Starting in 2025, Southwest Airlines can expand to any airport in the region without giving up coveted space at capacity-restricted Dallas Love Field — an...

Do you think inflation is tough? Try vacation inflation

Do you think regular inflation is tough? Try vacation inflation.

Every part of summer vacations are more expensive this year from airfare (48%) and hotels (46%) to parking and dining out.

Waiting to buy spring and summer airfare? Might not want to wait much longer. Prices are going up -- fast.

The COVID-19 era of cheap flights is swiftly coming to an end and travel firms are seeing signs that airfares will likely reach 2019 pre-pandemic levels as...

What would tell Dallas business leaders days before he takes over as CEO?

Bob Jordan has less than a week before he moves into the CEO chair and Southwest Airlines, and part of that duty was facing the Dallas business community...

DFW International Airport has always ranked high in delays among major airports, but during the pandemic it has been the worst in the country.

The nation’s airports have seen fewer delayed arrivals since COVID-19 shocked the air travel industry and forced a reduction in flight numbers, but DFW...

Touchdowns for the New York Jets are so few and far between this year that even airports in Texas are celebrating them. 🎉

Southwest Airlines is introducing a new fare type. Here’s what we know so far.

A new fare type is coming to Southwest Airlines to join the Wanna Get Away, Anytime and Business Select ticket types.

Coming out of the pandemic, Dallas-based Southwest Airlines is getting ready to shake up the air travel business with a new category of tickets, expanding...

Only 1 cancellation for Southwest Airlines on Sunday. Fewer than 1% of flights canceled for American Airlines on the busiest day since the COVID-19 pandemic began.

How the two struggling airlines put it together for the Thanksgiving travel week.

American Airlines has more than doubled its flights in and out of Austin-Bergstrom International Airport. Is it enough to dethrone Southwest as the dominant carrier in and out of Texas' capital?

No airport of its size in the country has bounced back from the COVID-19 pandemic the way Austin-Bergstrom International Airport has, buoyed by a growing...

“I’m anxious about the flight,” said Dallas' Greg Malcolm, who is traveling to New York for the Macy's Thanksgiving Day Parade. “This is my childhood dream. I didn’t want to let anything get in the way.”


DFW International Airport could see as many as 260,000 passengers on the day before Thanksgiving, the peak flying day in what promises to be a busy holiday...

Vaccine requirements may be causing a stir among employees at American Airlines, but it isn't hurting efforts to recruit new workers, said CEO Doug Parker Wednesday

Politicians such as Sen. Ted Cruz, Sen. Ron Johnson and Donald Trump, Jr. have been pushing the idea that pilots protesting vaccine mandates led to 1000s of cancellations and delays for
Southwest Airlines.

Both the airline and the Southwest Airlines Pilots Association say that's untrue.


Southwest Airlines and the union representing its pilots say that crew members did not call out of work sick to protest vaccine mandates, leading to...

American Airlines told employees they have until Nov. 24 to submit proof of vaccination or be fired.

Hundreds rallied outside American headquarters in Fort Worth to protest the move.

Best of all, it's free

DFW Airport is experimenting with a “fast pass” for TSA security lines at one of its TSA security checkpoints. The trial run allows passengers to make an...

Which one is more painful, a body check from an NHL hockey player or a whack from a flight attendant?

A former NHL hockey player has filed a suit against American Airlines claiming that he “was the victim of an unprovoked battery” by a flight attendant...

Air travel threats united passengers after 9/11, but COVID-19 has spurred division on planes

The 2001 terrorist attacks and the COVID-19 pandemic shocked the airline industry, resulted in thousands of lost jobs and scared people away from traveling.

But American's rallied around solutions 20 years ago while today air travel divides.


Two decades after airplanes were used as weapons to incite terror, the COVID-19 pandemic has pitted passenger against passenger on planes and once again...

Want to know if any big changes will be coming to Southwest Airlines under incoming CEO Robert Jordan? Here's what he's said so far.

Southwest Airlines is less than six months transitioning to just the sixth CEO in company history and so far the long-time company insider Robert Jordan...

Another day, more travel delays. It seems the next domino is pilot and flight attendant staffing issues.

More than three-quarters of American’s flight cancellations Tuesday came from problems with crew availability, according to an internal company document...

American Airlines is buying a stake in JetSmart out of Chile. JetSmart's owner is Indigo Partners, which also owns Frontier Airlines.

In a bid to rejuvenate its connections in South America, Fort Worth-based American Airlines is buying a minority stake and forging a partnership with low-cos...

American Airlines warns of fuel shortages at airports across the country

The latest shortage in this pandemic recovery is airline fuel

Some smaller airports across the country are running out of fuel for commercial jets, and now American Airlines is warning pilots to prepare for the...

Southwest Airlines flight attendants say they have had to “bear the brunt” of several weeks of weather cancellations, tech difficulties and weather delays...

Southwest Airlines is raising its minimum wage to $15 an hour by Aug. 1

Dallas-based Southwest Airlines will raise its minimum wage for all workers in August to at least $15 an hour, giving a boost in pay to about 7,000 workers.

Southwest Airlines CEO plans to retire in early 2022 and make way for Robert Jordan, the company's corporate services chief. Kelly has run the company since 2004 and grown it into the country's largest domestic carrier.

Gary Kelly will pass the baton to another longtime Southwest Airlines executive. Robert Jordan, next year. Southwest said Wednesday that Kelly, 66, will...

Dallas-based Southwest Airlines marks its 50th anniversary as an operating airline Friday. That fledgling airline, famously born from a sketch on a...

Is the Terminal D expansion at DFW International Airport the future of air travel?

DFW International Airport is putting the finishing touches on a four-gate extension to the D Terminal after officially opening the area to passengers in...

Dallas-based Southwest Airlines is dealing with another technical problem that has sidelined its entire operation, following a similar issue Monday that...

American Airlines is flying a lot more flights with more seats than any of its rivals. The post-pandemic race for airlines is on.

Fort Worth-based American Airlines has taken the pandemic as an opportunity to re-emerge as the world’s largest airline, a title it has it traded back and...

Just a week after Senate Majority Leader Chuck Schumer revealed that he was putting pressure on Southwest Airlines to fly to Syracuse in his home state of...

Southwest Airlines is doubling (or even tripling) down on the 737 Max with orders for 34 more of the smaller 7 series variant aircraft.

Buying alcohol won't be an option for most American Airlines passengers this summer after the recent uptick in bad travel behavior.

American Airlines will delay selling alcoholic beverages this summer to main cabin due to the uptick in bad passenger behavior in recent months that...

Southwest Airlines could be on the verge of a major expansion.

Southwest Airlines has room to expand its fleet by nearly 500 new airplanes after adding more than a dozen new destinations during the COVID-19 pandemic,...

DFW International Airport is on pace for a record number of arrests for “interference with a flight crew,” part of a nationwide trend in unruly passengers...

Never gets old seeing one of your articles on A1 https://www.dallasnews.com/business/airlines/2021/05/24/the-summer-travel-surge-at-airports-may-make-you-think-its-2019-again-just-with-masks/

Flight attendants are asking Southwest Airlines for help in putting an end to the growing trend of passenger misconduct
https://www.dallasnews.com/business/airlines/2021/05/25/southwest-airlines-flight-attendant-bloodied-loses-teeth-in-assault-by-rowdy-passenger/

The Southwest Airlines flight attendant lost two teeth and walked away bloodied after a confrontation with a passenger Sunday morning, part of a disturbing...

here's some pork in that Transportation stimulus bill for
DFW Airport
including money for a power plant, a flyover bridge and snow removal equipment.

Earmarks are back. The congressional practice of members essentially hand-picking projects was banned from Congress in the early 2000s after it became...

Be the first to know and let us send you an email when Kyle Arnold, Dallas Morning News posts news and promotions. Your email address will not be used for any other purpose, and you can unsubscribe at any time.

The new Old Jailhouse in Sanford

Fireworks are illegal, so how can I still buy them? 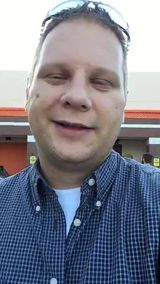 Other Newspapers in Dallas

Other Newspapers in Dallas (show all)