The continuing legacy my grandfather started over 90 years ago. Silver Crown, Sprint Car and Limited

Greg Weld in the South Dallas Battery sprinter. This photo was taken at Gregs shop "Weld Wheels" in 1999. Greg drove this car in IMCA events in 1964 for my Grandfather, winning several races. 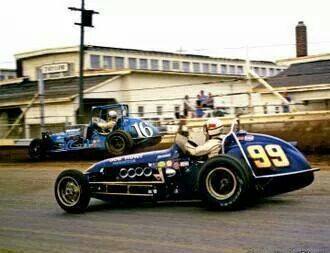 Gary Bettenhausen in the #16, and brother Merle battle during the 1971 Hoosier Hundred at the Indiana State Fairgrounds. On Thursday, May 24th, at 2pm, IRMA will unveil a marker honoring the many iconic events that have taken place there. From Barney Oldfield becoming the first driver to hit 60mph in 1902, to the Hoosier Hundred, the Hulman Hundred, flat track motorcycles, stock cars and the famed Golden Glory Sweepstakes for African American drivers, the Hoosier mile has been the place to race.
The address is 1202 E 38th St, Indianapolis, IN 46205. The Hoosier Hundred will be running that evening. Come for both great events.

IRMA would like to thank Tony Hulman George, and Mike Smith of the Hulman Memorial Way Foundation for making this marker possible.

Austin Mundie of Dallas makes his USAC Silver Crown debut at the "Sumar Classic" this Sunday, April 29 at the Terre Haute Action Track!

Austin Mundie making laps in preparation for Terre Haute. This will be Austin's first ride in a USAC Silver Crown car. Looking forward to April 29th. 44th Annual Winter Nationals - Lanny Edwards Memorial is next weekend! Join us October 20th & 21st as we close out the 2017 racing season!

My driver when he was just a baby.

Received the sad news earlier that my good friend, Bill Hill, passed away this afternoon in Little Rock, AR. Bill and I have been friends for nearly 50 years. We lived and traveled together over the years and shared some of the best of times. Bill was a successful salesman prior to his involvement in auto racing and so he adapted very well to auto racing promotion which he learned from some of the best in the business including J.C. Agajanian, Don Besile and Don Smith. After many years in auto racing promotion, Bill also worked in the Auto Racing Insurance business, Risk Management and also helped run several different racing venues. Along the way he acquired a legion of friends. He is survived by his wife Ruby, a step son, two daughters and grandchildren all of which he was extremely proud. Many who knew Bill Hill may not have known he was a former Paratrooper and one of the brave souls who, in -30 degree weather, parachuted into a hell hole known as the "The Chosin Reservoir" during the Korean War helping to free our Troops there who had been led into a trap by the North Koreans. A brave soul and a true and loyal friend!
With Ruby's help, Bill finally overcame his demons and developed a relationship with his Lord & Savior that continued throughout the remainder of his life. He shared some of the stories surrounding his Prison Ministry which he finally gave up due to his age. It is a very dangerous place to visit according to his own admission. And I can assure you Bill did not scare easily. And now, thankfully, he is receiving his eternal reward in heaven.
My heartfelt condolences to his wife Ruby, her son, his daughters, grandchildren and other relatives. Rest in peace my friend! He won the inaugural California 500, finished second, third and fourth in the USAC national championship and qualified for 15 Indianapolis 500s but Jim McElr...

He was inducted into three motorsports halls of fame and was the 1962 Indianapolis 500 Rookie of the Year.

Wally and Walter did a fine job getting our cars ready for the 2017 season.

For any of you that wish to run in Oklahoma--- Might want to check this out.

Be the first to know and let us send you an email when Les Butler Racing posts news and promotions. Your email address will not be used for any other purpose, and you can unsubscribe at any time.

Other Publishers in Dallas

Other Publishers in Dallas (show all)