KOA is Colorado's only station for the Denver Broncos. Streaming games to your desktop or laptop.

New Broncos LB Randy Gregory is ready for a new start with his new team. But he hopes to be up to his old tricks of putting pressure on the quarterback and making plays. Check out his full comments at the link.

We have someone special we'd like you to meet, #BroncosCountry. 😉

Broncos Agree to New Deal with Inside Linebacker Josey Jewell | KOA 850 AM & 94.1 FM

Broncos Agree to New Deal with Inside Linebacker Josey Jewell | KOA 850 AM & 94.1 FM

Broncos Pass Rusher opts to come to Denver, rather than stay in Dallas

Retirement didn't last long. Tom Brady will be back for his 23rd NFL season. He'll return to the Tampa Bay Buccaneers next season. Details are at the link.

He will be back with the Bucs for another season.

The Voice of the Broncos Dave Logan on the Russell Wilson Trade | KOA 850 AM & 94.1 FM | Colorado's Morning News

The Voice of the Broncos Dave Logan on the Russell Wilson Trade | KOA 850 AM & 94.1 FM | Colorado's Morning News

The Denver Broncos agree to trade for Seahawks quarterback Russell Wilson. A package of draft picks and players are headed to Seattle. KOA Broncos Insider Benjamin Allbright has the details of the deal.

Denver will send picks and players to Seattle.

The Broncos have agreed to trade for Seahawks quarterback Russell Wilson. Details are at the link.

Denver will send picks and players to Seattle.

Quarterback Aaron Rodgers is staying with the Green Bay Packers. The Denver Broncos will have to look elsewhere to upgrade the quarterback position. Details are at the link.

The Broncos hoped they could try to bring the veteran QB to Denver.

Flores has filed suit against the NFL and three teams for racial discrimination in hiring.

Be the first to know and let us send you an email when KOA Broncos Radio Network posts news and promotions. Your email address will not be used for any other purpose, and you can unsubscribe at any time.

A 360 degree peak around radio row in San Francisco #SB50

The team arriving to cheering #Broncos fans at the hotel!

Miles the mascot just zip-lined into the stadium! GO BRONCOS!

The Broncos have arrived in the Oakland area...

Eddie Mac in the booth after being recognized on the jumbo-tron during the game!

The Broncos get practice started with the traditional breakdown on Sunday, September 1 at Dove Valley. Video by Mike Rice/850 KOA

Manning talks about his physical progress. 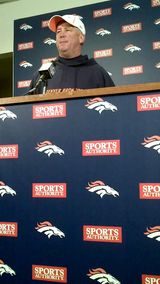 John Fox talks about the first day of rookie camp.

John Elway explains the Broncos' decision to trade out of the first round. 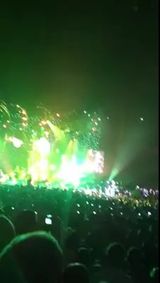 Tim Tebow sings "I'm Still a Guy" with Brad Paisley at the Pepsi Center! The crowd went NUTS when he came out on stage!!

Pregame show will be My Chemical Romance. This is video from their sound check at Wembley Stadium!

Other Radio Stations in Denver

Still refusing in-person practice?
Can't get the live broadcast of today's game. The link goes to a continuous loop that doesn't go live.😟
Hey guys, you keep announcing the wrong score for the Chiefs Broncos game... it’s 0-6. Stop giving the Chiefs an extra point!!!
Please bring back Dave and Rick at 4pm! Your show has gone way downhill since they went to mornings. Big mouth Big Al isn’t cutting it.
My son made a homemade radio receiver and picked up your station. Our house of 6 kids all listened to the Broncos game through his receiver on your station.
All the do is plug commercials on the post game Broco react show with Mike Rice
Never thought I'd get to see the Three Stooges Live and in color ... But here they are - with Shemp, Larry and Moe replaced with John, Vance and Paxton.Think I'll go trim my toenails.
I quit watching NFL,but the radio was on.More than once I heard "Osweiler hit the receiver in the hands...." Incomplete. Considering all possibilities,my hunch is political sandbagging for a job opportunity for a certain washout unemployed QB. I can't believe they are actually that bad.
Not watching the Broncos today because nothing has really changed and I'm still pi**ed off. To announce that, "Hey we are going to stand this week" just tells me that you know you acted stupidly. Kaepernick started it, but he doesn't have the copyright on kneeling. Players kneel for everything now including what the president says. President Trump called the kneelers SOB's so when the Broncos kneeled they put themselves into that category. The players and the management of the NFL are being played by the liberal media and politicians. It's not about injustice, it's about an agenda that started with the Obama regime and the players are caught up in the narrative perpetrated the hatred of the left.
Here is some blow back from the NFL players revolt. I will no longer listen to any 850KOA radio, the Bronco Network. If the NFL players are the voice of the down trodden then why do they not use their riches in Chicago, Cleveland or Philadelphia? Because it is not about the poor black communities voice. It is about progressive liberals tearing down white man's institutions. Since money talks, I am going to walk. I will no longer patronize any institution or corporation that supports the Denver Broncos or the NFL.
I am extremely disappointed in those Broncos players, as well as the Broncos leaders and Broncos organization, as well as the NFL, in allowing or in the actual refusal to stand for the National Anthem and refusal to salute the flag of the United States of America. Saluting the flag is about respect, honor, and pride. It is bigger than any individual, matters more than words, and stands for the freedoms and rights that these players claim they believe in. The saying is that actions speak louder than words--they can't have it both ways. If they don't respect the rights this country gives them, they (and all of us) will lose those rights. They have options: protest and kneel after the Anthem, protest at halftime, protest at the end of the game. A bit of advice: use your head for something more than a helmet rack! Respectfully yours, Wendy P.S.: I am the daughter of an 89 year old ex-VFW Commander who was a Korean War veteran (and I'm a niece of many), a cousin of a Vietnam veteran, an aunt of a an Iraq War veteran, and a neighbor to many who currently have sons serving in the Marine Corp and Rangers. I thank them for their service and their fight to protect our country.
A native and bleed orange. KOA should be where to go when you listen to the game in your car. Darn, Rick is so bad. Dave has always given good info. Is the color man supposed to have a semblance if the game or even the Broncos? All Rick says "what you said Dave." "Like you said Dave." Colorman, what are the routes? Post, skinny post. What are the coverage? KOA coverage C-