The last confirmed sighting of Olschewske was at her residence on 08/19/14 at 10:30 pm (Tuesday night). Mayci attends North Paulding Middle School and lives at 75 Amber Trace Dallas, GA 30132 (Burnt Hickory Estates Subdivision). There was a possible sighting of a female matching her description this morning on Benson Road in the area of Benson Lake Road at approximately 8:30am (Wednesday 08/20/14) but that has not been confirmed.

We do know that Olschewske has a history of depression and that concerns us since she has been gone for so long. If anyone see’s Mayci Olschewske please call 911. If anyone has any information on her whereabouts please call the Paulding County Sheriff’s at (770) 443-3010.

The empty big-box store at the corner of Highways 278 and 92 in Hiram is returning to life, and arts and crafts enthusiasts will be the targeted shoppers.

This is a great piece if you want to catch up with the whole airport timeline!

Read all about the Paulding Airport saga here! More updates to come today and the rest of the week!

In the latest round of legal maneuverings surrounding Paulding County’s airport, opponents of the proposed commercialization of Silver Comet Field are alleging the Paulding County Airport Authority has violated Georgia’s open meetings laws.

Audrey Aldridge was last seen at home just before bed (by her mother) on 02/24/14. When her mother went to get her up for school on the morning of 02/25/14, she was not in the residence. Detectives have spoken with school officials, friends, relatives, and anyone that knows her and have been not been able to locate her. The Sheriff’s Office is hoping that by utilizing the power of the media, we can locate this young lady.

As of now, Detectives do not think there is any type of foul play and do not have any reason to believe that she in danger. Please pass this information on to your viewers, readers, and listeners. I have also attached a photograph of Audrey for you to distribute as well. Audrey attends Paulding County High School.

If you have any information on Audrey’s whereabouts, please call the Paulding County Sheriff’s Office Juvenile Investigations Division at (770) 443-3010. 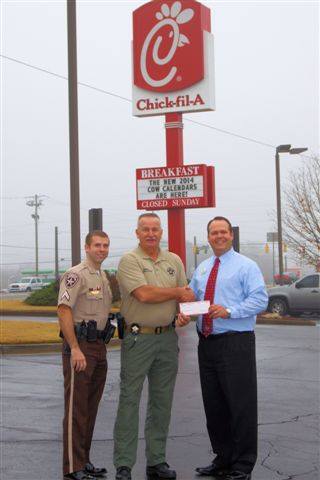 Kurt Davis, owner of Chick-fil-A in Hiram and Dallas, presents a check to Sheriff Gary Gulledge and Corporal Ashley Henson for the Cops for Kids shopping program. 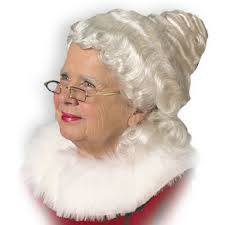 A woman who goes by Mrs. Claus, is asking for you to drop off your new and also clean, like new toys, christmas candy, wrapping paper, tissue paper, like new coats and sweaters to American Mini Storage at 5745 Wendy Bagwell Pkwy. Hiram. The toys will be distributed on Christmas Eve to 150 needy children. These children are not registered with any other charity.

Five Below in Hiram is collecting toy donations purchased in store.

Mrs. Claus is selling her personal belongings at the Corner Junque and Antique Mall in downtown Dallas. Ask for Sharon in the basement as say Mrs. Claus sent you. The items that are hers have the heart shaped tags on them. 100% of the sale goes to buy toys for these 150 needy children for Christmas.

If you have items that you would like to donate to the sale, please contact Mrs. Claus at 770-222-2688 between 1pm and 5pm and she can arrange to meet you or pick up your items from your home.

Just think of all the local children that will truly feel loved this season.

Melissa Roberts, Sales Manager, Douglas County Sentinel, gets a once in a lifetime experience at the 2013 Salute America Air Show

RUNNERS, RUNNERS, RUNNERS.... So here is the deal, we need more runners. Register for the 5k, or fun run and us the discount code "5k" and get half off between now and Wednesday at noon. Please help us save Sun Valley from looking like this! 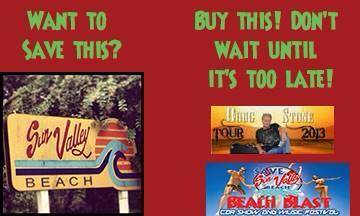 From 6pm to 9pm tonight go to www.sunvalleyconcerts.com and use the coupon code "Doug" to get half price general admission tickets to the concert. $15

We are now officially looking for Volunteers for the Save Sun Valley Beach Blast. Everyone who has told us how much they want to help we want to ask that you please tell us if you're interested by commenting on this post and we will contact you with further information.

Thanks again for all your support!

To those planning a wedding, come see the best that West Georgia has to offer! The Douglas County Sentinel is hosting a bridal show on September 29th at The Centre at Arbor Connection in Douglasville. Call 770-942-6571 for more information or if you are interested in being a vendor

Join Brian in an experience that is a collective effort to progress an artists' idea & drive it to completion via fan contributions. 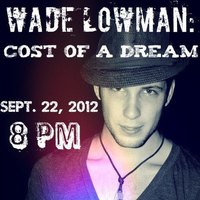 Cost Of A Dream

Cost Of A Dream

Wade Lowman, is days from fulfilling his life long dream.The American Musical & Dramatic Academy in New York City want to train him but that comes with a price!

Family members believe that Childers may have intentions of su***de. Childers has no money, no cell phone, and is not from this area and has no vehicle. Deputies and DNR Rangers have been searching nearby wooded areas, but have not been able to locate Childers.

If anyone has any information on Childers’ whereabouts, please contact the Criminal Investigations Division of the Paulding County Sheriff’s Office at (770) 443-3015.

Detectives do not have any other information and want to encourage anyone that may have seen him to come forward.

Times-Georgian recognized for innovation - The Times-Georgian is featured in the March 2012 issue of Editor & Publisher magazine as one of the 10 most innovative newspapers in the industry. The special cover story report titled “10 Newspapers W...

Local Auto Dealership joins forces with Paulding Sheriff’s Department
With the number of crimes against children on the rise, North Atlanta Auto Superstore co-owner Howell Thomason wants his dealership to do their part to help keep our children safe. In partnering with the Paulding County Sheriff’s Department, North Atlanta Auto Superstore will be conducting a free fingerprinting and photo I.D. session for all children in the surrounding area. The free I.D. will also include a dental chart. Thomason says this will be just another way the dealership can be involved in the community. This fun filled day of safety awareness will feature free car seat checks for proper installation, free food, live DJ, Karaoke and music performed by local artists. This event will take place from 10am-2pm on Saturday, March 24, 2012 at North Atlanta Auto Superstore, 3929 Jimmy Lee Smith Parkway, Hiram, Ga. 30141.

Elderly Hearing Impaired Male with Alzheimer’s Missing from Paulding County
(Paulding County, GA) The Paulding County Sheriff’s Office is seeking the public’s
assistance in the location of an elderly hearing impaired male with Alzheimer’s that is missing from Paulding County. Allen Lamar Boles left his home on Hollyberry Drive in Paulding County on 03/07/12 between the hours of 8:00 am and 9:00 am to take a walk (which is not out of the ordinary for him). Boles was later seen walking northbound on GA 61 in the area of Paulding County High School around 11:00 am on 03/07/12. Boles’ wife did not call 911 to report him missing until 11:23 pm on 03/07/12. At that point, Deputies began canvassing the area and put a BOLO (Be On the Look Out) out to the surrounding counties. The BOLO was put out at 1:18 am on 03/08/12. A short time later, officer’s with the Douglasville Police Department contacted the Paulding County Sheriff’s Office and confirmed that they picked up Boles on Interstate 20 in the area of Fairburn Road at approximately 10:30 pm on 03/07/12. After a routine check of his driver’s license, it was determined that Boles did not have any warrants and was not listed as a missing person. According to Douglasville PD, Boles seemed to be in good
health and did not appear to be in distress. Douglasville PD later explained that they
dropped Boles off at the Marathon Gas Station on Lee Road close to Interstate 20.
Douglasville PD stated that Boles was last seen walking northbound on Lee Road. .
Boles is believed to be in the early stages of Alzheimer’s and is also hearing impaired. According to Boles’ wife, he has never spent the night away from home. If anyone has any information regarding his whereabouts or has seen Boles, please contact the Criminal Investigations Division of the Paulding County Sheriff’s Office at (770) 443-3015.

Paulding County Detectives are working closely with Agents from the Georgia Bureau of Investigation (GBI) to try and locate Boles. The GBI has also issued a Mattie’s Call.

This coming Saturday, March 10th, the Paulding County Commissioners have asked us to coordinate a workday to continue to help residents of West Paulding. Working alongside our Commissioners office we are coordinating containers be put around the community in a dozen 'hotspots'. Volunteer groups are asked to check in at Poole Elementary beginning at 8:30 am so that we can evenly distribute volunteer groups who come out.

The work will be centered around debris clean up in the 9 mile stretch that the Supercel storm of March 2nd impacted. Volunteers participating in debris clean up will need to bring wheelbarrows, shovels, rakes, gloves, chainsaws and other items appropriate for removing trees, tree limbs, and trash.

Work is continuing all week long. If someone is looking for specific areas to go serve they can call 678-792-4488. This line has received dozens and dozens of calls from around the Southeast since Saturday including calls from residents who were impacted. They receive priority. Please be patient in waiting for calls back.

We are not just a printing company. It is our belief that a single source provider is the best way to keep your brand image consistent. Whether you need business cards, promotional items, brochures, signage or apparel we do it all.

Be the first to know and let us send you an email when Paulding Times posts news and promotions. Your email address will not be used for any other purpose, and you can unsubscribe at any time.

Send a message to Paulding Times:

Other Douglasville media companies (show all)