StudioBeez at the Hive We are a community arts venue located in Downtown Flagstaff, offering recording services to musicians. We'll also host your next event.

Had so much fun working on this project.

Day of the Dog just got added to the bill!!

Last chance to get your ADV tickets/will calls for The Scutches, Bat Country, and Lucid Dreamer

Get your advance tickets now for the best all age entertainment in Flagstaff.

Show is gonna be awesome check out how many stops American Pinup has on this tour we're proud to be apart of this awesome undertaking.

Keep your eyes peeled for updates, kids! Don't be mad, East Coasters. We'll get to you!

This show is gonna be sick!

Man it's been a lot of back and forth but let me tell you it was all worth it Flagstaff we are proud to announce the confirmation of Voodoo Glow Skulls. These guys have seen it all with their most recent performance in the Flagstaff market being at the Tuba City Fair in 2014 to all the way back to when they were first founded back in 1988. Voodoo Glow Skulls is a long standing Ska Punk band from Riverside, CA. The group signed to Epitaph Records in 1993 and made their tour across the pond in 1996 and have globe trotted their way to Japan, Australia, Mexico and South America never looking back. Thier music has been featured on hollywood movie Bio-Dome based shot on location outside of Tucson and the blockbuster hit Mr. & Mrs. Smith.

So the bill is set and the bands have all confirmed we got Lo-Cash Ninjas from Shiprock, NM making the drive out to Flag and The Blissins from Tuba and Rei Gurren from Window Rock out to represent.

Congratulations to Alex Begay for winning the Bad Idea Central mix and master competition. Bad Idea Central informed it was a hard decision with each of the mixes having subtle differences from studio to studio. In the end it was Alex's track that they chose. I want to personally that the Bad Idea Guys for being open to this method of recording. Its unconventional and I guess so are they. Special thanks goes out to Aarin with No Other Option, Donald with Disco Pilot, and Austin Allen with Not Nearly for this to work we needed your hard earned time and help to give Bad Idea Central options. Thanks so much.

This has been a lot of fun working with all the e studios and the Bad Idea Central guys can't wait to see who they pick for to mix and master their first EP.

All the entrees have been made for the Bad Idea Central mix and master competition. Thanks to, in no particular order: Arson Aarin with No Other Option, Donald Seago with Disco Pilot, Austin Allen with Not Nearly, and Alex Begay for entering. We will be listening to the submissions with the Bad Idea Boiz and will announce the winner Monday morning.

We got Eugene, Oregon's finest country/metal/punk band The Lowmen playing for you on January 18th. This group of great performers play with a style that will kick you in the teeth and make you ask for seconds! We had these guys first a couple of years ago with Japan's energetic rock and roll group Mugen Hoso and couldn't say no when they asked to play the Hive again in 2015. These guys just released their newest album back in July of this yeaer and are on the road playing country metal at its finest. The Lowmen are comprised of Danny P. on VOX and DRMS, Tad on BASS and VOX, Jeff on Lead GTR, and Tristan on Lead GTR. This four piece outlaw country group is a sure guarantee of a good time.

Getting ready to meet with Bad Idea Central's very own Dale Harryman as we go through the tracks one by one. Stay tuned for more updates on the Bad Idea Central project as it develops! We did an interview with Cole and Kevin from stoic. about what it takes to plan a tour... Can't wait to see these guys live.

Your boys are hitting the road again for a short little run this winter.
Also, we did an interview with The Hive in Flagstaff about DIY Touring, so check that out.
http://thehiveflagstaff.com/dec-31st-stoic/?fb_action_ids=573524049460641&fb_action_types=og.comments

Disco Pilot - Put It On My Tab

Wish I could be there!

Put it On My Tab Live @ The Hive Flagstaff Video: Chase Captures

Cant wait to make the announcement of this shows line up on the 16th!

Just got a confirmation this morning from an awesome group who's played the Hive before as a headlining talent this time we got the them coming back as supporting talent.

Cant tell you who or who they're supporting till the 16th so keep your eyes and ears glued to thehiveflagstaff.com

Great to hear your still at it we miss you!

Loved having you guys

Flagstaff, you treated us very well last night, thank you! Tomorrow we'll be at Metro Bar in Salt Lake City and we're putting on our dancing pants...we suggest y'all do the same!

Our neighbors from the West, Distinguster and Words From Aztecs both Las Vegas, Nevada deathcore/metalcore bands are hitting the DIY scene hard on a four state, two week long tour. With High energy and a hunger to tour we couldn't let them skip Flagstaff. Get ready on Friday January 7th, 2015. In the spirt of kicking off the new year and our third year open we wanted to pack the Hive with great bands for the month of January. We know Distinguster and Words From Aztecs can bring what you want hear.

Distinguster is composed of four members: Josh on vocals, Ian on guitar, Brad on bass, and Jake on drums. They're just getting started, having formed in 2014, but don't let that fool you. Already having recorded a single called "Deadweight" which you can listen to on Bandcamp or right here, they wasted no time making a name for themselves and for the Las Vegas hardcore scene.

Let's not leave out the long-standing Metalcore/Deathcore/Hardcore Las Vegas legends Words From Aztecs. This hard-hitting heavy metal roots band is composed of Skyler on vocals, Kevin and Danny on guitars, Bailey on bass, Enrique on Drums. This deadly five-piece blends chunky breakdowns and brain busting blast beats with back and forth screaming vocals. Listen to my favorite "Abolished" off their newest EP "BROKEN SANCTUARIES".

For more information on both of these bands go to their pages:

Wow what a great show last night! Special thanks to the following: Alec Tippett who tells me there is much talk about a show in March that could bring Low Cash Ninjas out to open for some old school heavy hitters; Ryan Deronge who ran sound for all the bands; Ramon James who made last night posable by booking and promoting Mad Conductor; all band and fans thanks for you support of Flagstaff's premier DIY venue the Hive.

Don't forget to text "livemusic" to 40518 and opt into Flagstaff's text blast for special events, shows, and deals.

Up coming shows around Flag.
Friday @ the Hive - Communist Kayte, Till I Fall, and the Blissins $3
Saturday @ the Fridge - Comeback (CO) who's shooting scenes for a new music video that night

Last the Hive is still taking tracks or request to record for the Comp. Go to http://www.Thehiveflagstaff/thecomp for more info. 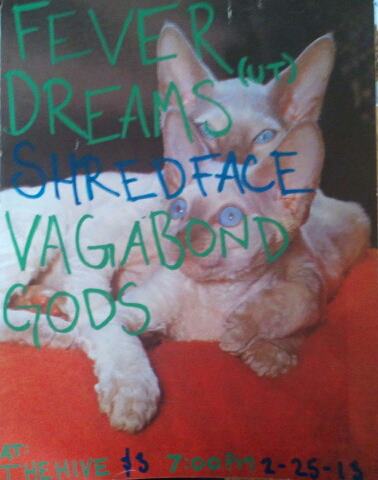 The Blurs start at 730, then Vagabond Gods, then Shredface, then Fever Dreams from Utah.

We've got a lot of cool shows in the works got The Hive!

Don't miss out.
Tell your friends.

Show booking have grow to the point StudioBeez.biz is looking to hire its first

StudioBeez.biz is looking to hire its first Official SBZ Booking Team Member. This is a paid position.

You would receive all booking request form emails form the SBZ booking page.

You would check the Hive's events calendar via a shared google calendar, update events, and make events.

You would be given admin permissions on the StudioBeez.biz facebook account to allow you to make posts and create events.

PAYMENT...
If you are interested reply with a fixed booking rate. You would be paid per show.

If you have questions post bellow in the comments

The Hive and StudioBeez is looking for all local bands. After the success of our last Short Notice Show there has been much talk of making it a once a week thing. We would like your input as to how much the door price should be and what the minimum number of bands you would like. 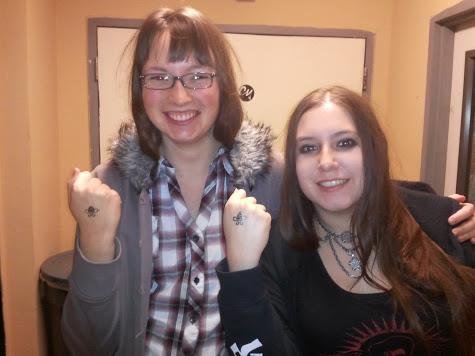 Jan 26th Show at the Hive

Thanks everyone for another fantastic Bring Your Own Beats Event.
The winner of this months prestigious BYOB prize cash money $50 gift certificate compliments of Arizona MusicPro is Sam Reeves AKA SAVO for throwing down a nasty aggressive bass heavy set.
Thanks to Squid, Serene, Impulse, Sir Sweeps A lot, Kitty Sparkle, Humation, Savo, Isick Jurasick, and Death Wilson for throwing down tunes.

Sam Reeves, otherwise known as Savo, is a 15 year old EDM producer, remixer, and DJ from the mountains of Northern Arizona. Already supported by nu...

Judging immediately following the last DJ set!
Be there to support you favorite DJ!

Be the first to know and let us send you an email when StudioBeez.biz posts news and promotions. Your email address will not be used for any other purpose, and you can unsubscribe at any time.

Send a message to StudioBeez.biz:

Other Music production in Flagstaff