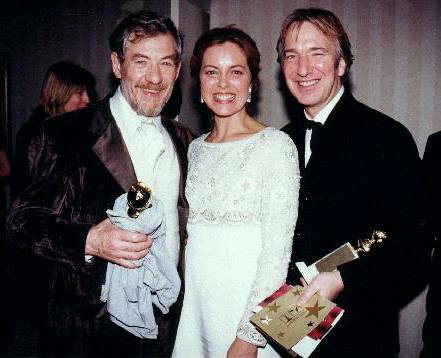 There is so much that is matchless to remember about Alan Rickman. His career was at the highest level, as actor on stage and screen and as director ditto. His last bequest of his film “A Little Chaos” and his indelible performance as Louis 14th, should now reach the wider audience they deserve.

Beyond a career which the world is indebted to, he was a constant agent for helping others. Whether to institutions like RADA or to individuals and certainly to me, his advice was always spot-on. He put liberal philanthropy at the heart of his life. He and Rima Horton (50 years together) were always top of my dream-list dinner guests. Alan would by turns be hilarious and indignant and gossipy and generous. All this delivered sotto, in that convoluted voice, as distinctive as Edith Evans, John Gielgud, Paul Scofield, Alec Guinness, Alastair Sim or Bowie, company beyond compare.

When he played Rasputin, I was the Tzar Nicholas. Filming had started before I arrived in St Petersburg. Precisely as I walked into the hotel-room, the phone rang. Alan, to say welcome, hope the flight was tolerable and would I like to join him and Greta Scacchi and others in the restaurant in 30 minutes? Alan, the concerned leading man. On that film, he discovered that the local Russian crew was getting an even worse lunch than the rest of us. So he successfully protested. On my first day before the camera, he didn’t like the patronising, bullying tone of a note which the director gave me. Alan, seeing I was a little crestfallen, delivered a quiet, concise resumé of my career and loudly demanded that the director up his game.

Behind his starry insouciance and careless elegance, behind that mournful face, which was just as beautiful when wracked with mirth, there was a super-active spirit, questing and achieving, a super-hero, unassuming but deadly effective.

I so wish he’d played King Lear and a few other classical challenges but that’s to be greedy. He leaves a multitude of fans and friends, grateful and bereft.

Roosevelt: Charge The Bear stars our friend Phil Johnson as President Theodore Roosevelt, one of the most fascinating people of the 20th century. Phil (pretty fascinating himself!)co-wrote this one man show with Marni Freedman and workshopped it at AAT in 2019 - this year it's receiving a full premiere.... virtually! Buy a ticket and watch Roosevelt come to life in this riveting and passionate performance. Roosevelt: Charge The Bear is presented by the award-winning Roustabouts Theatre Company based in San Diego.
✨Now streaming on-demand 24/7 through December 13.✨ Tickets and more info: https://www.theroustabouts.org/roosevelt

We have made something special for you!!! AND HERE IT IS!! You have a front row seat for the The World Premiere First Ever Double Magnificent Intergalactic MINIATURE Halloween Parade Produced by New York’s Village Halloween Parade, the first annual online MOVIE event is hosted by Basil Twist’s f...

Deep in the Heart of Texas: A Discussion with Barry Corbin

Barry Corbin is a national treasure! One of my very favorite actors - we are SO blessed and inspired to watch him work and hear his wisdom. Love you Barry and Jo!!!

Veteran actor Barry Corbin discusses his approach to his craft, working with the Coen brothers and hippie Shakespeare Social distancing has not been an issue for Barry Corbin. The Emmy-nominated actor spends most of his time self-quarantined at his Texas home when he’s not working, though based on

I think #JulianSands invented 'The Hot Yoga Poetry Slam' last night! Such gratitude to Julian for the on fire performance and to our amazing audience too!

SO excited to announce that we’re doing a limited run of “Nothing Ever Goes On Here” in NYC at Theatre 54 in June! 💗Who says you can never go home again? (I’ll let you know if it’s true!)
https://8Lights.BrownPaperTickets.com

Encore or separation anxiety? 🥰 Both! So one more time - the brilliant Julian Sands and his dead poets✍️this Saturday, 7pm at Actors Art!
https://Poet.BrownPaperTickets.com

Congratulations to The Roustabouts, Phil Johnson and Marni Freedman! What a wonderful, inspiring play you have-we’re so happy you shared TR with us! Come back soon...

A wonderful weekend of TR with Phil Johnson. Congrats to Phil and Marni Freedman on the successful workshops of the show. Thanks also to Actors Art Theatre and Jolene Adams.

Thanks for checking out our workshop production in LA last night. We had lot of great feedback.
2 more to go!

AAT is SO excited to have Phil Johnson back in our clutches! Please come down to see his new solo this week! Thursday - Friday - Saturday only. For more info & tickets:
bear.brownpapertickets.com

Actors Art Theatre is happy to announce the world premiere of the solo show “Nothing Ever Goes On Here” starring Ellen Newhouse, written and directed by Jolene Adams, adapted from the memoir, “Nothing Ever Goes On Here” by Ellen Newhouse. This team brings to life the steps and leaps Ellen took to wrest her life back from the trauma of parental abuse and neglect. We hope you will come down to AAT to experience this heart wrenching, slightly hysterical odyssey from hell, heaven and what’s in between.

Happy Birthday Teddy!!! 🐻 Come down to Actors Art to welcome back our great friend and big talent Phil Johnson... and you know there will be birthday cake!!

TR says, "It's my birthday!
By Presidential Proclamation, I declare that there will be 3 workshop presentations of the new play by Phil Johnson & Marni Freedman."

The Roustabouts Theatre Co., in association with Actors Art Theatre, is proud to bring our show to Los Angeles Nov. 7-9.
Get tickets here:
https://bear.brownpapertickets.com

Here’s a good reason to visit Seattle in September!❤️

Starting the summer off tonight with 3 performances of “Nothing Ever Goes On Here” best selling author, Ellen Newhouse’s solo show. We’ve been percolating this one at Actors Art and are excited to share it with you before we take it out of town this summer.

"Nothing Ever Goes On Here" Los Angeles dates - excited to share Ellen and our workshop production with you!!
https://actors.brownpapertickets.com

What we're doing this Sunday in Saugerties, NY at 4pm...

This true story adapted from Ellen Newhouse’s best selling memoir explores the lines that blur between loyalty & betrayal, love & hate, laughter & tears. It’s a raw look at a family living in the shadow of a charming but cruel father, an intelligent but mentally ill mother and a child who miraculously breaks the chain of generational abuse.

Hope you will join us...
Tickets: $15
https://here.brownpapertickets.com

Rehearsal overload with Ellen Newhouse SO much fun!😍✨

AAT February 2019 -Come down and see something!

So happy to have an encore of Julian Sands and his favorite poets at Actors Art - 11/17th(7pm) & 18th(4pm)! https://GhostsLovers.brownpapertickets.com

Always productive rehearsals when Ms. Newhouse flies in and lets me work her to exhaustion - before and after much food and adult beverages... an AAT tradition!

Had a quick rehearsal today!

Ellen Newhouse is no sloth!😆Having a great time binge rehearsing “Nothing Ever Goes On Here” with this amazing woman!

3 hours that will kick your butt into action, give you tools to develop your documentary idea and take it from concept to screen.

Taught by award-winning critically acclaimed director, writer and producer, Bryan W. Simon. Bryan’s third film, the comedy documentary I’M NO DUMMY, was the first feature length documentary on ventriloquism. It was picked up by Salient Media and NBC/Universal. It was re-released in a Limited Edition Two-Disc set and received a world wide release in 2016.

Whether you are a filmmaker, film enthusiast or someone who wants to learn more about filmmaking and documentaries, this workshop will teach you how to make a doc and appreciate them even more.

THE STANDARD BEARER One Night Encore at the intimate 30 seat Actors Art Theatre in Los Angeles.

"Played by Neil Dickson with perfectly modulated self-importance and cultural cluelessness, the unnamed actor has arrived late for his performance in a remote schoolhouse, after a nightmare trek through the bush that has incapacitated his costar wife….The piece cuts deeper than mere parody...smartly directed by Julian Sands…staging delights in depicting the tropes of no-budget theater…”
LA TIMES

BackStage says that THE STANDARD BEARER director, Julian Sands "is no slouch" and Neil Dickson's "mood shifts and seriocomic timing are impressive, the gradations of inebriation especially convincing, the mastery of Shakespearean technique complete." So, come to Actors Art and see for yourself - 3/18 & 3/19!

Two Wonderful Solo Shows we're percolating at Actors Art for the Hollywood Fringe... From Como To Homo & Snatched! Loving working with these two forces of nature!

We do a couple of these free Labs each year to encourage actors (that we love to play with!) to write and hone acting skills through storytelling. It starts off with a story, real or fantasy or real+fantasy, then we add simple improv exercises and a little structure to develop it into a written piece. Two rehearsals and one performance - on or off book. Simple. Terrifying. Fun.

Do you have a great holiday story? Let us know: [email protected]

We're playing with one of our favorite theatre companies - Savage Players down at LATC...here's the flyer, come see Grady and his hump, Virginia and her corset, Herman and his schnoz, me and my bloomers! We may be having a little too much fun... Admission is free and reservations are not necessary, but if you want to make sure you get a seat, send me an email and I will put you on the list. xoxo

Be the first to know and let us send you an email when Actors Art Theatre posts news and promotions. Your email address will not be used for any other purpose, and you can unsubscribe at any time.

Had a quick rehearsal today!

So many great free virtual events to attend in my feety pajamas!🤶