#NewMusicAlert Australian band 5 Seconds of Summer will be releasing their 3º single from their upcoming album "Me, Myself and I "on May 11. 5SOS are just making this year their own.

You can pre-save here: https://5sos.lnk.to/MeMyselfAndITW

Interscope Records will release Music From The Motion Picture Top Gun: Maverick on all DSPs and in stores on May 27. Available at all digital retailers, as well as CD, the soundtrack is available for pre-order now . A Target exclusive CD of the soundtrack will include an exclusive cover and poster and is also available for pre-order . Arriving as one of the most anticipated blockbusters of the year, Paramount Pictures will release the upcoming major motion picture Top Gun: Maverick in theaters nationwide the same day.

@bts_bighit BTS announced the name of their upcoming album "Proof" an anthology to their 9 year career with 3 new songs. Proof will be released on June 10. Army, are you excited? 💜 Drop purple hearts in the comments if you are excited.

Puerto Rican singer-songwriter, Kany García, presents us with “Muero”, a song with Alejandro Sanz. This new single is also part of her new record production "El Amor Que Merecemos", which is now available for pre-save.
https://kanygarcia.lnk.to/ElAmorQueMerecemos

Harry Styles is presenting "Harry's House" to fans for the first time One Night Only in New York. UBS Arena. May 20.

Register now through Tuesday, May 3 for access to tickets. Onsales begin Thursday, May 5.

#tourAnnouncement Catch diamond-selling alternative outfit @AWOLNATION on a headlining tour this fall across the U.S. with special guests @Badflower and support from British alternative rockers @TheMysterines. The “Falling Forward” tour kicks off October 6 in Salt Lake City, UT and includes stops in NYC, LA and Austin before wrapping November 18 in Seattle, WA. A full list of dates is below.

#newmusicfriday Friday is finally here, and with it your New Music Fridays: Alternative.
(And a little Kpop)
Modern Sophia- Man...I'm too old for this
Boychik-Bombed Out Buildings
The Faim- The Alquemist
Marina- Electra Heart (Blonde Platinium Edition)
Monsta X- Shape Of Love
PSY ft. Suga- That That
Jenevive- Division EP

#newmusicfriday Rock N Rollers Friday is here with new music for your ears only. Like and comment your favorite for this week.

#KPOP Remember the "Gangnam Style"? well, Kpop legend PSY collaborated with mastermind SUGA from BTS in "That That" as part of PSY's 9º studio album.
Let us know your thoughts about this iconic collaboration.

You can watch here: https://www.youtube.com/watch?v=8dJyRm2jJ-U

#NewMusic Australian band The Faim just announced their second studio album "TALK TALK" due to be released July 8. You can preorder the album this Friday, as well as a new song: "The Alquemist". You can listen to Easy my Mind, The Hills and ERA. Definetly a band you should check out!

The band will also be touring through the UK and Europe this summer.

#KPOP Superstar's TXT (TOMORROW X TOGETHER) announced official dates for their upcoming "WORLD TOUR 개최 안내"
You can get your tickets here:
https://ibighit.com/txt/kor/tour/act_love_sick/

#newmusic Cassie Marin returns with her new single, "Push Me," out on all streaming platforms.
Opening with Cassie’s signature buoyant electro-pop production, it’s easy to get lost in the groove of "Push Me." But underneath the high-energy beats and fizzy synths.

Lil Nas X Just announced tour for this year through the US. Presale starts tomorrow. Go to LongLiveMontero.com

Darci returns with his new single "High Speeds" via Boom.Records. The single serves as his first offering in 2022. It showcases his artistic versatility as he skillfully weaves hip-hop, dance, and R&B, resulting in a captivating sound and garnering over 100M catalog streams to date and 1.5M monthly listeners on Spotify alone.

"High Speeds" finds Darci returning to form as he provides a sound that listeners will recognize and resonate with as he wonders about future possibilities. Speaking on the new single, Darci shares, "I wanted to kick things off with a record that felt close to my roots, the sound that brought us to this point, with 'High Speeds' I feel like we hit that mark, I'm hoping y'all who listen feel it as much as I do. Plenty to come this year!".

#KPOP Comeback season wouldn't be complete without ASTRO 아스트로! After the amazing sub-units released previously this year, the whole group (MJ, JIN JIN, EUNWOO, MOONBIN, ROCKY AND SANHA) just announced "Drive To The Starry Road" The group's 3º Full Album. We are super excited. #aroha how are excited are you?

#KPOP Group SEVENTEEN are preparing to release their 4º full album "Face The Sun" . You cannot miss this amazing comeback coming to you May 27.
Carat are you ready?

They are on the next level.

WAKE UP, THE WORLD

#Kpop ATEEZ just teased their upcoming comeback for July with a mysterious video that made Atiny remember a performance by the group at a competition last year.
Do you any theories?
Watch here: https://t.co/6W8sYIDUJU

#NewMusicFriday Thank god it's finally Friday!!! From Rock to Alternative to Latin Music, this are the newest releases.

#NewMusic Chart topping, Dance Gavin Dance have announced the release of their new album "JACKPOT JUICER! today. The follow up to 2020's AFTERBURNER which topped charts and debuted at #14 on the Billboard Top 200 , will be released on July 29th.
https://riserecords.lnk.to/JackpotJuicer

Metalcore legends, We Came As Romans have collaborated with deathcore innovators, BRAND OF SACRIFICE to release "Darkbloom (Reimagined feat. Brand of Sacrifice)" today. The reimagined version of the single, originally released by We Came As Romans in July of 2021, is released via Sharptone Records and can be found on streaming platforms and is accompanied by an official visualizer.

#NewMusicAlert Band The Dangerous Summer is "Coming Home" This April 29.
You can pre-save here: https://lnk.to/cominghometds?fbclid=IwAR1fdwPRW06SrJ2bjjslQ9nfy-EC48-cw1NlGRqEWaVwGW0SvAPzNQmhgBU

#Kpop We are excited because aespa
will be performing at the main stage at #Coachella this weekend! The group’s Coachella appearance will be their first live concert performance in the United States since their debut just 18 months ago.

#NewMusicMonday Lizzo Just announced her new album ‘Special’ out July 15th.
Please tell us in the comments which is your favorite Lizzo song.

#NewMusicAlert The multi-award-winning singer-songwriter Ozuna and the breakout artist and Latin GRAMMYⓇ nominee Boza unite their talents in a new single titled “Apretaito”, which promises to become another reggaeton classic due to its catchy rhythm and its crafty lyrics.

#Coachella Across both weekends of the Coachella Valley Music and Arts Festival, step into the psychedelic surrounds to experience the first-ever
Pleasing Polish Bar.

#Kpop After almost a year after their last comeback, male group
TXT (TOMORROW X TOGETHER) announced their comeback on May 9 with "MINISODE 2: THURSDAY'S CHILD". We are beyond excited for this new TXT era, how about you?

#NewMusic Blazing rock trio The Black Moods warm up listeners with another new track, “Hollywood,” taken from their upcoming June 3 album INTO THE NIGHT via Wit Hustle/The Orchard/Steelhorse Entertainment. Streaming now across all digital platforms, “Hollywood” unflinchingly looks at the dark side beneath the glitz and glamour of the star-studded entertainment capital. Listen here: https://orcd.co/tbmhollywood.

Be the first to know and let us send you an email when Rival Mag La posts news and promotions. Your email address will not be used for any other purpose, and you can unsubscribe at any time.

Behind the Scenes with Actress and Singer/Songrwriter Hayley Orrantia for Issue 3 Releasing this Friday! 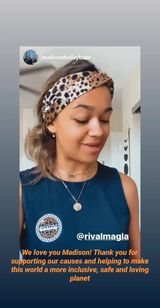 Rival Issue 2 Print Orders Have Arrived!! Shipping out this week!!

Behind the Scenes with #ozark actress #madisonthompson

Grab your print copy this weekend and one lucky winner will find a ONE OF A KIND, AUTOGRAPHED #Rudypankow Polaroid in their package! We use only the highest quality print labs, no cheap flimsy paper here!! This is fine art!

Thank you all for the support