In every decade since its founding, The Village has produced many of the most memorable songs and soundtracks of that era. Built as a majestic Masonic Temple in 1922 and then later the American headquarters of the Maharishi, this historic landmark has been a premier recording studio since the 1960’s.

Happy International Women’s Day from the lady engineers of Village!

Throwback to Dr. Dre and Snoop Dogg in Studio A!

House Judiciary Committee chair Jerrold Nadler (D-NY) has scheduled a hearing on the proposed American Music Freedom Act. It should be a great forum to shed light on the inequity and build support for performance rights.

Check out MusiCares charity auction this Sunday. MusiCares is doing great work to support the music community. Every item in this auction is legendary!

Farewell to our friend

We had a surprise delivery of this sweet letter from Lillian from an elementary school in Kentucky! Lillian sent us her Flat Stanley and we took him on a Village adventure! Check out Flat Stanley’s adventure ➡

The perfect addition to your tree this year 🎄EXCLUSIVE Village Ornaments

Check out our lovely one and only studio manager Tina Morris on Insights In Sound!

"She's a prima ballerina and a consummate shredder, an audio engineer and a solder jockey, equally at home setting up a mix and dropping an engine block. And if that's not enough, she has her finger on the pulse of one of LA's most legendary studios. We get into it with the human dynamo known as Tina Morris."

She's a prima ballerina and a consummate shredder, an audio engineer and a solder jockey, equally at home setting up a mix and dropping an engine block. And ...

What would we do without tea or coffee in studios!
.
.
.
repost from @traycar1

Absolutely loved having @sylvia_massy & @mixwiththemasters in Studio A! Check out MWTM if you want to see her record a guitar through a pickle 😯

Who misses the ping pong table? 🏓

Be the first to know and let us send you an email when Village Studios posts news and promotions. Your email address will not be used for any other purpose, and you can unsubscribe at any time.

Send a message to Village Studios: 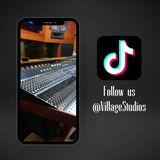 It’s Saturday Morning #LetsShopLocal at the Cotswold Farmers Market 😎 Love seeing so many “New to the Market” faces here! Go shop with them and share the love! 😍 Check out all the fun at the @CotswoldFarmersMarket #Coffee from @NomadCoffee #FoodTruck along with lots of #Farmers new to the market like Patrick and Melissa Crowe of CrowesGrow with delicious #Microgreens 🍃and Ben and Erin Cooper of Coop's Blooms and the new Queen City Cooperative with all kinds of #kale and other #LeafyGreens, #Eggs , and #FreshFlowers 🌸 Buy #handmade #Pottery from Village Studios ; #NCBeef from Edgerton Farm and more; and today #ShopLocal to #LiveMusic from the #SmashingBriefcases 😎 The Market is open from 8 am till noon every Saturday! Don’t Miss It!
Fantastic time with such an amazing group! Drums by Robert Sput Searight keys and vocals by Dominique Xavier Taplin and Steve Maggiora bass by Jon Button Bass Player and I got play some guitar, definitely punching way above my weight with this crew! Kat Aquino ran Pro Tools and it happened at the wonderful Village Studios.
Samantha Fish's repertoire of guitars was on full display at the Sugar Loaf Performing Arts Center this past Sunday night in Chester, New York. Image 1 - Gibson SG (arctic white) Image 2 - Stogie Box Blues (cigar box) Image 3 - Fender Jaguar (surf green) Image 4 - Gibson Firebird (cherry red) Image 5 - Delaney 512 (custom hollowbody) Rounder Records Village Studios
Recording Village Studios 2021 Photo: Rebeca Cristian
Recording Village Studios 2021 Photo: Rebeca Cristian
Reuniting with the #DeepDownInside crew this Saturday at Village Studios and looking forward to rocking one techy night w/ AWood + Project Mavara. RSVP link in the comments. Let’s do it like the old times! 🙌🏼
Spent the morning recording strings for a new score to Blumhouse horror film #Rejoice, directed by John Logan 🏕 exhilarating doesn’t begin to describe what it was like to be back at the Village Studios recording in person & with some of my favorite folks- thank you to the players for really nailing the music & huge thanks to the Joy Music House team for their always fantastic work/help 🙏 can’t wait to share more about the film, verry soon
Former Recording Academy / GRAMMYs Texas Chapter Executive Director, Theresa Jenkins (RIP) with Nile Rodgers + Nakia at Village Studios for the annual P&E Wing Party. Feb. 3, 2015
Paul Pappy Middleton, Former Recording Academy / GRAMMYs Texas Chapter Executive Director, Theresa Jenkins (RIP) with Nakia at Village Studios for the annual P&E Wing Party. Feb. 3, 2015
7 yrs ago today in LA for the 57th GRAMMYs + annual Producers and Engineers Wing party at Village Studios. It was such a fun night hanging with my fellow #TXChapter members. I’ll never forget the look on Theresa’s face watching Nile Rodgers play live 5ft in front of her. Miss her so much. RIP . . . #Grammys #recordingacademy #boardofgovernors #nilerodgers #rocklegend #chic #tbt #ThrowbackThursday
Tonight we’re here at College Street Music Hall in New Haven, then Philly tomorrow, and Harrisburg Sunday. Visit citizencope.com/tour for tickets & more info!! Check out the story for a behind the scenes look at a studio session with string section recorded Village Studios. New music coming soon!! 1/21 New Haven, CT College Street Music Hall 1/22 Philadelphia, PA The Keswick Theatre 1/23 Harrisburg, PA Whitaker Center for Science and the Arts #citizencope #clarencegreenwood #2022tour #livemusic #onelovelyday #sonsgonnarise #letthedrummerkick #songs #songwriter #music #funkyned #touringartist #independentmusic @xz_chris_ @pauledwards0808
The 3rd music video from my album Mythical China is out (Album is out this Friday, Nov. 26)! Featuring more amazing goosebump producing vocals by Úyanga Bold, Bei Bei 荷蓓蓓 on Guzheng, and Jie Ma on P**a, all recorded by Alvin Wee! The 4 of them also recorded on the score for Disney's Mulan (composed by Harry Gregson-Williams), and we even recorded this at the same studio Mulan was recorded at ( Village Studios)! This theme reflects the reverence for dragons in Chinese culture. As the tale goes, four dragons heard humans begging for water, so they scooped up water from the sea and rained it down over the land. This angered the jade emperor who imprisoned the dragons in four mountains and they became the four rivers that flow across China. https://youtu.be/OCTZTh0tqqA Link to Album: https://smarturl.it/MythicalChina Videography: Landon Donoho Animation: Trilina Mai Orchestra: #SynchronStageOrchestra Synchron Stage Vienna My thanks to Audio Network