"As for the experiences itself, Raimi reveals, 'Telling the story was such a gigantic endeavor. And there's a lot of dimensionalized visuals that we use in telling that story. We shot it with an eye toward that. So I think it's going to be a very exciting experience to go to 3D.'"

The Madness begins, exclusively in theaters May 6! From all of us at Stereo D, we'd like to congratulate Marvel Studios on their win at the 2022 Advanced Imaging Society Lumiere Awards for 'Best use of 2D to 3D' on 'Shang Chi and the Legend of the Ten Rings'. We are so proud to have helped bring this incredible film to life.

We’re grateful to have had the opportunity to bring “the most exciting, surprising, and emotional Spidey of them all” (Deadline) to the third dimension. 🕷

We’re so proud to have provided VFX for the newest @marvelstudios series, ‘Hawkeye’🎯

A huge congratulations to the Stereo D VFX teams for their contributions on this exciting new Marvel show! 🎯

Don’t miss seeing this feat of filmmaking on the big screen!

‘Eternals’ is now playing in theaters and on demand! 🎥

To all our amazing colleagues, friends and family, wishing you a very Happy Diwali! 🪔

Smashing a second week at the box office!! ' Shang-Chi and the Legend of the Ten Rings' Well done to our team of LEGENDS who worked on this in LA, Toronto and Pune. Find your names 👇🌟

We are hiring for our conversion team!

Are you looking for a new opportunity in Production? Want to join a fun, awesome team? Work on great projects? Then we want to hear from you!

How to apply:
Email your resume to: [email protected]

Are you looking for your next career opportunity? Want to join a fantastic team? We are hiring for a number of roles! Featured roles this month are:
✔Software Developer, Python & C++ (Experience: 3 years minimum, Ontario based)
✔2D FX: Artist, Senior, Lead & Supervisor positions available (Canada based)

How to Apply:
👉Send portfolio (Reel/Resume) to [email protected]
OR
👉TAG a friend below!

Who's game? 'Free Guy' is #1 at the box office! HUGE congrats to our team of stars who went to the next level working on this one!🎮🍿😀

Natasha's ready for her story. 'Black Widow' is now in theatres and on demand! Well done to our amazing team on another action-packed ride! 🕷 Tag yourselves!

Deluxe Animation is hiring, check out what positions we have available:

Or
👉Tag a Friend here!

As Black History Month comes to a close, we would like to highlight some of the talented and accomplished black actors and their characters from projects that Stereo D has worked on over the years. Which character is your favorite?

Congratulations to all the nominees for the 2020 Canadian Screen Awards! Full list here:

See the nominees for the 2020 Canadian Screen Award Nominees.

Here’s how Stereo D pulled it off.

Two films we are proud to be part of are up for awards tonight! 'Marvel Studios’ 'Avengers: Endgame' is nominated for Best Visual Effects, and LucasFilm's 'Star Wars: The Rise of Skywalker' is up for Best Original Score, Best Visual Effects and Sound Editing at the Oscars! Tune-in to the 92nd Academy Awards tonight at 8 PM eastern time on ABC. Which movies are you rooting for?
https://oscar.go.com/

Be the first to know and let us send you an email when Stereo D LLC posts news and promotions. Your email address will not be used for any other purpose, and you can unsubscribe at any time. 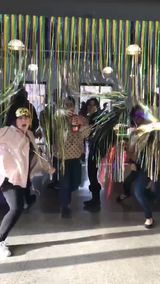