On October 21st, 2012, New Voices Short Film Festival, kicks off its first annual one-night only film fest. This year we will see "New Voices from Italy".

http://www.nvfilmfest.com At the New Voices from Italy Short Film Festival 6 award winning films from all over Italy will be screened for one night only! Festivities start at 6pm, pizza, wine, and conversation will be had. Come out and dip your nose in some culture. Meet some of the up and coming filmmakers who are breaking down the doors of conventional film making, keeping the independent alive

http://www.nvfilmfest.com At the New Voices from Italy Short Film Festival 6 award winning films from all over Italy will be screened for one night only! Festivities start at 6pm, pizza, wine, and conversation will be had. Come out and dip your nose in some culture. Meet some of the up and coming filmmakers who are breaking down the doors of conventional film making, keeping the independent alive

Some more peeps doing there thing!

The 40th Clermont-Ferrand Short Film Festival is taking place on the February 2 to 10, 2018.
http://www.clermont-filmfest.com/

Check out this great short film! Silence is golden thank you Tony Winward!!!!!

Today is the Day!! See you all tonight!!! You can buy your tickets at the door or you can get them here
www.nvfilmfest.com

Very cool link about big name directors who started off doing short films. We are at about 5 days and counting for Nvfilmfest!
http://www.intel.com/content/www/us/en/ultrabook/experience/fourstories/shorts-to-features.html?fb_action_ids=10151261278526240&fb_action_types=og.likes&fb_source=aggregation&fb_aggregation_id=288381481237582

A Minute With: Philip Seymour Hoffman on The Master | Reuters

NEW YORK (Reuters) - Since the release of director Paul Thomas Anderson's new movie, The Master, talk by filmgoers and critics alike has spanned its link to Scientology, themes of control and its Oscar

Here's a little snippet of the beautiful, award winning short, "Via Curiel, 8" an animation film compiled from more that 4000 illustrations. I got to watch this film in France this April and was completely blown away! "Via Curiel, 8" will be showing for one night only at the Silent Movie Theatre this Sunday! https://vimeo.com/48107245


A special screening of Officine Kaplan’s new film, “Death of a Star” will be the opener at the film fest this year. “Death of a Star” is a short film about the last hours of a fallen Hollywood movie star. www.nvfilmfest.com October 21st, 6-9pm Los Angeles CA

And so, we have successfully raised $10,000 for the New Voices from Italy Short Film Festival! Took the Italians to the Silent Movie Theatre yesterday to check out the space. If you havent been, you should go this month. Especially for NVFilmFest but they are also screening all of the classic horror movies every tuesday this month.

Tickets can be bought here www.nvfilmfest.com or you can pick them up at the door!

Next Sunday October 21st, 6-9!!! Films will start screening at 6:30 and wine, pizza and conversation will be had following the screening.

Very excited, and incredibly proud to present these films at such an amazing space.

We know everyone and their mother will be at the festival Sunday the 21st, but what movie are you most excited about? Ours was The Master, now its Django Unchained!
Tell me
Tell me
Tell me the answer .....

Check out the trailer for the award winning short film
"Suicidio di un Paraplegico" or "Suicide of a Paraplegic". Quite simply put, its a masterpiece. An amazing way to use ten minutes and make a lasting impact through the medium of film.
http://www.youtube.com/watch?feature=player_embedded&v=z5Vw0CYpzmg

Martin Scorsese will reteam with Bahman Ghobadi as executive producer for the Kurdish-Iranian director’s next U.S.-set film.

Whens the last time a film made you think about it, days after seeing it? What film was it? 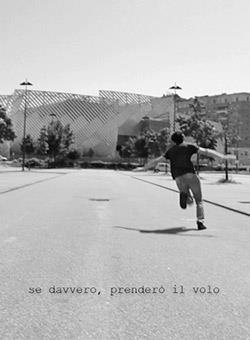 SE DAVVERO, PRENDERÒ IL VOLO or "If I Really Started to Fly"
Won the "Best Short Film Award" at the Spazio Torino Film Festival and we have it for one night only!
Its a beautiful film that plays with the imaginary lines of reality. October 21st at the Silent Movie Theatre. www.nvfilmfest.com

Another short film by none other than "The Master" himself, Paul Thomas Anderson, this is "The Dirk Diggler Story", a short that became "Boogie Nights"
http://www.youtube.com/watch?v=qnyYGFTg8YI

GAD ZOOKS! It's only 20 days until the festival! Did you get your tickets yet? You can purchase them here www.nvfilmfest.com . Today Alessio Mattia arrives from Italy. His short film, "Mr.Doyle" will be playing at the festival!

Short films are the Gateway drug for all future filmmakers.
Check out THIS short film, written, directed, shot and edited by none other than Christopher Nolan!
http://www.youtube.com/watch?v=-WhKt_CkXD0

http://shortsbay.com/film/doodlebug The depths of insanity are explored by a man chasing something in his apartment with a shoe. A man is trying to catch som...

Tickets are now on sale for the New Voices Short Film Festival Presents, "New Voices From Italy"
Tickets can be purchased here www.nvfilmfest.com !

Wine Pizza, Culture, Films, your head may explode from all the stimulation!!! 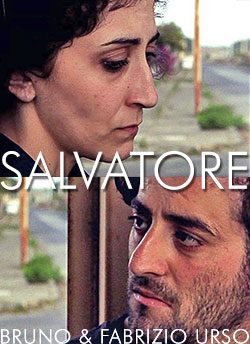 In the heart of Sicily, Alfio and Maria dream of escaping their blue collar circumstances. They struggle to survive in a society tainted by unemployment and job insecurity. Here, the right to start a family is a privilege that a worker can’t access without running the risk of losing his job. 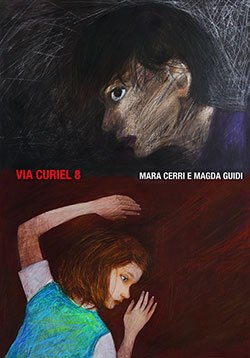 "Via Curiel 8" is an animated film directed by Mara Cerri and Magda Guidi based on the book of the same title by Cerri. A film two years in the making, Via Curiel was the winner of both the Jury Prize and Arte France Prize at the Annecy International Animated Film Festival and Best Short Film at the 2011 Torino Film Festival.
Created from more than 4000 illustrations, Via Curiel tells the story of the brief, chance encounter between a man and a woman which expands the dimension of memory for both of them. The magazine Lo Straniero called the film "A recounting of harmonious, spectacular images, told with great economy and massive symbolic tension with a notion of magic rarely found these days."

Mara Cerri was born in Pesaro, Italy in 1978 and after studying at the State Institute of Design became a children's book illustrator. In 2008 she received the Lo Straniero prize from the Arts Magazine of the same name. Her illustrations have appeared in magazines and newspapers including Il Manifesto. She works with the American agency Riley Illustration creating drawings for magazines and advertising.

Magda Guidi, born in Pesaro in 1979, studied at the State Institute of Design, specializing in animated film. She has directed a number of award-winning short animated films, including "si, pero'...", winner of second prize at the Pesaro Film Festival, and the videoclip "nuova identita'", for Italian band "Tre allegri Ragazzi Morti", winner of the Jury Prize at Videozoom of Tornaco.

http://www.youtube.com/watch?v=l6uPVultDsQ
This will be the best 2minutes and 45seconds of your day...

Still from "Suicide of a Paraplegic". This film won the best short film of 2006 at the Torino Film Festival and will be closing the night at the "New Voices From Italy" Short FIlm Festival October 21st 6-9. Tickets go on sale September 21st!!! check out the trailers for this and the other films here, http://www.nvfilmfest.com/trailers.html

MR. DOYLE
In selection for both the Turin Film Festival 2011 and the Terra Di Cinema (2012), “Mr. Doyle” tells the story of a grief stricken writer whose alter ego, the titled Mr. Doyle, begins to wreak havoc on the young artist’s life. Will life imitate art, or will the young writer find a way to put a stop to the madness?
Directed by: Paolo Gonella, Alessio Mattia 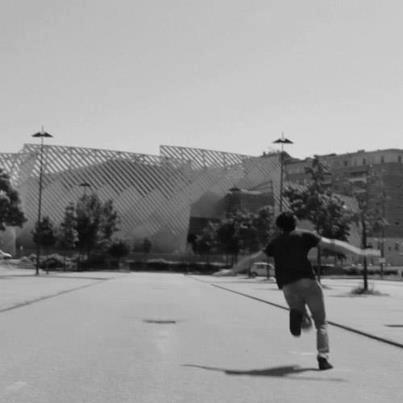 SE DAVVERO, PRENDERÒ IL VOLO,
Gino has chosen to move away to study, thus procrastinating a dream he had shared with Emilio, his best friend. In his heart he knows he was wrong, but decides to continue on the path taken, hanging on the certainties of the others.
A sudden call, however, throws him into a deep space, without consistency and without air. Like a child who is lost,he begins to run: he runs searching for the interrupted street and finds an illusion of color in the invisible places of remembrance.
Directed by: Filippo Vallegra

We added a new film to the line up! The 2006 Torino "Best Short Film" winner, "Suicido Di Un Paraplegio" or "Suicide of a Paraplegic". Sounds like a feel good film!!!! Very excited to have this masterpiece added to the evening.
CHeck out the trailer here, http://www.nvfilmfest.com/trailers.html

Check what's going on in Taranto, Italy, The film FIREWORKS , showing at the festival, deals with the subject matter of the following article. Pretty scary stuff! http://www.guardian.co.uk/world/2012/aug/17/italy-ilva-steelworks-cancer-pollution 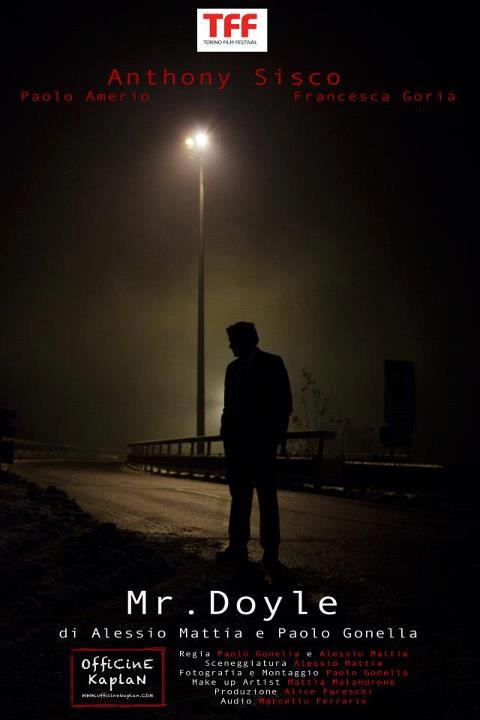 In selection for both the Turin Film Festival and the Terra di Cinema in Tremblay En France, "Mr. Doyle" will be screened for one night only at the New Voices from Italy Short Film Festival!!!!!!!!

THiS October 21st, New Voices Short Film Festival will be seeing "FIREWORKS". An epic of a short film Directed by GIACOMO ABBRUZZESE.

Be the first to know and let us send you an email when New Voices Short Film Festival posts news and promotions. Your email address will not be used for any other purpose, and you can unsubscribe at any time.