Run by Allisyn and Dylan Snyder, WTF Productions has filmed 5 shorts and 2 pilots along with editor Bryan Morrison and executive producer Bob Morrison.

Our team is so excited to share #DontTurnOffTheGhostLight and @howdyneighborthemovie with everyone! Stay tuned!

Behind the scenes shots from the icebox set of #PREACH (📸: @bringoutthegold)

Behind the scenes stills from the set of GOLD ✨

Serena Laurel, star of GOLD, with director Allisyn Snyder on the red carpet of #LALiveFilmFestival 2021, where #Gold was awarded Best Fashion Film 💫

Dylan Snyder, Serena Laurel, and Allisyn Snyder arriving at #LALiveFilmFestival 2021 for the screening of GOLD 🎬✨

Thank you to LA Live Film Festival for having us, and for awarding GOLD #BestFashionFilm! ✨

Thrilled to share that our short horror film, Room 566, is finally available to watch online! Check it out on Fun Size Horror's YouTube channel: https://youtu.be/TdL8KwH87PA

Scott waits anxiously in the ER for the status of his younger sister. After overhearing the nursing staff whispering about the superstitions surrounding room...

Help us bring this campy screenlife horror film to life! If you donate right now, you'll be contributing our 2,000th dollar!
https://igg.me/at/howdyneighbormovie

A screenlife thriller written by and starring Matthew Scott Montgomery. | Check out 'Howdy, Neighbor!' on Indiegogo.

Raising funds for a new horror flick! This is going to be a fun one! https://igg.me/at/howdyneighbormovie

What’s wrong with room 566?? Join us at Shriekfest Horror Film Festival this Saturday, October 2nd (4pm at Raleigh Studios) to find out!

Join us at Shriekfest Horror Film Festival 2021 on Saturday, October 2nd! “Room 566” will be screening during the 4:00pm shorts block at Raleigh Studios, 5300 Melrose Ave. Tickets available at the door. Pics from the first “Nasty Habits” screening! Check out the film on our YouTube channel: https://youtube.com/channel/UCnjfxVAwi2BFwF2RTtxPQEQ 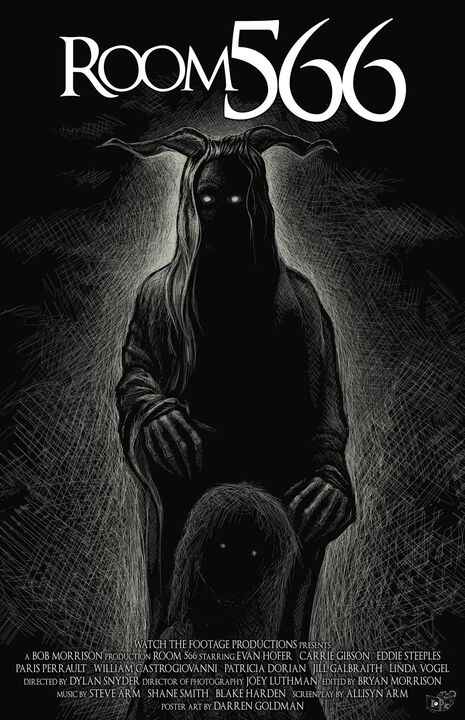 Huge thanks to Darren Goldman again for designing our spooky “Room 566” poster!! 💀🖤

BTS of #Room566, filming the nightmare sequence! Stay tuned for info on the release! 🎬

We LOVE our #Room566 cast!! Can’t wait to share the project so you all can see their incredible work! 🖤🎬

We’re looking forward to the new year and new projects! Excited to get back to work. Hope everyone is staying safe. 💙🖤

Joey Luthman and Dylan Snyder behind the scenes of a new Jamie Kaye music video! 🎥

Eager for productions to get back into full swing, but in the meantime we’re super stoked we got to spend our week working with @jamiekayemusic on two low key music videos! Here’s a BTS pic from our day in the “Rain Room” 🌧💜

‪Loving working with Jamie Kaye! So happy we could safely make this happen! 💙💜💙💜‬

BTS shot of @emiliawerynskamua working on the creature gloves on set! We asked Emilia and @keltonfx to whip together the gloves literally the week before and they totally came through! Love them!! 💀💀💀 #Room566

The beautiful creature face for #Room566, painted by @emiliawerynskamua!💀🖤

Social distancing before it was cool. 🏥😷 #Room566 “Room 566” is an Official Selection at Assurdo Film Festival, and nominated in three categories! (Best Horror/Mystery/Crime, Best Director, and Best VFX) Proud of this team! 💀🍿

Pistol for Ringo - CASE OF THE TUESDAYS (Official Video)

We had a blast shooting this music video for Pistol for Ringo!
Need an affordable crew for a shoot? Hit us up! We come with a full camera package. (Black Magic Ursa Mini Pro)
We can help you plan a shoot that allows for social distancing and keeps costs low!
Email: [email protected]
https://www.youtube.com/watch?v=OCl74t9MxKE

The official music video for PfR's "Case of the Tuesdays" from the 2019 EP, Kings Of Bad Behavior. Listen now on Apple Music and Spotify! Apple Music: https:...

Productions are starting to find ways to safely open back up again! Eager to get back to work soon. 🎥🖤 (Set environments will look much different than this picture. 😷)

Eager to get back to work when it’s safe. As much as we’d love to be making movies right now, we’re more than willing to #StayHome and watch movies to keep our friends and family safe! 🖤🖤🖤

#Room566 is an Official Selection at Hollywood Screenings Film Festival! 🎬💀

We miss being on set with our WTF family, but would rather do our part and stay at home than end up in the real hospital. Hoping we can all wake up from this collective nightmare soon. 🖤

Be the first to know and let us send you an email when Watch The Footage Productions posts news and promotions. Your email address will not be used for any other purpose, and you can unsubscribe at any time.

Send a message to Watch The Footage Productions:

THANK YOU SO MUCH FOR YOUR HELP!!!

Get involved with our new film!!

On the red carpet for WTF's #dontturnofftheghostlight movie private screening. Congratulations Allisyn Snyder and Watch The Footage Productions Photos by #uniquenicole Getty Images
I am dying to share everything Watch The Footage Productions has in the works right now! Get ready for our new LGBTQ+ horror comedies, #DontTurnOffTheGhostLight, and my feature directorial debut, Howdy Neighbor Movie! Thank you to Horror in Color: Diversity in the Dark for joining us at our private screening! Full video: horrorincolor.com/ghostlight
The new music video I directed and produced for Jessiepaege, “PREACH,” comes out tomorrow! This was my first time using Astera titan tubes, and I am definitely a fan. Get ready for lots of color. Watch The Footage Productions
I had a wonderful time at Shriekfest Horror Film Festival 2021 with my Watch The Footage Productions team. It’s always a treat to screen Room 566 for a new audience on the big screen!
Room 566 - Watch The Footage Productions (Short Film) Scott Gamble waits anxiously in the emergency room to hear the status of his little sister. After overhearing the nursing staff whispering about the superstitions surrounding Room 566, where his sister is to be placed overnight, he must get her out of the room before it’s too late. Directed by Dylan Snyder Written by Allisyn Arm Starring Evan Hofer, Carrie Gibson, Eddie Steeples & Paris Perrault Screening at the HorrorHaus Film Festival 2020 Virtual Experience October 30 - November 1. Ticket and schedule info coming soon. #room566 #horrorhausfilmfestival #welcometoourhaus #virtualexperience #horror #horrorfilms #horrormovies #film #horrorfans #monsters #ghosts #supernatural #slasher #horrorfilmfestival #indiefilmfestival #indiefilmmaking #genrefilmfestival
Check out the latest Short Films submitted for consideration to HorrorHaus Film Festival! At Your Disposal, directed by Diana Lee Woody Daybreak, directed by Jefferson Ellis Low in the Water, directed by Boone Platt - Tight Knit Productions Murderart, directed by Victor Paniagua & Victor Galiano - Asesinarte Room 566, directed by Dylan Snyder - Watch The Footage Productions The Chair That Killed Faye, directed by Taylor Allison Two-Headed Beast, directed by Nate Southard Submit your Short Film before the FINAL DEADLINE on August 5, 2020 via FilmFreeway: https://filmfreeway.com/HorrorHausFilmFestival #horrorhausfilmfestival #welcometoourhaus #horror #horrorfilms #horrormovies #film #horrorfans #monsters #ghosts #supernatural #slashermovies #screamqueens #horrorfilmfestival #indiefilmfestival #indiefilmmaking #losangelesfilmfestivals #genrefilmfestival
We love horror films twelve months out of the year - how about you? Here’s to some frightening in February! #Repost @alwaysallisyn Me and my hubby discussing our project #Room566 at IndieX Fest, where we were awarded Best Horror Short 🥰⭐️ (Follow Watch The Footage Productions for more updates on our behind the camera work!)
Me and my hubby discussing our project “Room 566” at IndieX Fest, where we were awarded Best Horror Short 🥰⭐️ (‘Like’ Watch The Footage Productions for more updates on our behind the camera work!)
Hi, I am from https://www.facebook.com/filmetria19/ Kindly, follow our page to get the latest updates on Film Festival and Cinema anecdotes. Thank you. Regards.
Watch The Footage Productions Rocked pur 300 seat theater at regal cinemas at la live Saturday night November 9th during the annual Kash Hovey and Friends event. Kash Hovey picked this and many other award winning films to screen during his annual event whereas he chooses the BEST OF THE BEST to screen prime time and cap off the festival yearly. thank you Kash Hovey for another year of great picks, as always we look forward to seeing what he chooses for the next "Kash Hovey and Friends" event in our theater, for more insider info go follow @kashhovey instagram....
Sent an email to the production email.
Our film "Room 566" will be screening at the Marina Del Rey Film Festival on Wednesday, October 23rd! Cinemark 18 & XD (6081 Center Dr Unit 201 Los Angeles, CA 90045) Exact time and link to tickets coming soon! 'Like' our page for updates! Watch The Footage Productions
Running out of space for Laurels, this film is killing it (pun intended) Great work to all involved.
Official Selection: Nasty Habits. Friday, Sep 13th at 7:30 pm. A young aspiring musician befriends a lonely truck driver, who picks her up as she hitchhikes her way to Los Angeles. #kapowiff Watch The Footage Productions