This page is a celebration of one of LA’s most popular filming locations from 1989 to 2014 The Los Angeles Herald Examiner was one of the most filmed locations in Los Angeles for 25 years.

From the The Usual Suspects to It's Always Sunny in Philadelphia to Clint Eastwood, Arnold Schwarzenegger, Christopher Nolan and JJ Abrahms, these are just a few of Hollywood's familiar names to have filmed here. Prior to filming the Herald Examiner was home to one of America's most popular newspapers. The Herald Examiner was built by William Randolph Hearst and designed by famed architect Julia Morgan.

Alias filmed in the lobby of the Herald for the season two episode Endgame.

An old and wonderful memory of the many faces of the Herald.

Huell gets a tour of the Herald-Examiner building in Los Angeles that closed in 1989, marking the end of William Randolph Hearst’s empire in Los Angeles.

They filmed in the Herald Examiner newsroom as far back as 1959. This same newsroom was home to Brooklyn 99, Usual Suspects, Super 8 and Spider-man 3 to name a few...

EXTRA! SEE ALL ABOUT IT! From The Front Page to All the President's Men to State of Play, movies have long found a newspaper office to be a lively source of ...

The final film FIXED that was shot at the Herald Examiner will be screening at the Newport Beach Film Festival in late April. If you live in the area, we'd love to see you there!

Friends! We're pleased to announce that FIXED will be screening at The Newport Beach Film Festival in Orange County!

If you're in LA or the OC we'd love to see you on Wednesday, April 26, 2017, 8:15 pm at The Triangle in Costa Mesa. Get your tickets: https://www.newportbeachfilmfest.com/event/fixed/.

The last film ever shot at the Herald Examiner.

We present... Our festival trailer!

“Allan is a father of three whose s*x life takes another hit when his wife can no longer take the pill and he soon finds himself with an appointment for a vasectomy and an epic midlife crisis.”

The article says "vacant" But, the truth is, thousands of filmmakers called it their home. Thanks for the memories!

and so begins the second to last day of filming ever at the Herald Examiner.

Congrats to Bryan Erwin and Hollywood Locations for making the Herald Examiner the most popular private filming location, once again, in LA!

And the winner is … Griffith Park.

Thanks to our latest guest Kevin Smith.

Another funny sketch that uses a lot of great sets at Herald.

Funny show. Great use of the many looks at the Herald.

A family unfamiliar with the concept of a same-s*x wedding holds a Q&A session with a gay man. Watch more Key & Peele: http://on.cc.com/1paHgrI

This music video was filmed in the old press room and breezeway. It features Turbo from Breakin 2: Electric Bugaloo. Come on now!

We built an office set right above the lobby. Here it is in action as part of the classic Tetris game.

The 3DS version comes out this week, with other editions arriving shortly.

Thanks for the kind words Blumhouse!

The California Film Commission recently found that 83% of projects that apply for, and don’t receive, its tax credit incentive decide to film outside California. Among those that stay, only a few a...

While waiting for a long-promised rehab that, like many projects, hit a wall when the economy took a dump, Downtown's handsome and historic Herald-Examiner building has found a vibrant...

Filmed in the old pressroom

Cheesy stuff in the old pressroom.

Music video by 98º performing The Way You Want Me To. (C) 2000 Universal Records, a Division of UMG Recordings, Inc.

Slipknot - The Devil In I [OFFICIAL VIDEO]

Yep. We do a little bit of everything at the Herald...

Slipknot's music video for 'The Devil In I' from the album, .5: The Gray Chapter - available now on Roadrunner Records. Download it at http://smarturl.it/the...

See a season 4 sketch’ from ‘Key & Peele’ and find out one detail about a new movie | EW.com

The 4th Floor was once the office of William Randolph Hearst is now home to a Key & Peele sketch.

Comedy Central has given a return date to a pair of sketch comedians so close, they’re separated by a mere ampersand: Keegan-Michael Key and Jordan Peele. Key...

Pieces of the Herald appear on Ellen

Her music video has captivated audiences worldwide. Sia was here to recreate her stunning video, complete with the astounding performance by 11-year-old Maddie!

Sia filmed this music video at the Herald. Kimmel does a parody. Once again the Herald is reproduced elsewhere

The star of Sia's "Chandelier" music video is a young girl named Maddie Ziegler who is a phenomenal dancer. Jimmy saw the video and decided that he and Guill...

A round of applause for G.R.L, please! Very nice music video! The girl band – whom we interviewed not so long ago – have just premiered on VEVO the official music video for their new single…

The Herald Examiner's success is profiled in The Hollywood Reporter 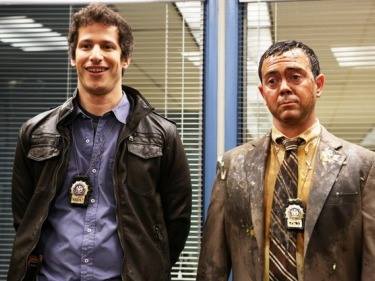 'It's Always Sunny in Philadelphia': A low-budget hit

Most popular prime-time shows aren't run by a producer and star who has to finish shooting by 6 p.m. to rush to a night job waiting tables. Then again, most shows aren't like "It's Always Sunny in...

It’s Always Sunny in Philadelphia: A History of Paddy’s Pub

Yep. The Herald Examiner has the original.

This is a magnificent unpublished shot of Houdini doing a suspended straitjacket escape at the historic Examiner building in downtown Los Angeles.

A cool piece of film history. They shot many of the scenes from the movie Wonderland at the The Herald Examiner in the early 2000's.

Wonderland was shot at the Herald Examiner. They accidentally set the building on fire. It was quite a day.

The scene playing out before cameras at the front picket gate of a Craftsman-style house in the Altadena foothills sounds like a familiar one: A put-upon wife says adios to her no-good husband, she...

Wonderland was shot at the Herald. I was the one opening the gate...Ha Ha

It seems the set of "Wonderland" was haunted. Franky G., who plays a rookie detective in writer-director James Cox's profile of the hard fall of adult-movie star John Holmes later this year, grows...

An interesting tidbit about the history of the Herald Examiner

Los Angeles has always had more than its share of creative felons, so it stands to reason that it would take an equally creative, gutsy, and dedicated reporter to cover them. One of the most revered reporters who ever worked in Los Angeles was Agness “Aggie” Underwood.

Be the first to know and let us send you an email when Herald Examiner Filming posts news and promotions. Your email address will not be used for any other purpose, and you can unsubscribe at any time.

The Los Angeles Herald Examiner was one of the most filmed locations in Los Angeles for 25 years. The Usual Suspects, It's Always Sunny in Philadelphia, Clint Eastwood, Arnold Schwarzenegger, Christopher Nolan and JJ Abrahms are just a few of Hollywood's greatest to have filmed here. Prior to filming the Herald Examiner was home to one of America's most popular newspapers. The Herald Examiner was built by William Randolph Hearst and designed by famed architect Julia Morgan. It is still owned by the Hearst family to this day.