Happy Global Exhibitions Day to all colleagues, suppliers and clients!

888 has confirmed that it has become the first online gambling operator to sponsor a National Football League team after agreeing a deal with the New York Jets.

The National Collegiate Athletics Association (NCAA) has established a committee tasked with exploring the growing US spots betting landscape and the market’s potential impact on the association’s current rules.

The second month of legal sports betting in Mississippi was significantly boosted by the beginning of the National Football League (NFL) season, with taxable revenue rising to $5.5m.

Figures from the Pennsylvania Gaming Control Board (PGCB) show that fantasy sports contest revenue has more than doubled in September after the 2018-19 National Football League (NFL) season kicked off.

Legal betting to lead to $1.7bn boost for NBA and MLB

Legal betting to lead to $1.7bn boost for NBA and MLB | TotallyGaming.com http://j.mp/2P8aZZT

The latest American Gaming Association-commissioned study on the impact of legal betting on sports league revenues has concluded that Major League Baseball (MLB) and the National Basketball Association (NBA) could together see revenue increase by $1.7bn.

Clarion Gaming has strengthened the team responsible for the ICE brand with the appointment of Alexandra Hamilton-Tomlinson to the post of Senior Marketing Executive. She is working across two of the ICE branded events including the first edition of ICE Africa (24/25 October, Sandton Convention Cent...

Gaming Innovation Group has signed a letter of intent to launch a sportsbook for its US partner Hard Rock International, while its GIG Games studio has launched its first proprietary slot.

The Delaware Lottery has seen amounts wagered on sports more than double for the period ended September 30th.

The Pennsylvania Gaming Control Board (PGCB) has awarded the state’s first sports betting licences to the Hollywood Casino at Penn National Racecourse and Parx Casino and Racing.

The American Gaming Association’s (AGA) latest Nielsen Sports survey has concluded that the National Hockey League (NHL) could see annual revenue increase by $216m due to widely-available, regulated sports betting in the US.

William Hill will now manage all race and sports operations in Nevada, Maryland and Montana for casino operator Golden Entertainment, after the companies expanded their existing partnership.

Progressive thought-leading organizations are being offered a key opportunity to put their interactive gaming solutions in front of North America’s most important decision-makers courtesy of the first ICE North America which has been confirmed for the Boston Convention Exhibition Center (13 -15 May 2019.) In response to an unprecedented demand for stand space, sponsorship and speaking opportunities, organizer, Clarion Gaming has launched its marketing campaign a full nine months ahead of the historic show opening its doors. The dedicated website is now live at http://bit.ly/2ChdzYn.

Evolution Gaming hails “true milestone” of its US entry

Evolution Gaming has been busy in recent times agreeing a number of deals alongside US-facing organisations, which has seen the firm go live with its first live casino studio in the regulated market, situated in New Jersey.

Scientific Games has united with Caesars Entertainment to usher in a new era of sports betting in the state of Mississippi.

Breaking down all the week's news into a set of easy to manage figures - GambleAware, M88 and Efbet. Read all about it at TotallyGaming.com http://j.mp/2w8vb2i

ICE Sports Betting USA is thrilled to have just confirmed NBA to speak at the conference and to explain the league’s vision for creating a harmonious and win-win cooperation between the two sectors.

NBA’s Dan Spillane, Senior Vice President, League Governance and Policy and Scot Kaufman-Ross, Vice President, Head of Fantasy and Gaming will be speaking, alongside other sports leagues’ and players unions speakers, including:

Make sure you’re there to explore your partnerships to fully maximize the sports betting opportunity for your organization. Learn more http://bit.ly/2Ki8huj

Legalised gambling has raised $2.5bn in taxes in Colombia over the last six years, contributing considerably to the Subsidized Health System for Colombian citizens. Coljuegos, the country’s gambling regulator, said:

Registration is now open for ICE Sports Betting USA 2018!
As we have launched the event earlier than last year, our super early bird rate is $749 ($100 off last year’s starting rate), which is 38% off our onsite rate. Some of our attendees from the 2017 show will know we had to shut down registration due to oversubscription, and also stream the action into another room. We now have a bigger venue, conference room and plenty of opportunities to network with all attendees.
For any registration enquiries please email: [email protected]
For Sponsorship and Exhibiting opportunities please contact: [email protected]
Learn more at http://j.mp/2MIXrzk

One year on after the launch of Sports Betting USA, it will be a whole new world by November 2018.

PASPA is no longer constitutional, states beyond Nevada will have launched regulated sports betting, and legislators from across the United States will be preparing to debate their sports wagering proposals in the new 2019 legislative session.

Is there a more opportune time to discuss how to apply lessons from those early launches, gain a broader global perspective to shape regulation and legislation in order to maximize revenues?

Join us this fall, November 27-28 New York, as we discuss boosting the profitability of sports wagering, fighting the illegal market, driving fan engagement, protecting the integrity of sports and many more...

Registration is now open for ICE Sports Betting USA 2018!
After the huge success of the Sports Betting USA conference which took place in New York in 2017, Clarion Gaming is excited to announce the ICE brand will land in the USA as ICE Sports Betting USA, bringing expertise, relationships and best practice from global markets currently allowing legal sports betting. Find out more and register at http://j.mp/2MIXrzk 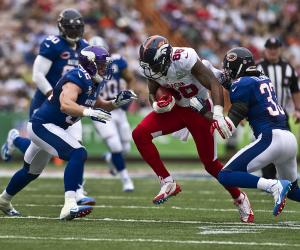 Having a responsible gaming strategy is good for prospective buyers, advises Blackstone MD, Haide Hong ahead of appearance at iGB Live! HQ

Gaming owners wishing to make their businesses more attractive to potential buyers would be well advised to have in place a credible strategy around responsible gambling, according to Haide Hong, Managing Director of The Blackstone Group and a key note at The Boardroom, one of four immersive learnin...

Clarion Gaming has confirmed the launch of ICE Sports Betting USA, a two day event that’s being held in New York across 27th and 28th November, 2018. The influential learning, business and networking event will mark the first application of the world famous ICE brand in the United States and follows the Supreme Court’s repeal of the Professional and Amateur Sports Protection Act of 1992 (PASPA). Leveraging the integrity of the ICE brand and Clarion’s track record of establishing successful events in the United States, ICE Sports Betting USA will be the only b2b event to bring together regulators, sports associations, land based casino operators, online gaming brands and technology providers alike. For more information visit: http://bit.ly/2KBqbMS

A new home for African gaming. A new opportunity for operators, regulators and suppliers. Following the hugely positive coming together of all sectors of the industry at the inaugural Gaming Africa in 2017, ICE Africa has launched – the first occasion the ICE brand has been extended beyond its Lon...

Clarion named 'most influential company of the last 25 years’

Clarion Events, organiser of world leading gaming brands including ICE London, ICE VOX, iGB Live!, London Affiliate Conference, Juegos Miami and GiGse, has been named as the event industry’s most influential company of the last 25 years. The highest accolade in the UK events and exhibitions sector...

Be the first to know and let us send you an email when Juegosmiamilive posts news and promotions. Your email address will not be used for any other purpose, and you can unsubscribe at any time.

Send a message to Juegosmiamilive:

Other Media/News Companies in Miami

Other Media/News Companies in Miami (show all)