Qoobex is the first open Global 3-D Virtual Reality Network to distribute professional entertainment, education, and business content, as well as social and gaming content, entirely in 3-D over the cloud.

Happy New Year from all of us at Qoobex! Please watch this special video we made to celebrate the new decade.

Also, we want to give a HUGE thank you to everyone who followed and supported Qoobex this past year. We wouldn't be here without every single one of you, so again, THANK YOU!

Happy Holidays and have a great New Year from all of us at Qoobex!

We wanted to share some good news to celebrate the end of 2019. Qoobex successfully presented a master conversion clip for CCTV documentary series “如果国宝会说话," or ”If national treasures could talk,” in the Louvre in Paris on 12/9. Qoobex received rave reviews from the director of the documentary and many viewers.

Under tremendous time pressure, Qoobex delivered top quality 3-D animation of the national treasure “博山炉," which was the main object for this event in Paris.

More conversions to come, please come back to visit us.

The Biggest Smartphone Unboxing EVER?

Exciting news! The QPhone was reviewed on a top technology Youtube channel, mrwhosetheboss, who has almost 3 million subscribers. Watch the trending video here, with the QPhone featured starting at 11:07: https://youtu.be/N9xiiVPa7ZU?t=667

Unboxing contenders for Top Smartphone 2019 / Best Smartphones of 2019, including LG, OnePlus, Xiaomi, Oppo and much more! Get Surfshark VPN at https://Surfs...

Qoobex is a proud sponsor of the James Burton Foundation, presenting James Burton & Friends at the Schermerhorn Symphony Center in Nashville, TN. Bringing you tomorrow's vision of entertainment.

Extremely interesting summary of MWC2019 that we attended last week. More than 75,000 unique visitors, 350 CEOS, and 1,100 industry analysts experiencing the wave of phone technology about to hit China and the rest of the world. Qoobex is excited to be a part of this mobile technology revolution.

Thanks to our amazing Qoobex team in China, we had a fabulous showing at MWC 2019! We had one of the most crowded booths for the whole conference, and ultimately we raised a ton of excitement for Qoobex and iQPhone (our Chinese brand for QPhone). All the hard work that everyone put in really paid off 🎉

We are getting ready for Asia's most exciting event for next-generation technology, Mobile World Congress 2019 Shanghai! Our CEO is working hard with the staff to prepare Qoobex's exhibit for more than 60,000 event participants.

Yesterday our CEO Mike Stougiannos was interviewed in Hong Kong on Yicai, the English-language branch of the China Business Network, the number one finance and economics news channel in China. Mike shared his insights into 3-D technology worldwide, Qoobex's strategies approaching the Chinese market, the future of QPhone, and much more. We can't wait for the interview to air soon! 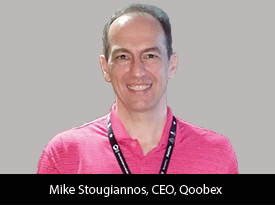 On the Heels of the Launch of Q phone and Q stores, Qoobex is on the Cusp of a Revolution

Qoobex was featured as one of the 50th smartest companies in 2017 by prestigious newsletter The Silicon Review. Read about CEO Mike Stougiannos's revolutionary vision for Qoobex here.

Revolution that will ultimately change the way we live, work and play. It will affect industries far and wide, ranging from healthcare and education, all the way to entertainment and commerce: Mike St 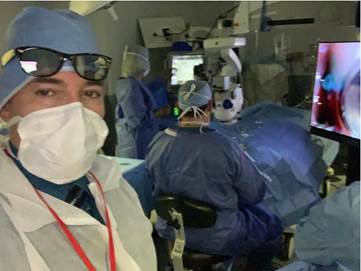 Our CEO Mike Stougiannos had the pleasure of visiting the operating room of one of the top eye surgeons in the world, Dr. Patrick Higgins, earlier this week. He watched Dr. Higgins remove membranes only 2 microns thick from the inside wall of a patient's cornea, which was only possible thanks to real-time 3-D projection of the patient's inner eye.

What's even better: The same 3-D videos used by Dr. Higgins will soon be uploaded to the Qoobex cloud! Access using QPhone or any 3-D device to learn more about the marvels of 3-D technology usage in today's world.

Be the first to know and let us send you an email when Qoobex posts news and promotions. Your email address will not be used for any other purpose, and you can unsubscribe at any time.

Send a message to Qoobex:

Qoobex is the first open global and easily-accessible 3-D VR Network. We are bringing together content providers, movie and game studios, television stations, advertisers, and electronic manufacturers and distributors and connecting them with the rapidly expanding mass market of 3-D VR end users around the world. Additionally, Qoobex is launching to the global market its own glasses-free high-end 3-D smartphone, the QPhone, which is seamlessly connected to the Qoobex Cloud Monetization Ecosystem.

Qoobex networks its end users with their friends worldwide in 3-D VR. Users are able to communicate visually from any 3-D VR device to any 3-D VR device in real time across the world. We envision Qoobex’s social 3-D VR service to be the next generation of social networks.

Qoobex has patentable technology that transforms, in real time, the majority of gaming graphics engines into 3-D VR. Through Qoobex’s 3-D VR Network and its gaming 3-D technology, players are able to enjoy their virtual gaming experience entirely in 3-D.

Q phone almost here! Q phone 3-D, glass free and supersmart about to hit the market. Q Squad getting ready to spring into action. Qoobex GSFAwards
A startup in size, a giant in heart! Equipped with the most advanced 3D technology, Qoobex is aimed at bringing the real world to real people, we live in a 3D world, we have been communicating in 2D, it’s time to get real, get Qoobex, get real!