Considered one of the greatest guitarists of our times, Rocky has appeared with legends including Rick Wakeman, Ozzy Osbourne, John Lodge, Steve Vai, Leland Sklar, Kenny Aronoff, and a cascade of others.

Rocky Kramer is a Norwegian artist relocated to California with a love for the energy of seventies and eighties hard rock, as seen on his record “Firestorm.” I sat down to talk with him about his musical inspirations. Edmund Barker:  How are you doing? Rocky Kramer:  Pretty well. EB: You down ...

Norwegian rocker Rocky Kramer is celebrating his USA citizenship after making his home in California. As a child prodigy Rocky learned the violin at age 3 and went on to master many other instrumen…

The Star-Spangled Banner by Rocky Kramer

The Star-Spangled Banner by Rocky Kramer

Rocky Kramer performs a rockin' version of The Star-Spangled Banner in honor of becoming a U.S. citizen on March 4th, making him a true Norwegian-American.Th...

When I first started playing acoustic guitar, “Babe, I’m Gonna Leave You” was one of the first songs I wanted to learn. I loved the dynamics and how Page’s a...

"Rocky Kramer will be hosting a new Rock & Roll Tuesdays Show on February 2nd, 2021 at 7 PM PT on Twitch. Tuesday’s theme is “The Origins of Heavy Metal.”

"Rocky Kramer is a guitar virtuoso, often being compared to the greatest guitar players in the world. Rocky recently performed at the SohoJohnny Let Me Help Inc/ benefit concert along with some of the greatest musicians on the planet including Ozzy Osbourne, John Lodge, Steve Vai, Leland Sklar, Kenny Aronoff, Tommy James, Verdeen White, Ten Years After and Rick Wakeman.

Rocky Kramer will be hosting a new Rock & Roll Tuesdays Show on February 2nd, 2021 at 7 PM PT on Twitch. Tuesday’s theme is “The Origins of Heavy Metal.”  Rocky Kramer is a guitar virtuoso, often being compared to the greatest guitar players in the world. Rocky recently performed at the SohoJ...

I'm taking one last look at 2020 before I kiss it goodbye forever, ever, ever!
Rock & Roll Tuesdays: Jan 19 - 7 PM PT
Twitch.tv/rockykramer

This is a great article about Allied Artists Music Group that just came out yesterday:
http://thehollywooddigest.com/whats-old-may-be-new-again-allied-artists-music-group-is-rebuilding-an-old-and-familiar-brand-in-a-digital-age/

By Don Peterson January 11, 2021 4:43 pm Within the ever-changing business of music rests the usual suspects, Universal Music Group, Sony Music Entertainment and Warner Music Group or “The Big Three,” as they’re known today. Each are household names that account for the vast majority of what...

Rock & Roll Tuesdays is back, Jan 12th!
Twitch.tv/rockykramer
Let's talk 2021! I want to hear your thoughts, predictions and New Year's resolutions. It's time to rock in the New Year!
Photo: Mark Maryanovich.

Happy New Year everyone! Let's make 2021 the year we emerge from this horrible pandemic!

One of the strongest and most poignant guitarists since Hendrix comes in the form of sophisticated and driving artisan, Rocky Kramer. A musical virtuoso on the violin at age five, Rocky knows “for once a thing is known, it can’t be unknown.” Although a brilliant multi-instrumentalist, Rocky sh...

It's Time for Shots & Rocky Kramer

It's Time for Shots & Rocky Kramer

Ric Chetter talks about all sorts of things From Radioland.

Rocky Kramer performs Alcohol and Rock Star live, for the Let Me Help Benefit Concert on November 24th, 2020. Other musicians at the event include Steve Vai,... 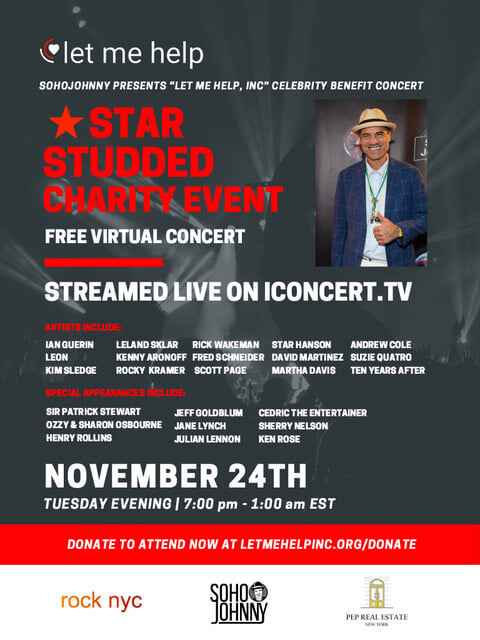 Soho Johnny and the Let Me Help Foundation joyfully presents the Let Me Help Celebrity Benefit Concert, a virtual musical celebration benefitting those shattered by the devastation of COVID-19. The evening will be a dazzling 6 hour star-studded array of the biggest and most dazzling celebrities and opulent icons!

I want you!!! To vote (if you're American) and watch Rock & Roll Tuesdays tonight at 7 PM PT!
Twitch.tv/rockykramer

I can thank Yngwie Malmsteen for helping me take my guitar playing to the next level. I discovered his music as a teenager, when I fell off my bike at the ag...

The guitar king of Norway Rocky Kramer talks about his recent album “Firestorm” (by Allied Artists Music Group) plus his upbringing in a unique musical famil...

I'll be on The Jimmy Star Show with Ron Russell this Wednesday, so mark your calendars!

Be the first to know and let us send you an email when Allied Artists posts news and promotions. Your email address will not be used for any other purpose, and you can unsubscribe at any time.

Send a message to Allied Artists:

"A Magical Mystery Tour" is the story of Trevor Hampton's infatuation with The Beatles, taking him on a wild, unpredictable ride, as he adopts a new Beatlemania identity. Driven to escape from a tumultuous relationship with his father, his Beatle obsession rips apart his already dysfunctional family and derails his pursuit of true love. Can he end his 'magical mystery tour' and face reality? For more information visit: http://magicalmysterytourmovie.com and http://alliedartists.com

Invasion Of The Body Snatchers - Trailer

Held by the police as a raving lunatic, Dr. Miles Bennell recounts to a psychiatrist the events that have turned his life upside down. He returned to his small town the previous Thursday, having been called back from a medical conference by his nurse, who was being flooded with patients. He arrives to find that most have canceled their appointments, but the few cases he does have all have the same story: someone close to them is acting strangely as if they had been replaced. Consulting some of his colleagues, he finds that these types of reports have been coming in all week and they conclude it must be some type of mass hysteria. However, when his friends Jack and Teddy Belicec show him a partly formed body they have uncovered in their home, he begins to realize that there may be some truth to the wild stories he has been hearing. For more information: http://alliedartists.com Clip Courtesy: Allied Artists Pictures Directed by Don Siegel Writers Screenplay Daniel Mainwaring Collier's magazine serial Jack Finney Richard Collins Uncredited Cast - in credits order (verified as complete) Kevin McCarthy ... Dr. Miles J. Bennell Dana Wynter ... Becky Driscoll Larry Gates ... Dr. Dan 'Danny' Kauffman King Donovan ... Jack Belicec Carolyn Jones ... Theodora 'Teddy' Belicec Jean Willes ... Nurse Sally Withers Ralph Dumke ... Police Chief Nick Grivett Virginia Christine ... Wilma Lentz Tom Fadden ... Uncle Ira Lentz Kenneth Patterson ... Stanley Driscoll Guy Way ... Officer Sam Janzek Eileen Stevens ... Anne Grimaldi Beatrice Maude ... Grandma Grimaldi Jean Andren ... Eleda Lentz Bobby Clark ... Jimmy Grimaldi Everett Glass ... Dr. Ed Pursey Dabbs Greer ... Mac Lomax Pat O'Malley ... Baggage man Guy Rennie ... Restaurant owner Marie Selland ... Martha Lomax Sam Peckinpah ... Charlie (meter reader) Harry J. Vejar ... Pod carrier in Miles' office Other credited cast listed alphabetically Whit Bissell ... Dr. Hill

Attack of the 50 Foot Woman is a 1958 American science fiction feature film produced by Bernard Woolner for Allied Artists Pictures. It was directed by Nathan H. Juran (credited as Nathan Hertz) from a screenplay by Mark Hanna, and starred Allison Hayes, William Hudson and Yvette Vickers. The original music score was composed by Ronald Stein. The film was a take on other movies that had also featured size-changing humans, namely The Amazing Colossal Man and The Incredible Shrinking Man, but substituting a woman as the protagonist. The story concerns the plight of Nancy Archer, a wealthy heiress whose close encounter with an enormous alien being causes her to grow into a giantess. She uses her new size and power to seek revenge against her philandering husband Harry and his mistress, Honey Parker. A TV Announcer (Dale Tate) tells of people around the globe spotting a floating red ball. Nancy Archer (Allison Hayes) is a wealthy but highly troubled woman. She's speeding along the desert roads at night, fleeing her problems. A glowing ball settles on the highway in front of her. A giant reaches for her, but she runs back to town. No one believes in her story because of her drinking problem and having been institutionalized before. Her shifty husband (William Hudson) is more interested in his floozy (Yvette Vickers). Nonetheless, he pretends to be the good husband in hopes that Nancy will 'snap' and return to the 'booby hatch'. She convinces him to search the desert with her, looking for the "satellite". Eventually, they find it, and as the giant emerges Harry flees, leaving Nancy behind. Later, Nancy is found on the roof of her pool house. She's sedated by her doctor. Harry thinks to give her a lethal injection of sedative, but when he goes up to her room, he finds she's grown into a giant. The sheriff and Nancy's Butler find and explore the alien's spherical ship. Seems the giant alien needs diamonds, perhaps fuel. The giant alien interrupts, wrecking their car, so t

"Rocky Kramer will be hosting a new Rock & Roll Tuesdays Show on February 2nd, 2021 at 7 PM PT on Twitch. Tuesday’s theme is “The Origins of Heavy Metal.”

"Rocky Kramer is a guitar virtuoso, often being compared to the greatest guitar players in the world. Rocky recently performed at the SohoJohnny Let Me Help Inc/ benefit concert along with some of the greatest musicians on the planet including Ozzy Osbourne, John Lodge, Steve Vai, Leland Sklar, Kenny Aronoff, Tommy James, Verdeen White, Ten Years After and Rick Wakeman.