Photo stories about New York City breweries, plus articles and information that inform them. Follow along on Instagram, @brewview_nyc 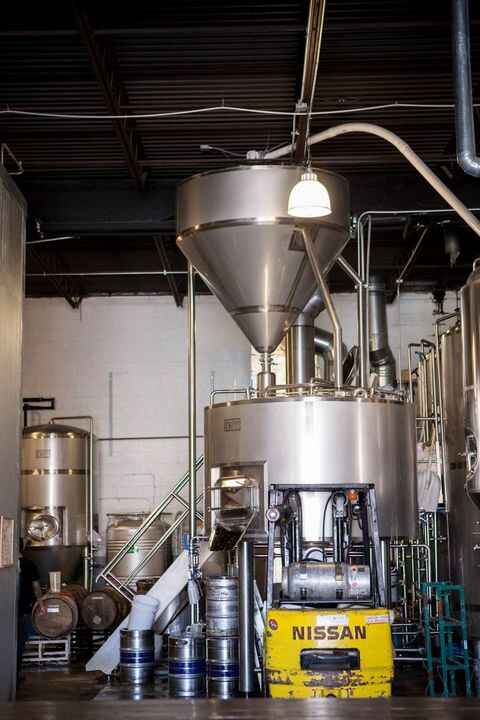 Have you heard of Kentucky Common? According to an article from PUNCH, this style of beer is making a comeback: http://punchdrink.com/articles/whatever-happened-to-kentucky-common-beer/

We had the opportunity to taste a Kentucky Common on our recent visit to Gun Hill Brewing Company. This is Head Brewer Chris Prout's take on the pre-Prohibition style, which is one of the few indigenous American beer styles along with California Common and Cream Ale.

The beer, in its day, may have taken on several different flavor profiles (historical documentation is limited) but it is largely thought to be a tart, malty beer, aged in bourbon barrels.

Originally, the tart flavors may have come from whatever wild yeasts and bacteria were hiding in the barrels. To create a similar flavor profile, Brewer Chris Prout kettle sours the beer, pitches a regular ale yeast strain in the fermenter, and then moves it to barrels to age.

Saison, traditionally, was a generic style of beer brewed seasonally in Belgian. Before the advent of refrigeration, it was brewed in the cooler winter months and rationed to farm workers in the summer months. Today, Saisons are much more similar in style to each other than they were back then. Most are pale/golden in color, fruity, spicy, and typically brewed with a Belgian or French Saison yeast strain.

In collaboration with other breweries around the country, Allagash Brewing Company is hosting a series of Saison Day events this Saturday, April 8th. In NYC, the event will take place at Threes Brewing. Check out more information about the event here: Saison Day with Threes Brewing

We are heading to Threes Brewery in a few days and will update with more information about them then.

Construction at Fifth Hammer Brewing Company is well underway in Long Island City. Owners Chris Cuzme and David Scharfstein obtained the space in August, started buildout mid-December and even have their shiny new tanks in! If all goes according to plan, they will open for business next month. Here are a few behind-the-scenes shots of construction.

LIC Beer Project is currently only brewery in New York City with a coolship, though the number of coolships in U.S. breweries is on the rise. Check out this informative article from CraftBeer.com if you're curious what other U.S. breweries have been experimenting with - https://www.craftbeer.com/craft-beer-muses/coolships-old-new-american-craft-brewing).

If you are unfamiliar, brewing with a coolship is a very old, traditional method of making beer, before the invention of modern technologies to control brewing temperatures and fermentation. The coolship itself is a large, shallow vessel into which the wort is transferred to cool. While it cools, the wort also collects any wild yeast or bacteria naturally occurring in the environment. This process is called spontaneous fermentation; the beer is only being fermented with naturally-occurring microflora, not inoculated with traditional brewers yeasts.

These microflora often create tart flavors, hence these beers fall into the American category of "sour" beer (see previous post regarding this). In Belgium, beers brewed with this method are called lambics, but American brewers do not use that term as lambics are specific to that region. Often, the term "spontaneous fermentation" or "coolship" ale is used.

The process is scientific to a point: LIC Beer Project has found that it's best to brew when the temperature is in the 20s, 30s, or low 40s. Not only does is this necessary for cooling the wort, the types of microflora ideal for brewing exist at these temperatures. The microflora found in the air at higher temperatures are more likely to create off-flavors. As you can imagine with anything "spontaneous," the outcomes are also, to some extent, at the mercy of chance. No two batches will turn out the same, and some will be more successful than others.

LIC Beer Project ages their coolship beers in barrels for a minimum 2 years before releasing them, so the first in their Dulcinea series only recently became available to the public. (Note: LIC Beer Project just opened 1.5 years ago but started brewing with their coolship 6 months prior.) Dulcinea '16 was the first. Next year it will be Dulcinea '17, and Dulcinea '18 the year after that. Traditionally Belgian brewers will also blend different vintages of their lambics. These are called gueuzes, typically a blend of 1, 2 and 3 year lambics. LIC Beer Project plans to do something similar once they are old enough to have enough vintages to play with.

In their brewhouse, LIC Beer Project currently has 200 barrels, all filled with their coolship beers. Eventually they hope to expand and have a separate space for their sour program.

Here are a few more images from our recent visit with Merlin and Mimi of Wartega Brewing in Industry City.

Wartega Brewing is one of NYC's newest breweries. They are operating out of the Industry City Distillery taproom along with Lineup Brewing and Arcane Distilling--which is amazing because they all share the beautiful taproom overlooking lower Manhattan. I posted about this once before when I visited Brewer/owner Katarina at Lineup, but here are a couple of images of the space. Wartega is already selling beers out of the taproom on weekends, but the official Wartega Grand Opening is happening on Friday, March 31st.

In case you missed the Instagram posts (https://www.instagram.com/brewview_nyc/), here are a few images from our visit to Transmitter Brewing in Long Island City. 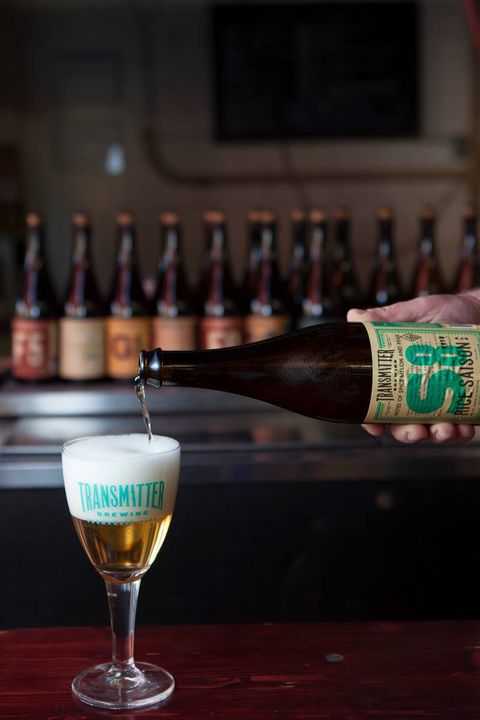 Transmitter Brewing bottle conditions their beers, so the beers change over time. If you're not familiar with this term, it means they bottle with yeast. This yeast will continue to ferment any remaining sugars/added sugars, and the beer will evolve over time. Typically breweries who employ this method will let their beer begin to referment in bottles for a period of time before releasing them to consumers.

It is important to note that hoppy beers do not age well, but that is a small slice of what Transmitter brews. How much aging is ideal for their other styles varies beer to beer. Here is a quick reference article about bottle conditioning from Craft Beer and Brewing if you'd like to read more: https://beerandbrewing.com/dictionary/iKSxvCoDdk/bottle-conditioning/

Transmitter hasn't been around long enough to have very old bottles in their cellar, but owners Anthony Accardi and Rob Kolb homebrewed for years before opening the brewery together. Anthony says that he has 20 year homebrews that he has successfully opened and enjoyed.

Greenpoint Beer & Ale Co. is turning 3 and they are celebrating tomorrow afternoon with FREE BEER from 2 to 4p. Here are a few photos from our recent visit. As always, check out our Instagram for more (https://www.instagram.com/brewview_nyc/)!

Here are a few more photos from our afternoon at Keg & Lantern Brewing Company in Greenpoint.

"Sour" beer is an increasingly popular style of beer in the U.S., but this is a general term used to describe any beer with a tart flavor. Some brewers reject using it, while others like The Rare Barrel--whose mission is to study the world of mixed fermentation, barrel-aged ales--have embraced it as their tagline, "A Sour Beer Co."

Under the large and vague umbrella of "sour" beer, you'll find traditional Belgian lambics, gueuzes (a blended lambic), and Flanders ales. You'll also find Berliner Weisses and Goses from Germany. And, because many of the traditional beers brewed in these regions cannot be truly replicated elsewhere, you'll find American versions of the above, plus more.

Brewing method for each of these styles ranges widely. While we won't get into specifics here, traditional Belgian "sours" not only require delicate balances of yeast and bacteria, they also must age in barrels, and end up taking months or years to produce. The traditional German can be made much quicker as can even be kettle soured. If you're not familiar with this term, here is a quick article about the process of kettle souring from All About Beer Magazine and how it is aiding the current "sour" trend: http://allaboutbeer.com/kettle-souring/

For a quick and dirty outline of some traditional sour beers styles, check out this Lucky Peach article: http://luckypeach.com/guides/guide-sour-beers/.

What we're excited about, however, is the fact that American craft brewers have thrived through experimentation, taking traditional ingredients, methods, and styles and making unique beers of their own. Especially with many traditional "sours" not coming with recipes (they are buried in centuries old family secrets and the subject to the terroir from which they hail), this leaves the door wide open for our brewers to learn from experimentation and sharing.

We were talking with the brewers at Keg & Lantern Brewing Company this week. They are already doing some kettle souring, and recently ordered a Belgian yeast/bacteria blend (pictured below). Be sure to follow them for updates as they dive a little further into the world of sour beer. 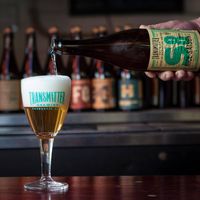 Check out images from Rockaway Brewing Co.'s Long Island City location on our Instagram account (https://www.instagram.com/brewview_nyc/). We have yet to check out their Rockaway location that opened last summer, but blizzards in the forecast tomorrow have us dreaming of beaches and warmer weather. You can see a few shots of their Rockaway taproom via Gothamist here: http://gothamist.com/2016/06/28/rockaway_beer_garden.php. It is only open 4 days a week now, but will be open 7 this summer.

How Women Brewsters Saved the World

Did you know that women were the original brewers? The first evidence we have of barley beer is from Mesopotamia as early as 3500 BCE, although other fermented beverages date back even earlier. Because brewing beer was a household task, it fell under the jurisdiction of women. It wasn't until the start of commercial brewing that it became a male dominated field. Numbers of women in brewing today are significantly lower than men, though this is slowly improving. Lineup Brewing--who we recently featured on Instagram--is the first solely female owned and operated brewery in New York City and we are so happy to support them. If you're curious to learn more about the history of women in brewing, here iss an informative article from the Pink Boots Society's blog: https://beerandbrewing.com/VNN4oCYAAGdLRZ-I/article/how-women-brewsters-saved-the-world

Tara Nurin (official historian of the Pink Boots Society) explores the history of women and beer from prehistoric times up through Prohibition.

Be the first to know and let us send you an email when BrewView NYC posts news and promotions. Your email address will not be used for any other purpose, and you can unsubscribe at any time.