A film festival that is dedicated to screening exciting and innovative films as a means to spark conversation and further understanding of the experiences of others. Our thriving Youth Initiative, public screenings in alternative spaces, community building and multi-media events support and develop filmmakers and film lovers. For us, it's not a good thing unless it's a good thing for everyone.

It's alllllll in Queens, yo!
Queens, New York

Be My Oswald - A twisted Christmas tale about a myth and the woman who wants to take it down.

Happy Ho Ho Ho indeed. Something from the...interesting...mind of Don Preston Cato: Be My Oswald, a twisted holiday tale.

Two of our incredible 2022 Festival Associates who give their time to make our festival a good experience for everyone are hosting a screening of their film. One Way In No Way Out
Congratulations Malcolm Boyd and Sandra Bilu!
Details here: https://www.eventbrite.com/e/private-vip-film-screening-tickets-482826997547

Idiocracy is here. And we are all staring in it…though.

From our good friends at Filmshop!
Want to win a prize or two or three?! Then head to Filmshop's annual Giving Season raffle for the opportunity to win an array of prizes, such as two tickets to see "Beetlejuice" on Broadway ($600 value), a professional headshot photoshoot and more!

When the scores are final and the minutes have run out, we are good with your joy and your sorrow. When the last theatre is darkened, when the last load is brought home, it is ok to feel the feels. It is ok to leave it all on the field, even your tears. To push beyond yourself into that place where the event becomes what was imagined....to push that hard and to bring your best is something I hope everyone has the chance to experience.

Join the Board of Queens World Film Festival as we make the last call to watch films for the 12th Annual QWFF. Watch films online as part of our virtual addition to the Queens World at https://filmfestivalflix.com/festival/qwff/#.Y4vulCU8KEf

Queens Live at 8. - Featuring Film Maker Anthony Curry and some of the Cast & Crew of Feature Length Film "TRAP"

In November 2022 the 12th Annual Queens World Film Festival Honored five Remarkable Woman: Taryn Sacramone, Executive Director of Queens Theatre and the Chair of the Cultural Institutions Group; Sade Lythcott, Chief Executive Officer of the National Black Theatre and Chair of the Coalition of Theatres of Color; Lucy Sexton, Executive Director of New Yorkers for Culture & Arts), Ellen Kodadek, Executive and Artistic Director of Flushing Town Hall & Sandra Schulberg, President of IndieCollect. This was done with the help of Anne del Castillo is Commissioner of the NYC Mayor's Office of Media and Entertainment (MOME), and streamed live by Marya Kazmi, CEO of Brown Girl Interrupting LLC,

Keep on top of everything happening at Film Festival Flix. Complete the form below and we'll fill you in whenever we have news to share about upcoming festivals on our platform. Thanks for supporting us and the festivals that we champion.

The Queens World Film Festival is joined by Behrad Sahebgharani & Two Producers of "BACK INTO YOUR ARMS" official selection of QWFF 2022
https://queensworldfilmfestival.org/films/back-into-your-arms/

This looks great and we are pleased to announce that one of our wonderful alumni recommends it highly. And of course, you know how we feel about Flushing Town Hall!!! https://www.flushingtownhall.org/event-detail.php?id=326&fbclid=IwAR2MlSJb1vZ6nsExfzO6oxRtiRgGSSN80n4xLBSCwh8JSel7g6tf53DRRBg

Join us at Flushing Town Hall for a free, live concert performance of Illegal: A New Musical, with its professional all-AAPI New York cast! Despite the constant shelling and blackouts, we continue to hold the cultural front!
We are pleased to announce another success: our film "There is Hope" has been selected for the virtual part of the World Film Festival (New York, USA).
The film is presented in the category
"What is Going ON?”
Short films that shake things up" - https://filmfestivalflix.com/festival/qwff/film/there-is-hope/

Screenings will take place from November 20 to December 4 at https://bit.ly/QWFF2022

Tickets can be purchased at the link - https://bit.ly/QWFF2022tickets

We thank Queens World Film Festival for the opportunity to be seen and heard!!!

These people. These artists.

Meet rising star, award winning (QWFF 2022 Outstanding Actor Award) child actor Nicolas Calero, who plays George in the film "The Game". This film is part of the QWFF 2022 line up and is available to watch online for our Virtual Festival here: https://filmfestivalflix.com/festival/qwff/film/the-game/

The sun, the garden and a tiny patch of blue blue sky.

7 picks a week: Be dazzled by fashion, catch a cellist in motion, and hear a new opera before opening night

It’s impossible to keep up with everything happening in New York City arts and culture, but here are some recommendations for events you shouldn’t miss during the week ahead.

So nice when great work gets recognized. Congratulations to Marc Acito. Remember you can see this award winning film Mad / Woman in our virtual festival on Film Festival Flix in the Best of the Fest: Shorts Carousel from November 20 - Dec. 4. Go there now, create your account, check out the carousels, make your selections. Bring the world home and be ready to be moved!

Writer-Director Marc Acito’s big gamble paid off at the Queens World Film Festival. The festival recognized Acito as “Outstanding Director of a Narrative Short,” and then festival’s directors Katha…

After the blockbuster response to the live festival here in Queens we are now getting geared up to take this festival WORLDWIDE and It’s just about to begin!!! The virtual leg of the 12th annual queens world film festival runs from NOV 20 - DEC 4 exclusively on www.filmfestivalflix.com where the whole world can enjoy this years lineup of films from anywhere on any device ONLINE. Ticket pre-sales have started, we suggest to get the full season pass so you can see as many films as many times as you wish within this period in one single pass (also cuz it’s heavily discounted). GO GET THOSE POPCORN TUBS OUT, CALL ALL YOUR BESTIES AND MAKE YOUR OWN MOVIE NIGHTS EACH NIGHT AND SIMPLY BINGE WATCH!!! WORLD here come QUEENS WORLD FILM FESTIVAL 2022

This week has made us laugh, cry, think, and so much more, it is nothing close to what or how we were a week before, celebrating this week, the works, and all that we are and will be here on.

Come cheer the 2022 filmmakers, cast, and crew as we raise a closing toast to this year's live festival and announce details of the virtual leg of the festival that starts from Nov 20 - Dec 4.

See you all in Queens!

Get all details and book your tickets here: https://queensworldfilmfestival.org/special-events/

It’s a WRAP!!!! Big thank you to everyone who participated, the filmmakers, festival associates, board members, partners, queens community, board members, jury, audiences, media, press, the 5 venues, Flushing Town Hall, Queens Theatre, MoMI, The Local, Kaufman Astoria Studios, Indiefilmsworld, all hospitality partners, all hotel partners, all the festival cheer leaders, filmfestivalflix, and every one who contributed to our mission “THE FILMS”

Get all details and book your tickets here: https://queensworldfilmfestival.org/special-events/

Be the first to know and let us send you an email when Queens World Film Festival posts news and promotions. Your email address will not be used for any other purpose, and you can unsubscribe at any time.

Join us as we celebrate woman at the 12th Annual Queens World Film Festival !

Opening Night Queens Theatre 📽you should be here ‼️

What a wonderful day! To be able to present $8,000 to NYC Health + Hospitals at #elmhursthospitalcenter was an honor and a thrill with Daniel Dromm blk. beverages and Film Festival Flix. 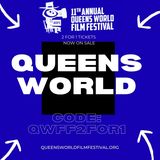 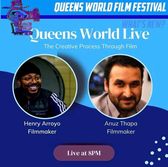 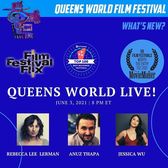 Kicking off Queens World 11 at the Unisphere in Corona Park! 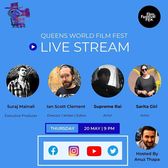 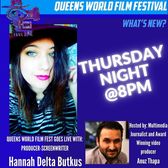 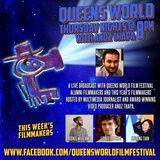 MARCELLUS COX TELLS US WHAT GIVES HIM HOPE.

HOPE is for everyone

Three From The Heart 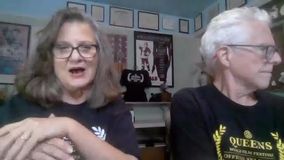 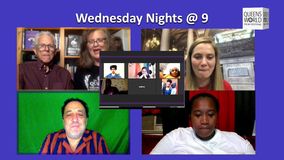 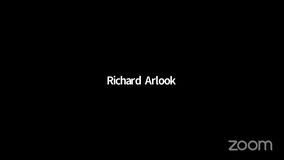 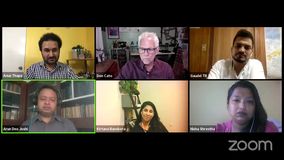 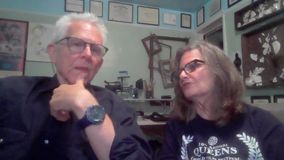 Although I don’t remember the exact date, I will never forget stumbling upon an article describing the activating philosophy of Colin Wilson, which stopped him in his tracks as he was about to attempt su***de when he was a teenager. His epiphany became my epiphany: Live as if at any moment you may get the 'absurd good news.'

When the pandemic began taking a toll on the entire globe, myself included, Wilson's quote inspired me from head to toe like it has many times, allowing me to summon hope that allowed me to glimpse what is possible when we shift our mindset and dig deeper to see a new perspective.

If you're in need of a little hope, treat yourself to Judith and Friends, a short film directed by artist Judith Modrak that is currently a part of the Queens World Film Festival Listening Tour in partnership with the Queens Museum.

I'll drop a link in the comments below.

Dr. Melina Jampolis, our Chief Nutrition Officer, spoke on behalf of blk. and signed copies of her newly released book, Spice Up, Live Long: A guide to using herbs and spices to live a longer, healthier and more vibrant life.
Almost two years after its official premiere, 𝗧𝗵𝗲 𝗜𝗻𝘃𝗶𝘀𝗶𝗯𝗹𝗲 𝗠𝗼𝗻𝘀𝘁𝗲𝗿 film continues to raise awareness on hunger and poverty as it receives more global recognition this year.

The film had won at the 2021 Rhode Island International Film Festival, making it one of the festival’s nominees for The Academy Awards consideration!

It was also awarded at this year's Festival Internacional de Cine de Sax and Queens World Film Festival. A huge congratulations to Directors Javier Fesser & Guillermo Fesser, and Peliculas Pendelton on these achievements!

is a 32-minute film shot in post-conflict Marawi City, with actual residents starring as actors. While the film depicts a story of hope and happiness amidst hardships, interconnected systemic issues must be addressed in order to end the cycle of hunger.

We are so excited to announce that we won the audience award for documentary feature at the the Queens World Film Festival. Thank you again to everyone who came out to support us, and to Katha Cato, Don Cato, and the staff of the festival and the Queens Theatre. We have some exciting things coming up in the months ahead and can’t wait to share with you all. You can go to our website www.walkwithfrankfilm.com and sign up for our mailing list for updates. This is just the beginning!

Frank Romeo Matt Mayers Richard Chisolm Ryan Mayers
On red carpet in hollywood international film festivals shining globe here's the U.S hollywoodi world Artist aka# American Actor wael saleeb ElAmericany
Thanks Queens World Film Festival and Ken Brown for these incredible pics from our premiere!
We are honored to be recognized by the Queens World Film Festival founders. This award is special to us 🙏 Thank you for the acknowledgment and for a great screening!
📹 BANDE-ANNONCE 📹

-- Location réservée aux associations (loi 1901) adhérentes au parc de matériel associatif de Pictanovo et domiciliées dans la Région Hauts-de-France --
Happy 4th of July! As you celebrate, remember the men and women who fought for our freedom and all of the survivors who struggle with post trauma. We know that not everyone was able to make it to the premiere last week at the Queens World Film Festival, so over this holiday weekend and extending through July 11th we'd like to offer you the opportunity to see our film in a limited special event. Click the link below for details about the film and the live Q&A on Sunday July 11th from 1-4 pm ET. It's important to make mental health a common conversation, and we hope that you will join us!