Your link to sports history, one photo at a time

The Case for the 12-foot Basket

In 1967, SI staged a basketball game on 12-foot baskets to see if it would help take away the advantage held by taller players.

On this day 20 years ago, Michael Johnson shattered the 200-meter world record. In this 1996 magazine story, he looks back on the historic day.

'I am rarely shocked by my own performance,' Michael Johnson says as he looks back on his record-shattering 200-meter run. 'And I'm shocked.'

Bo Jackson and Jim Kelly each appeared on SI Covers in July 1986.

Peyton Manning turns 40 today. Hard to believe he was once competing against Ryan Leaf for No. 1 overall pick in NFL Draft.

Peyton Manning and Ryan Leaf are the class of the 1998 NFL draft, but experts say one of them stands head and shoulder pads above the other Oklahoma forward Blake Griffin is a skilled mimic and practical joker off the court, but on it the sophomore double-double machine does a pretty good player-of-the-year impersonation

And Now for My Reappearing Act

From March 9, 1981:
Magic Johnson has returned to the Lakers after a knee injury caused him to vanish for 100 days.

Did you know Ronda Rousey was featured in 2001 as part of Sports Illustrated's Faces in the Crowd?

There aren't a lot of photos of Kobe Bryant in Celtics green but this shot from a 1996 pre-draft workout is one of them.

Putting Peyton in His Place

SI Vault (9/22/97): Florida coach Steve Spurrier has been zinging Tennessee’s Peyton Manning with his one-liners and what the Gators may well do to him on Saturday.

Allen Iverson steps over Tyronn Lue after making a basket in Game 1 of the 2001 NBA Finals. (Otto Greule Jr./Getty Images)

Pop the champagne! The SI Vault page is back! Expect mucho pics during the week and a few treats throughout the weekend (such as this shot of Pete Rose posing for SI’s 1975 Sportsman of the Year cover).

SI photographer John Zimmerman captures the sweet swing of Ted Williams in this 1968 photo. “The Splendid Splinter,” who retired with a .344 lifetime average, made 19 all-star teams in his 21-year career. (John G. Zimmerman/SI)

Kevin Garnett and Peyton Manning jokingly refuse to look at each other during a 2009 Wheaties event. (AP)

Bill Buckner poses during Red Sox Photo Day in 1986. Little did he know the horror that awaited him a few months later. (AP)

Today marks the 50th anniversary of Wilt Chamberlain's 100-point game. This photo is of Wilt in his fourth grade class. Can you guess which one he is? (SI Photo Collection)

For the soccer fan (who has to pee) in your life. (REUTERS) 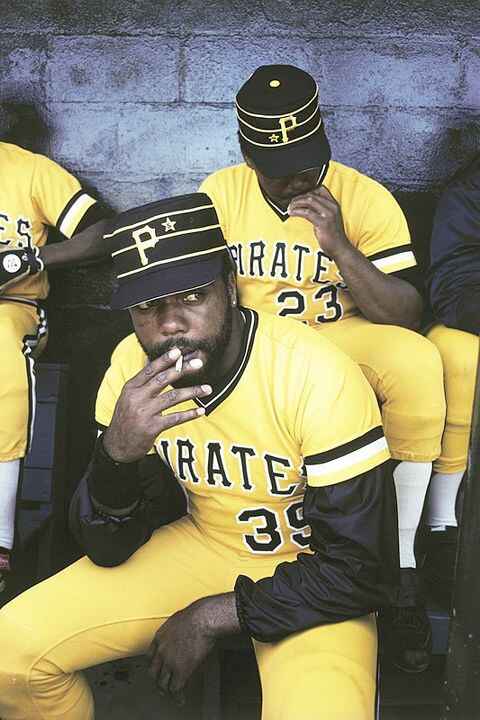 This is what the University of Maryland cheerleaders looked like in 1950. (Getty Images)

Charles Barkley, who turns 49 today, gets ready to make a move on Larry Bird during a 1989 Celtics-76ers game. (Getty Images)

Be the first to know and let us send you an email when SI Vault posts news and promotions. Your email address will not be used for any other purpose, and you can unsubscribe at any time.

Send a message to SI Vault:

Loving this blast from the past
Hi, I'm wondering if you have any more information on this cover. Thank you
If you have an interest, you will note the same men sitting for the national anthem often think with something other than their brain. Of particular note: 1. Divorce rate for pro athletes? Between 60-80% 2. Children? Try nine kids by nine women, seven kids by five women, five kids by three women, and more. 3. Investments? One guy had 18 cars when he declared bankruptcy, with notes on 17 of them. 4. Financial advice? My cousin's friend - he is an accountant. These are your role models.
A great article from a few years ago that all Cardinal fans will appreciate!
I have 7 sports novels in pdf files I can email you. C.F.
Grossly sexist article from the 1080's.....
An article from 1975 on HS game film. 42 years later it's all about Hudl and YouTube... "Across the country, pickups and deliveries are made at police stations, garages, drugstores and diners. Film turned over to a processor on Friday night is back by Saturday morning, film of Saturday afternoon games by dawn Sunday. It seems coaches can't wait to prepare for next week's game. They rely on the films to spotlight player errors—and perhaps their own. As they say, "the Big Eye don't lie." But Bob Stuart, coach at Eastmoor High in Columbus, Ohio, believes there is more to it than that. "Game films are certainly excellent for scouting now that we all trade," he says, "but in the back of our minds is the help it will be in sending our youngsters to college. That's the big thing. It gives us an opportunity to showcase our players and it broadens their opportunities." Last season Atlanta appropriated $8,500 to film high school football, and 105 students won athletic scholarships. "We got $400,000 in football scholarships for $8,500 worth of film," says R. A. Wainwright, the assistant city athletic director. "There is no question that we got our money's worth.""