Email or FB Message us for more info Guava Records is a unique space for musicians serious about making great records + beautiful videos.

@miettehope sharing her take on @beyonce ‘s “Halo” live at @guavarecords • “I like singing this song with the idea that everyone has a halo, they just have to show it. Maybe deep down every heart is good, and if we look hard enough we can find each others light shining through.” • Link in the bio • #miettehope #beyonce #halo #singer #acapella #guavarecords

This week’s release comes from our new friend @bymaddz ... Our first COVID era Live at @guavarecords session and with our new Yamaha U1 piano having been donated the day before. Joined by @quinndevlin , @bymaddz came in a laid down 5 amazing songs including this cover of @feliciathegoat “See You Again” •
•
from @bymaddz herself: “I flippin LOVE Tyler, The Creator. His music has influenced me to explore more avenues of singing and I love how passionate and visual that song is. I felt like it worked well with my voice”
•
• link is in the bio • enjoy! •
•
#guavarecords #tylerthecreator #bymaddz #singer #piano

Today’s release from from Laura Fisher @exactinverse ... in her own words: “@jamesblake is one of my favourite modern artists. I distinctly remember listening to him for the first time shortly after moving to New Orleans four and a half years ago — the band I was in at the time used to play Halo 4 to blow off steam after a long week, and our bassist would always mute the sound to put on some great new music for a soundtrack. One day he put on James Blake and the roof blew off my world. I can still see vague images of the game in my head shifting to his self-titled debut; a whirlwind of seafoam green, purple, many shades of blue, battle, landscape, minimalist sound sculpture and THAT VOICE... power. Longing. Seeing him live a few years later remains one of the best shows I’ve ever seen and ‘The Colour in Anything’ is one of my favourite records of all time. Blake is a brilliant songwriter, an innovative arranger & producer, and a soulful yet harrowing singer. I love that he is a force of electronic production yet equally strong when performing stripped down with just piano and vocals. I’d always wanted to cover a song of his and at the time of doing this live session at @guavarecords, ‘My Willing Heart’ was a favourite. To me it’s a love song of initial connectivity, arcing desire, and obsessive missing.... both traditionally painted and with a tinge of stark modernity as well (“every now and then - you’re still on my screen”). The subject couldn’t be more relevant than it is now during a global pandemic in which everyone and everything is so near yet so far, simultaneously, constantly. Big shout out to @jeremydmarx for helping me to dissect the chord structure and create an incredibly fun/satisfying piano arrangement. And thanks to @darrenhoffman for having me in the old Brooklyn recording space. I’m thrilled to share this cover today! especially while finishing a second solo record largely centered around electronic production. Here’s a taste of stripped down piano and vocals to tide you over until then. Thxx for listening 🔉 hope you enjoy.”
•
•
#guavarecords #laurafisher #piano #vocals #brooklyn #jamesblake

Guava Records was founded on the principle of striving for equity and justice in the music industry. We are fundamentally anti-capitalist, anti-racist and pro-humanist.
•
Each record we make is created from a place of love. We are humbled to work with incredible artists. Meah Pace @meahpace is one such artist. We are honored to present her rendition of “Ain't Gonna Let Nobody Turn Me 'Round” from one of our earliest sessions in our original studio in Greenpoint Brooklyn, December 2017. Full video link in the bio.
•
Meah Pace is the renowned singer from dance/punk band "!!!" (Chk Chk Chk) and a featured singer in the Resistance Revival Chorus, a new group spearheaded by the organizers of the Women’s March. She is also a beloved presence on the Brooklyn soul scene through work with Binky Griptite's The Mellomatics, Rev. Vince Anderson's Love Choir and her own band, The MAP Legends.
•
#meahpace #singer #protestmusic #blm #guavarecords

The wonderful @geminelle is healing our hearts this Thursday with her rendition of “O-o-h Child” joined by guitarist @joe_hendrix ... This song was originally released in 1970 by Chicago soul family group Five Stairsteps with a message for our collective healing process. Full video linked in bio.
•
•
•
#Geminelle #TunnelVisionArtists #GeminelleLive #FollowTheMusic
#GuavaRecords
#BLM #BlackHealingMatters

Well certainly it's been a time. And it's been a minute since we've been releasing music regularly. As we slowly emerge from isolation, here's a song from @_chelseahines (written well before covid) that conveys just a bit about what a being alone feels like. And while we took a little break out of respect for the process that we've all been going through, Guava is getting back on the horse and will be steady rolling out more music soon.
.
.
#loneliness #alone
#voice #guitar #singersongwriter #guavarecords #liveatguava #guavanectar #guayaba #brooklyn #chelseahines

New release and #tbt with @albasmightylions covering Nina Simone’s "It Be's That Way Sometimes“... back in the day when social proximity was cool and we packed into the original @guavarecords in Brooklyn ... link in the bio for the full video. Stay safe y’all

This week we have Laura Fisher @exactinverse going in on some solo piano and voice with Radiohead’s pivotal “Pyramid Song” #liveatguava full video on YouTube, link in the bio #laurafisher #guavarecords #radiohead #pyramidsong #piano #voice #brooklyn

Here now is a fully acapella and live-looping Miette Hope covering the U2 classic “With Or Without You” ... live at Guava Records full-length YouTube version here: https://youtu.be/GPdaBdHWg_I ... very worth checking out the nuance and heart she delivers on this one.

This week, Meah Pace delivers the classic “We Shall Not Be Moved” #liveatguava in addition to her solo work, Meah is a featured vocalist for Resistance Revival Chorus and tours internationally with !!! (Chk Chk Chk) ... she is joined by @randyingram on #piano ... full video on YouTube: https://youtu.be/ZEf8rfOl58w

On this 21st day or January, the anniversary of Women’s March 2017, we present Nelini Stamp with her original protest anthem “The People Will Rise” | Nelini is an electoral organizer and creative. Co-founder of the Resistance Revival Chorus , director of strategy at the Working Families Party and rabble rouser in the streets. Watch the full video on YouTube here: https://youtu.be/LTpwJsBBU48

Be the first to know and let us send you an email when Guava Records posts news and promotions. Your email address will not be used for any other purpose, and you can unsubscribe at any time.

Send a message to Guava Records: 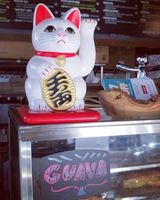 Guava Records
Are you looking for new artists to be on your label?
Norman Padmore
At Friends and Lovers May 27th
NEW VIDEO ALERT! Check out my cover of Beyoncé's "Party" !!! I recorded this and some more fun stuff at Guava Records a while ago, and I'm glad it's making its way to y'all. Let me know what you think! Happy Friday!
Guava Records is the only way to get your music heard!
I
GORGEOUS testing out the MEVO live stream at Guava Records