http://cargocollective.com/twoleaveseditions
Two Leaves is to serve as a vehicle for collaborations between creatives, executing their ideas by conceiving and creating books as visual experience.

TWO LEAVES EDITIONS. Founded in 2011 by Monika Bravo and Juan Luque, Two Leaves Editions' main purpose is to serve as a vehicle for collaborations between creatives, executing their ideas by conceiving and creating books as visual experience. Published in 2011, the first title, Between Two Worlds, is a journey into the depths of luscious and vivid aquatic canvases, featuring the photographs of Ric

TWO LEAVES EDITIONS. Founded in 2011 by Monika Bravo and Juan Luque, Two Leaves Editions' main purpose is to serve as a vehicle for collaborations between creatives, executing their ideas by conceiving and creating books as visual experience. Published in 2011, the first title, Between Two Worlds, is a journey into the depths of luscious and vivid aquatic canvases, featuring the photographs of Ric

today is a special day, more info tomorrow
I wanted to create a sense of presence...

Here is the short story for you, besides creating my artwork (a major MTA Arts & Design subway commission is opening in few weeks, stay tuned) I am offering an online innovative method based on my own methodology and practices, a workshop composed of three sessions where I pass on to you the ancient...

hello, friends! I am super excited because I am finally launching Studio of endless ideas, an online artistic community that I have been incubating for a while.   As a start, I organized The fields, an online drawing exhibition, where  I have asked fellow friends and colleagues to participate.

hello, peeps. on Friday at 6 pm, at #johannesvogtgallery, we will be having a conversation between Jean Shin, Robin Cembalest and me, we will be talking about my upcoming MTA arts design Commission and Jean Shin's recent celebrated 63rd street commission on the new Second ave subway line and the process entailed. please pass by! 6:30 pm

Thank you, Kristine Roome for reviewing my show at Johannes Vogt curated by Octavio Zaya!

super excited for the opening of my newest animations at Johannes Vogt gallery in NYC tonight
TESSERAE, curated by Octavio Zaya
show on view until Feb 26, 2017
photos: marijuliano

Arising from her ongoing research on color and rhythm, Monika Bravo’s new works place us in an abyss pulsing with vibrating waves of energy, where readability and meaning remain elusive. After Bergson’s understanding of time and his concept of duration --which differentiates between the time that we measure in intervals and the time of our experience--Bravo aims for an interconnected sense of unity between space and time through an understanding of our mind´s cognitive structure, which gives to formless reality both shape and meaning. Thus, the visual layers and cycles that dwell between those states of abstraction and their corresponding materiality are what Bravo´s work reveals to us and what we are supposed to experience through it.

Throughout her new installation, in the form of a mosaic of ideas, Bravo shows the gathering and editing of images through stitching, weaving, and compositing. Bravo also uses color to create a material contrast, a physical experience grounded in the circular duration of time in the piece. In the center of five monitors, three projectors, and sound, the viewer undergoes a hyper- rhythmic sensorial stimulation. In this activated state, on the one hand, Bravo is superimposing layers on LCD screens to help us enter into a new cognizance, where perception is mediated between what is real and what is virtual. On the other hand, another set of projections will be countering that experience: bursts of patterns of tiles, masked with Google image captures of Earth, will pulsate around the room as the silent beat of an imaginary musical score.

For Bravo, the skin --our skin-- is what translates these sensorial forms. For her, the body is the site where form and content develop an exchange, a dialogue, and where a balance between them is struck. Following this conceptual frame, the one who knows and understands the surface is the one who can experience the depths and the void. As Paul Valéry used to say, “the skin is the deepest thing there is.” But, at the same time, inspired by the mechanical and hallucinatory vision of a possible future where robots would see the world as a pixelated blur, Bravo uses technology to assemble a composite of pieces and particles--an animated puzzle of multiple and cracked realities--that allows the viewer to descend into a place where other possibilities --parallel realities and discoveries--exist.

Recently granted a commission by the MTA Arts & Design, Bravo has also begun to work with mosaics. After working many years with animations, projections, and installations, Bravo is now oscillating between ancient and contemporary technologies, between the eternal image on a wall and the fleeting projection on the screen, where a conversation of particles emerges between tesserae and pixels. Bravo is thus rewriting a new code between the two languages of weaving and mosaic-making, a code that connects together the elements of perception, illusion, time, technology, and the universal.
- Octavio Zaya
______________

Johannes Vogt is pleased to present "TESSERAE", the first solo show with the gallery by Colombian artist Monika Bravo. The exhibition features an immersive, room-spanning installation of animated videos presented on multiple monitors as well as projected onto the walls. This new body of work represe...

“Only in the darkness can you see the stars.” ― Martin Luther King Jr.

“Only in the darkness can you see the stars.” ― Martin Luther King Jr.

hey amigos in the global community, do you need a head shot? an animator? to photograph your artwork? a designer for your next book? a proofreader? a rendering for your next project? some interior design for your apt? you name it, although based in NYC, we offer a platform of worldwide referrals for all your creative needs, send email to [email protected] or just PM me... https://www.facebook.com/STUDIOofENDLESSIDEAS/

amigos & friends on facebook, the plan A was to launch the whole project at once, and this year of the jumping monkey, plans B, C or D are the ones that enhttps://www.facebook.com/#d up being implemented, please like my new endeavour's page, Studio of endless ideas,
https://www.facebook.com/STUDIOofENDLESSIDEAS/
At this point, we are offering (we as in a large community) a diverse number of services (as a part of the art production agency) locally and globally, do not hesitate to contact me, so I can explain how it works. In the next weeks, we will be announcing the other 3/4 complements of the new AGENCY!!!!!!!!
In nature, the five elements work together to create, the seasons, food etc, as a community lets support each other in a sustainable way, somehow we are all hurting one wy or another..

We are pleased to announce that Monika Bravo has joined the roster of represented artists at Johannes Vogt Gallery. Bravo is a multi-disciplinary artist and was born in Bogotá, Colombia, in 1964. She studied fashion design in Rome and Paris as well as photography in London and New York. She has bee...

We are pleased to announce that Monika Bravo has joined the roster of represented artists at Johannes Vogt Gallery. Bravo is a multi-disciplinary artist and was born in Bogotá, Colombia, in 1964. She studied fashion design in Rome and Paris as well as photography in London and New York. She has bee...

studies for musical notations at 67 ludlow

studies for musical notations at 67 ludlow

studies for Landscape of Belief, 2013 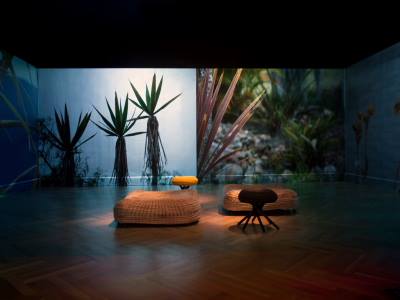 EFG Bank & ArtNexus are pleased to announce that the Latin American nominated artist for the acquisition award is Mónika Bravo, from Instituto de Vision, Bogotá Colombia.

The work was selected by Octavio Zaya Independent Curator, and Celia Sredni de Birbragher, Editor and Publisher of ArtNexus, at arteBA, Argentina.

After the group of five nominated artists is completed, the winner will be selected.

Video documentation from the exhibition at NC-arte in Bogota

Be the first to know and let us send you an email when TWO Leaves Editions posts news and promotions. Your email address will not be used for any other purpose, and you can unsubscribe at any time.