Welcome to the 7th edition of the New York
Peruvian Film & Art Showcase, a celebration of
our filmmaking and of the modern and ancient art
of Peru. This year’s program is a homage to the
precious metalwork and artistic jewelry of the
Peruvian pre-Hispanic and contemporary cultures. In 1987, in the deserts of North

Welcome to the 7th edition of the New York
Peruvian Film & Art Showcase, a celebration of
our filmmaking and of the modern and ancient art
of Peru. This year’s program is a homage to the
precious metalwork and artistic jewelry of the
Peruvian pre-Hispanic and contemporary cultures. In 1987, in the deserts of North

Today's program!
Q & A with the movie director Jonatan Relayze of Rosa Chumbe

Ester Ventura talking about her work.

The 7th #NYPFAS starts TOMORROW with the opening of Ester Ventura's exhibition which will be on display ALL WEEK at Instituto Cervantes' gallery. Join us and see for yourself the beauty of contemporary Peruvian metalwork. 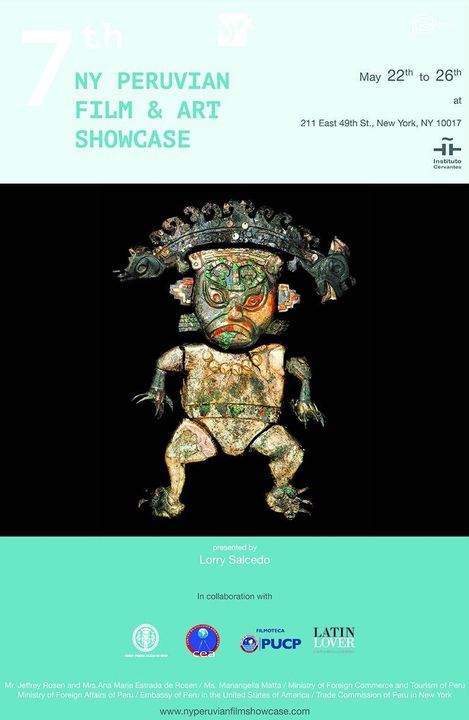 Embassy of Peru in the USA

New York (May 1, 2017) – The New York Peruvian Film and Art Showcase (NYPFAS) announces its programming for the celebration of its seventh edition, 2017. Through documentaries, short films, fiction feature films and art exhibitions, Peru’s ancient and modern art will be shown.

The exhibition returns to New York City for the seventh consecutive year, to be held from May 22 to 26 at Instituto Cervantes New York (211 E. 49th St.).The films selected to be screened are The Lord of Sipan, a documentary on the discovery of the tomb of a pre-Inca ruler from the Moche culture, whose significance is compared to the discovery of Tuthankamun’s tomb for the Egyptians; Magallanes, a feature film directed by the current Minister of Culture of Peru, Salvador del Solar, winner of the Films in Progress Award at the San Sebastian Film Festival and nominated for best Ibero-American picture at the Goya Awards; La Ultima Noticia, a feature film from director Alejandro Legaspi, a moving story about the effects of the actions of the Shining Path terrorist group on an Andean town; Rosa Chumbe, from young director Jonatan Relayze, a beautiful story illustrating a harsh reality in Lima, and winner of the First Films Competition prize awarded by the International Federation of Film Critics at the Montreal World Film Festival; Sarita Colonia, the documentary filmmaker Javier Ponce brings us this wonderful documentary after his successful debut in the world of documentary and El Ultimo Señor del Oceano, Modernity, and El Hueco, three short film winners at the Lima Film Festival. The Peruvian showcase will also exhibit in the Cervantes Institute Art Gallery “The Symbolic Mysteries of Adornment” about the influence of Peru’s ancient art on modern precious metalwork with the work of Ester Ventura, a great artist who takes us back to the glorious past of the Moche culture with her creations.

The seventh edition of the New York Peruvian Film & Art Showcase is directed and produced by the photographer and filmmaker, Lorry Salcedo, in collaboration with the Ministry of Foreign Relations and the Ministry of Foreign Trade and Tourism of Peru, the Embassy of Peru in the United States, the Commercial Office of Peru in New York, Marca Peru, Mr. Jeffrey Rosen and Mrs. Ana Maria Estrada de Rosen, Ms. Mariangella Matta, Centro de Estudios Americanos (CEA), and the film archive of the Pontifical Catholic University of Peru (PUCP Filmoteca), the Museum Tumbas Reales de Sipan and Latin Lover Magazine.

Today's schedule for the closing of the NY Peruvian Film & Art Showcase! (Admission with tickets only)

Susana Baca interviewed by Camilo Egaña- Encuentro//CNN
Can't miss "An Evening with Susana", tonight 6pm at the Instituto Cervantes NY
Get your tix;http://goo.gl/4Ezun6

This year we are thrilled and honored to present Latin Grammy Award winner SUSANA BACA as the highlight of our closing day. Not only will she present two documentaries on Afro-Peruvian music and culture along with her book "The Bitter Road to Sugar Cane", but she will also perform live for all our guests. Here is a beautiful sample of what you could witness next Friday! Buy your tickets for this day here: http://goo.gl/4Ezun6 [Entradas disponibles para el día viernes en el anterior enlace]

THE LITTLE FIREMEN (2014), a documentary directed by Quincy Perkins, will be featured next Thursday as part of the 6th New York Peruvian Film & Art Showcase. The director will also be available for a Q&A session after the screening. On the meantime, check out his kickstarter website to find more information about the film!

Deep in the Andes Mountains, in Peru, there is a treacherous stretch of road between Huánuco and Tingo Maria. Known as one of the most traveled and dangerous roads in South America, it sees hundreds of large shipping trucks every day. It certainly is not a road for the inexperienced or unprepared.

Trailer for GUARD DOG (Perro Guardián, 2014), directed by Daniel Higashionna and Baltazar Caravedo and starring Carlos Alcántara. It will be screened next Wednesday as part of the 6th New York Peruvian Film & Art Showcase! (Spanish with English subtitles)

A profile on VENANCIO SHINKI, one of our honorees at this year's New York Peruvian Film & Art Showcase. His paintings will be featured next week at the Instituto Cervantes gallery, and a documentary about him will be screened next Tuesday. [Perfil también disponible en español además del video]

You can find a sample of his work here: www.gluciadelapuente.com/exhibicion_prg.php?cod=142

Featuring the work of Venancio Shinki, documentaries on Guzman Aguirre Altamirano and Madeleine Truel, a film starring Carlos Alcántara, a live performance by Susana Baca... and more. Honoring the legacy of the Peruvian migrations.

Freedom of expression remains under siege in Cuba despite the reopening of diplomatic relations announced in December. The fallout from performance artist Tania Bruguera’s attempt to hold an art ev...

Be the first to know and let us send you an email when New York Peruvian Film Showcase posts news and promotions. Your email address will not be used for any other purpose, and you can unsubscribe at any time.