The ONLY monthly printed publication that focuses on the tribal art market and delivers in depth coverage of events, exhibitions, auctions and legalities.

We are excited to be participating in this important international show. You will be absolutely delighted with the offerings we have on view!

My memories are shockingly vivid yet blurred. The tastes and smells are the most prevalent. Although 9/11 wasn’t the first time I was a first hand witness to violence and death it was the first time I felt totally helpless watching the bodies fall. I ran for my life while thinking why should I be afforded to live another day, do I deserve it? I thought about my girlfriend over 50 blocks away at her work and that determination to find her was enough to push forward through the crowds and dust.

I felt an overwhelming relief when I found Denise at a deli on 42nd street eating her lunch calmly. It was like seeing her for the first time again. I felt an urgency to whisk her away and escape from Manhattan. Our only way out was to walk through the midtown tunnel and 9 miles from Manhattan to my home at the time in Forest Hills, Queens. It was grueling, physically and emotionally exhausting but calming because we were together.

The next morning on September 12 we woke up together and we agreed to return to ground zero to assess the situation. We made it as far south as Houston Street where military barriers blocked our path. We just stood their staring into a giant abyss of black smoke. It wasn’t a dream, We were reassured of that. It was a nightmare and we were living in it. The weeks and months following the attacks were unnerving. Each day I would have to leave my desk at my design internship on 34th to the sound of emergency alarms. I would exit the bldg and join thousands of people in the street daily as the Empire State bldg and others were evacuated. We literally had to relive it over and over again out of an abundance of safety and precaution.

My experience as a survivor consists of a mixture of denial, anxiety, an aspiration to live life boldly like every day is my last, a desire to help others achieve their creative dreams through my galleries and a never ending sadness for the ones that perished that day.

Every year for the past 20 years on the anniversary of Sept. 11, I struggle to write my account of those memories to friends, family and colleagues. For 10 years I was numb from prescription drugs and only wanted to forget and move on. The past 10 years I’ve matured, stopped taking meds and opened up about my experiences even though it’s painful to have all these feelings again, its impossible to forget.

Fast forward 20 years later Denise and I are married and have two beautiful children. So happy anniversary to my wife! I couldn’t have asked for a better life. It’s true for me that one of the worst tragedies in our lifetimes is where I find peace, love and light even through the darkness. #neverforget #911survivor #ImASurvivor

10 years ago when I was just a young guy, Charles Warren begged me to come to Canada to take a 14ft Asmat pole on consignment that he didn’t have space for. When I arrived in a uhaul truck across the border to his home he explained that it was too broken to display. So I decided to take the piece and try to restore it and sell it to no avail. It’s turned out to be an impossible thing to sell. 10 years later Charles is still complaining on the ‘Authentic Tribal Art’ page (that I’m not a member of) that I stole it. Every few years Charles needs attention and posts about it (but only when I can not respond). Well, 2 can play that game. I’ve asked Charles many times to come pick up the pole. I have paid rent and insurance, plus restored it and had a steel base made to make it presentable. Not once has Charles offered to come get it. He just wants money because he’s always broke but no one has ever offered to buy it. It’s a late piece, broken, and not attractive.Charles is a scam artist and a blatant liar. He fooled me into taking this piece 10 years ago when I was young and niave kid and he has been playing the victim ever since. If I had known what I know now, 10 years ago I would have ignored him completely. Don’t fall for his BS l, It’s been a nightmare, no direct communication only passive agressive social media posts. I’ve done Charles a favor restoring this piece and keeping it safe in my gallery and this is the thanks I get.

photos Jesse Childress @ David A. Cassera - Arts of Africa, Oceania and the Americas

Statuettes (M-mbwoolu-tsyo)
These statuettes can be either a male or female figure in an upright posture. They each have variations in coiffure and headgear and relate to leadership and elders: Difference in the hair parting or how it is shaped, Bweni hats that have a rising crest and protruding knobs or a projecting brim distinctive of land-chiefs, Mpu skull caps of the regional chiefs in Suku. Another form is the kambaandzia miter-like form that looks like a pointed cone. All of these seem to be the symbols of leadership and authority but the headgear refers to older leaders. Stances and gestures can also be interpreted. Hands-to-chin gesture common signifies reflection, sadness, and grief with both the Yaka and Suku people. Both hands together at the upper chin gesture can pertain to a person confessing guilt or swearing secrecy. 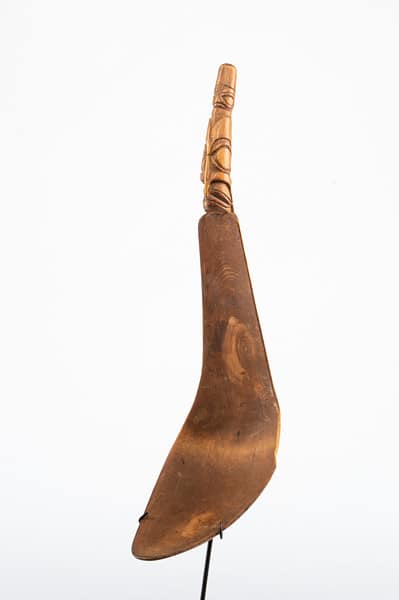 Tribal Art Objetcs for Sale contact us for more info!

Face to face with the Sutton Hoo helmet

Face to face with the Sutton Hoo helmet

Local artist insists stone pillar is '110 per cent' his carving, will meet with museum

Local artist insists stone pillar is '110 per cent' his carving, will meet with museum

The Royal BC Museum recently announced they'd determined the found item was likely used in rituals by the Songhees and Esquimalt First Nations. This carver says no, it's his work from 2017.

Cassera Gallery South Presents: BLUE A JOURNEY THROUGH THE AGES

Maskette, 3.5 inches from the Tsimshian tribe of the NW Coast. The Dating has been established to the early part of the 19th century around 1820. The pigment used is vivianite, A VERY interesting and unique material. The fact that vivianite is on the little mask tells us it's a shaman's maskette. Vivianite was used only for certain types of objects that denoted wealth or supernatural powers.
Vivianite does range into green shades, though, so quite often it and celadonite are confused. SOLD. — at Cassera Arts Premiers - Est. 1960.

Photos @jesse_childress @ David A. Cassera - Arts of Africa, Oceania and the Americas

In Potlatch ceremonials Tsonoqua appears as a feast dish figure and as masks worn in dances. These are often of giant size. Also as 'gikaml', chief's mask, which is usually of moderate size. The giantess, Tsonoqua, has a character which is threatening; long, bushy, unkempt hair, either slitted eyes or large open sockets, and pursed mouth through which she utters the paralysing cry 'hu hu'. Her face is all black with heavy eyebrows. She is a giver of wealth, power, and good fortune, and is a family crest figure. Another aspect of Tsonoqua was to control the magic 'water of life', a gift she bestowed on a family that wrested her secrets from her. Her importance may be seen in her magical Sisiutl house beams and posts with many filled boxes of treasure within. She is one of a large family of giants who lived in the faraway mountains and woods. A myth tells of the basket she carried on her back in which she collected children, taking them home to eat. The children usually outwitted her, however, because she was slow-moving.

#ashantistool carved from 1 piece of wood

Be the first to know and let us send you an email when Art Tribal Newsletter posts news and promotions. Your email address will not be used for any other purpose, and you can unsubscribe at any time. 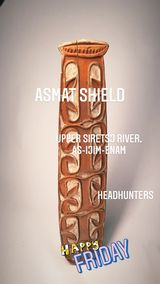