Simply Because We Give A F*CK! There are very few people who think like we do. We believe that even once an artist has 'peaked', it does not mean they over. Maybe they need to downsize in order to continue. Maybe they need to tour other countries, get on festivals etc...There is plenty of work out there for artists if they are still willing to go the distance and work! So What Kind of Music Does C

Simply Because We Give A F*CK! There are very few people who think like we do. We believe that even once an artist has 'peaked', it does not mean they over. Maybe they need to downsize in order to continue. Maybe they need to tour other countries, get on festivals etc...There is plenty of work out there for artists if they are still willing to go the distance and work! So What Kind of Music Does C

Dee Snider will not be stopped

Life lessons from the Twisted Sister legend: 'I always overdo it' 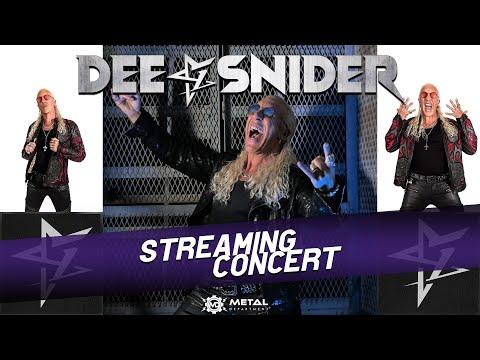 Dee Snider is gonna rock your house! Watch the first song of the entire live concert Dee made in New York on June 11th of 2021. The show was recorded in all its glory for this exclusive live-stream, and now it’s time to rock out through your devices!
Video:

Don’t miss out on tickets to Friday’s (Aug. 13th) game where TikTok sensation Adam and the Metal Hawks will be performing the National Anthem!🤘🏼

The best AC/DC experience you will find.

The Twisted Sister family has just lost another member. Frankie Banali, one of the founding members of Quiet Riot has just lost his extreamely brave fight with pancreatic cancer.

Frankie (seen here) filled in for Mike Portnoy at the Las Vegas Metal awards show in 2016. Frankie became, for the day, the 9th drummer to pass through our history. We all shared (in1983 and 1984) one of the greatest eras in the history of metal. Our thoughts go out to his family and to Rudy Sarzo, a QR bandmate and also a dear friend of ours.
This coming on the heels of the death of Pete Way is all too much and too soon.

The music world in general and the metal world in particular mourns the loss of both.

Frankie was an inspiration in his fight to win this and we celebrate his memory tonight with family and friends...
Jay Jay, Dee, Eddie, Mark as well as our agent Danny Stanton who brought Frankie to us for the Las Vegas show. Those memories, only 4 years ago feel like yesterday.

DEE SNIDER - I Am The Hurricane (Live) | Napalm Records

DEE SNIDER'S new video.
I AM THE HURRICANE

Pre-order "For The Love Of Metal Live" here: https://smarturl.it/FTLOM-Live out July 31st DEE SNIDER says about “I Am The Hurricane” Live: "If there is ever ...

"Strain" Official Video by Adam and the Metal Hawks

"Strain" Official Video by Adam and the Metal Hawks

http://www.adamandthemetalhawks.com "Strain" Official Video by Adam and the Metal Hawks

Adam and The Metal Hawks!

Adam Ezegelian of Adam and the Metal Hawks crushing it on American Idol. Clearly, a great choice of songs but also a great performance. Stay Hungry, Adam!
Be sure to check these guys out! They definitely WANNA ROCK!
#goingalltheway

Whatever you rock, there’s a Facebook Group for you. Music: “I Wanna Rock” by Twisted Sister Find Your Facebook Group(s): http://www.facebook.com/groups Face...

Special thanks to Kate Van Dorn and her band for shooting their video "In The Dark" here at Elite Sound Studios!

Sammy Hagar & The Circle invite James Durbin to reprise his American Idol performance of Sammy’s 1981 hit “Heavy Metal” in front of a sold out crowd at Thund...

TICKETS NOW AVAILABLE FOR JAMES DURBIN AND KILLCODE TOGETHER IN NYC!!!

How do you put together the “perfect” band?! Dee Snider offers advice to today’s generation with his 8th “Rule of Rock” 🤘

Who Will Rock You? is back and it’s bigger, better and louder than ever! Sibley Scoles is back now joined by rock legend Dee Snider and the radio broadcasting royalty of Kerri Kasem. The season kicks off in full rock fashion on March 28th, 2pm PST #whowillrockyou

The 100 Greatest Jock Jams of All Time: Critic's Picks

I’m sure you’re aware that this year’s half-time show with Maroon 5 was a major disappointment to many, as was last year’s show with Coldplay. While both these bands are hugely popular, they are lacking in any kind of sports connection with the majority of your viewing audience. The Superbowl is an event filled with excitement, anticipation and energy; the halftime show should not only feed into those emotions, but also build them even more into the second half. The Superbowl half-time show should never be filler.

To this end, all season long the NFL and its individual stadiums/teams use a barrage of hit songs throughout the game to “pump up” both the audience in attendance and the ones watching at home. Here is Billboard Magazines considered list of the most popular:

Each of the songs on this list never fails to energize the crowd. Yet, if you examine it closely, you will notice that only TWO of the recording acts on it have performed at the halftime show. This struck me as odd, since the connection the fans already have to these songs from hearing them throughout the season should be enough to supercharge any halftime show, if the original artists were to perform them.

The halftime shows need to rock, and using classic rock or classic hip-hop bands would provide the perfect soundtrack appealing to the widest age, music and ethnicity range. These are the songs that EVERYBODY knows, not just specific fans of a music genre or an artist. Who were Maroon 5 and Coldplay appealing to? Certainly not the greatest common denominator. Sure they are a big selling acts, but take AC/DC for example. They have the second biggest selling album in recording history, two of the top 100 Sports anthems on the Billboard chart and massive crossover appeal. THIS is the type of band/artist that needs to be considered for you half-time shows. Music virtually everybody enjoys.

I know it is not the NFL’s goal to fall short with these halftime events, but I think you are missing an obvious indicator as to whom you should be booking for them. Give the people the musical acts they already know and love to listen to at your games all year long! It just makes sense.

Thanks for you time,

To celebrate the canon of all-time great sports anthems -- which, as Americans, provides as much of our shared communal musical background as any contextual environment -- Billboard presents our list of the 100 greatest jock jams of all time. Be the first to know and let us send you an email when Coallier Entertainment posts news and promotions. Your email address will not be used for any other purpose, and you can unsubscribe at any time.

Send a message to Coallier Entertainment:

hi my name is Jami Gee i am new in long island i have been playing over 40 years, my E mail [email protected]
https://www.youtube.com/watch?v=FzAYAS2SJyU&fbclid=IwAR2EEAx6HLbPiqsjSUdiOZ3fbXU_q8ldjhtXkAXUWQU7El4hbMoGbAt0wpI
All LION’S SHARE albums will be available on streaming services and digital service providers for the first time on November 14. Remastered, and most with new artwork. https://www.youtube.com/watch?v=530p0Sfttfc Follow here so you don’t miss out https://open.spotify.com/artist/4yIytMmJ2tx30YdMAMkDSo
Leah - Edge of Your Sword
And broken wings don't fly....
Danny....thought you might get a kick outta these.....I took a few while you played the.....Commack roller rink