I call this photo " The lovers of Grand Central ". I have no
idea who they were. I was doing long time exposure of the
Great Hall and all those who were rushing for their trains
" disappeared " from the photo. Only these two remain....

The NRA recently stated its belief that the problem with this country is not that we have too many weapons but too few.

That august body wants to arm teachers and school administrators in all our schools to prevent another Connecticut “ massacre of the innocents” . Fair enough…

But why stop there? Multiple killings have taken place in
movie theaters, malls and post offices. Why don’t we arm projectionists, salespeople and post office workers?

The NRA’s reasoning, if that isn’t an oxymoron, needs to be taken to its logical conclusion:

We won’t be truly safe until we’ve armed everyone!

Well, not quite everyone. But let’s say anyone who appears moderately sane and is above the age of twelve. Which would then bring us into full compliance with the 2nd Amendment and it’s stern requirement about keeping an armed and well-ordered militia.

We would also need to address the irking issue of
armed inequality, which is a direct result of economic inequality.

Not everyone can afford to maintain
a full arsenal of weapons, including shotguns, assault rifles,
gr***de launchers, bazookas, etc. For one thing, not
everybody has the storage space. New Yorkers with
their tiny apartments would be at a clear disadvantage.

People on food stamps, for instance, consider themselves
lucky to own a Saturday Night Special !

Problem is that Republicans, of course, will never hear of it.
It smacks too much of Socialism. Why should the rich be made to share their beloved arsenals with the indigent 47% ?

What? Me give up my Purdy, all sheening with walnut oil, that’s been handed down in my family from father to son ?

No way, José ! Enough of these handouts and entitlements already ! If those lazy bums want to be fully armed let them work for it !

The only alternative, harking back to the Cold War,
and its mantra of “ mutually assured destruction “,
would be expensive but not any more so than Obamacare.

We already spend $4.8 billions in private weapons
purchases every year. With the government stepping in to
subsidize the arming of the poor we could
see a nice little bump in GDP. Say of .5 %

In a capitalist society such as ours, full armaments equality is a pipe dream since, as in any arms race, the rich will always have the option of raising the ante:

Decommissioned tanks and Black Hawk helicopters for the middle class; surplus B-52 bombers and last generation tactical neuclear weapons for the Forbes 500.

Yet, politically speaking, some token attempt must always be made to level the playing field.

Another useful piece of legislation would be the
requirement that all personal weapons carried into public
places be concealed at all times.

Here’s the thinking behind that. The whole purpose of this armaments exercise is deterrence. As in Poker, the game loses its raison d’étre if you can see the other players cards.

Let’s suppose that you head to the supermarket and
you’ve forgotten to bring along your Colt.45 or your Beretta, your Sig Sauer, your G***k or your Walther.

You would clearly be at a disadvantage vis a vis all the other
armed shoppers.

But since , by law, all weapons would be concealed the others would be kept guessing. And there is a strong likelihood that you might get home safely with all of your groceries.

If ,on the other hand, all personal weapons were on full display at all times and everyone was armed to the teeth, the trigger happy ones might be overly tempted to shoot first and ask questions later.

The carnage on a national level would be intolerable and could
negatively impact our already declining population
growth.

Hispanics, statistically the only segment of the population with still a bit of pro-creative mojo, would have to screw overtime.

Nationallly , It would mean a return to the bad old days of the Old West- of Tombstone and the OK Corral- city streets littered with corpses; the morgues overflowing; undertakers working 24/7.

And ,surely, not even the NRA could be wishing for that !

But then, who the hell knows what, in the dark recesses of
their nasty little hearts, they do yearn for….!?!

Would you buy a slightly used camel from these two? Many
did at last Thursday's Tenth Annual Thorntree Benefit which
raised much needed funds for the education of the children
of Kenya's nomadic Samburu tribe !!!!

This coming Thursday will be the Tenth Anniversary
Benefit of the Thorntree Project. It's a chance to see
me reprise my cameo of a somewhat louche used camel salesman! If you're in the NYC area don't you dare miss it! 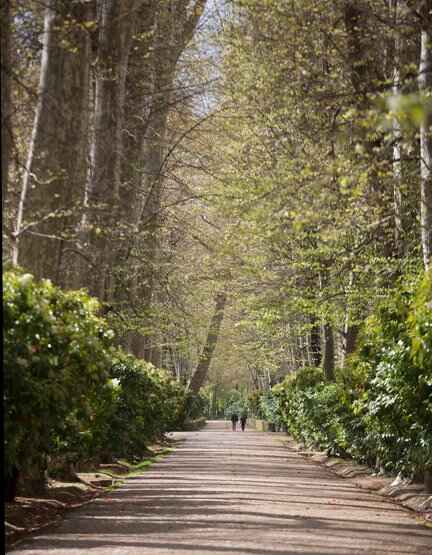 This is in the Gardens of the Prince in Arranjuez, one of my favorite and most romantic spots on the
planet. Slip on your earphones, put on Rodrigo's
Concierto de Arranjuez and you are transported
back in time to the summer palace of the Spanish
kings in the eighteenth century, with their golden
barges on the Tagus river, lulled with pleasures and
delights.....the famous strawberries of Arranjuez
are at their ripest and juciest. The asparagi, doused
in salt, doused in olive oil and done " a la plancha ", on a hot grill are at their sweetest. This is
spring at its most glorious !

Taken at today's Easter Parade in New York ! What a ravishing Spring!
Why is it I never stopped to look at it before !?! Interesting that two of the world's great religions have co-opted Spring for their purposes. Smart " branding " guys ! Still, It's humbling to think that this amazing, riotous panoply of color would still occur each and every year on cue even if we as a species were no longer here to contemplate it......

Because of the considerable interest in Samantha Beste's
extraordinary cityscapes we are extending her show until
May 10th. 2012. Please don't miss it !!!!

Stop by for a glass of " bubbly " at the gallery on Second Saturday !!!

Tom Chibarro bought his first motorcycle in 1964. It was a BMW.
He's owned sixteen motorcycles since. Now in his eighties he no longer
rides. But his love affair with these moveable objects of desire remains
unabated. Which is why he paints them lovingly and in exquisite detail.
Next best thing to owning a Ducati is having Tom's painting of one
on your wall. Plus you'll save a lot of mine and will probably live longer!

Be the first to know and let us send you an email when Daniel Aubry Studio posts news and promotions. Your email address will not be used for any other purpose, and you can unsubscribe at any time.