Publishing Data Management has been an innovation leader in providing publishing solutions since 1970. Beginning as a phototypesetting company with a strong client base in the financial services, advertising, design, magazine and book publishing, corporate identity and manufacturing services sectors, we have changed with the advancing technologies into a company which specializes in developing and using programming-based automated document publishing tools to facilitate cost- and time-efficient ways to bring your content to web or print.

We want to reassure our clients and friends that Publishing Data Management remains operational during the coronavirus global pandemic. Early on, we implemented a remote working plan and we will continue to service your needs regardless of the severity or duration of the epidemic.

Our primary concern is the safety and well-being of our employees, our clients, and our families. Accordingly, we have suspended all business travel, and all meetings and presentations will be virtual, until further notice. We have been carefully following guidance from trusted sources including the CDC, WHO and local health authorities.

As always, we are focused on providing exceptional service and support to the financial industry, and will do our best to maintain a "business as normal" mentality during these unusual circumstances while protecting everyone involved.

Thank you in advance for your flexibility and understanding. Our customer service teams are available as usual and are ready to help with any questions you may have. If you know your project manager's email address, please continue to use it as a primary means of communication. If you don't have that information or are not yet a client, please email us at [email protected].

To reach us by phone, please call (929) 277-7937. That number rolls over to our customer service person normally covering phones when you call. Note: our Verizon business number is not accessible at this time.

For all those affected, either directly or indirectly by this health crisis, our thoughts are with you.

Merry Christmas with health and happiness! 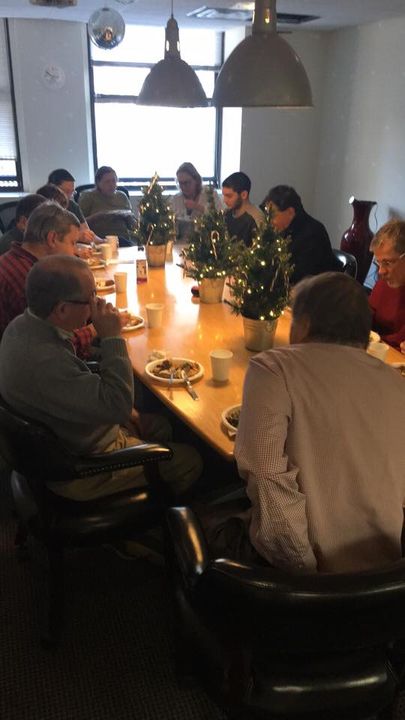 Publishing Data Management announces that the Chinese Government has approved an additional patent for the software engine that drives the ProofPlus® electronic document system used for compliance-critical financial, pharmaceutical, and insurance filings. Ready for the holidays!

Some old time photos our our building 39 Broadway. From the Museum of NYC webiste. http://collections.mcny.org/C.aspx?VP3=SearchResult&VBID=24UAYWRM3MIOC

Watching the ticker tape parade for the Champions USA Womens Soccer Team from our Offices at Wall Street!

Happy New Year for all of us at PDM!

Closeup of the newly installed Freedom Tower spire from our offices

View of the newly installed Freedom Tower spire from our offices

Alexander Hamilton is buried at Trinity Church, up the street from our offices.

The warm weather has melted the snow into puddles at Battery Park, providing birds with an instant bird bath!

Freedom Tower (in the background) is lost in fog on this snowy day.

Shot from our offices.

Happy holidays and best wishes from all of us at PDM!

XBRL generation and filing are built into ProofPlus!

So foggy in Lower Manhattan this morning, you can barely see Battery Park City and Jersey City has vanished!

Red Cube sculpture by Isama Noguchi in front of the Brown Brothers Harriman & Co building, across from Zuccotti park, a couple of blocks from our offices in Lower Manhattan

Happy Thanksgiving from all of us at PDM!

According to Bloomberg Businessweek, Google’s loss occurred when its filing agent, R R Donnelley, prematurely submitted a draft version of the earnings report to the Securities and Exchange Commission (SEC) before the market closed – and without authorization, Google stated.

Financial analysts and reporters – who monitor SEC filings – publicized the report within minutes of the filing. Google suffered a nine percent drop in the value of its shares that wiped more than $20 billion from its market capitalization; trading in Google stock was temporarily suspended.

"It doesn't happen often," as Ron Passaro, a former filing agent in Manhattan noted, but "The risk is insane."

R R Donnelley blamed its blunder on “human error” and says it is investigating the incident.

PDM President Addison Roverano’s comment concerning the “human error” was “An automated end-to-end document publishing system – that does not rely on handoffs to third parties such as the print vendor in question – allows a company’s internal business rules and lines of authority to be stringently enforced. No third-party customer service rep should be able to file a company’s document with the SEC.”

PDM’s ProofPlus® system allows online collaboration among multiple authors, editors and reviewers and requires no third-party handoffs even for document composition, which can now be 100% automated. Its software does not allow filings to the SEC to be transmitted until the document is finished – issues corrected, content fully resolved, and then specifically approved for release by the firm itself through an audited electronic sign-off.

Systems analyst Kathie Brown recalls, “The development of ProofPlus® as a completely automated publishing system was triggered by PDM's mutual fund customers and their need for collaboration and rigorous version control in preparing multiple financial regulatory documents that include shared 'single source' content.

ProofPlus® meets these needs by integrating project management, workflow tools, a robust permissions set, and a formal approval process with accountability at every level.”

PDM, a private company headquartered near Wall Street in New York City, has been supplying services and software tools to the financial industry for over 40 years.

Contact Publishing Data Management at +1 (212) 673-3210 or [email protected] to make sure you eliminate a catastrophic risk to your firm, or visit PDM’s website at www.proofplus.com

PDM's press release picked up by newspapers around the country!

Be the first to know and let us send you an email when Publishing Data Management Inc. posts news and promotions. Your email address will not be used for any other purpose, and you can unsubscribe at any time.