We believe in the good we each have to offer and want to tell the stories that uplift and encourage us to be our best selves. Are you looking for end of year tax deductions? Contact MOD Productions Company at [email protected]

MOD Productions updated their information in their About section.

MOD Productions updated their information in their About section.

We are on Spring Break with our cute kids, but we still want to help!

Today, we are sharing a great blog that has a bunch of resources for exploring the world, FROM HOME!

Check out: https://www.localpassportfamily.com/blog
They have so many great resources for All Ages.

Breakfast and Books is still happening to help during this pandemic. We will be moving to 10 AM EST in order to help some of our Central, Mountain, and Pacific friends join in the fun LIVE!
See you tomorrow at 10:00 am!

We want to help!

Every morning at 9:00 am EST, MOD Theatre Company will be doing a LIVE stream with songs, story time, and silly jokes.

We want to give parents 20-30 minutes in the mornings to have a time to interact with their kids through music and stories OR allow us to help entertain your crew while you get ready for the next part of your day.

Join us daily or once, whatever works best for you! 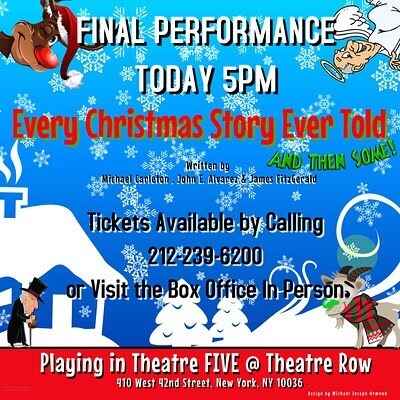 Make sure you get your tickets now!!!

Wow! Thanks Eva at Hi! Drama for coming and enjoying our little show! We are so glad you spent your evening with us!

“Every Christmas Story Ever Told...And Then Some!” created by Michael Carleton, James Fitzgerald and John K. Alvarez is the funniest joyous experience you will have this Christmas season!

Cameron Asay only wants to perform “A Christmas Carol” as they rehearsed but the other two actors involved, mutinied on the Yuletide. They were sick of “A Christmas Carol”. It’s been done to death. They asked the audience for inspiration for some other BHCs: Beloved Holiday Classics.

I mentioned two of my favorites: “Pocketful of Miracles” and “The Lemon Drop Kid”. Both based on Damon Runyon stories. They didn’t know Lemon Drop Kid where “Silver Bells” originated and stars Bob Hope.

Then with the speed of the calculations of how fast Santa would have to go, if he really did deliver the goods to the good kids, they proceeded to present several BHCs.

Margarin Hobson was already prepared and doled out colored index cards with interesting Santa Claus facts from around the world with dire consequences for bad little kids. This made Adam Daveline especially happy, as the sweet, naive fella still believed in Santa Claus.

In between scenes of Grinch, Rudolph (TV Version), Frosty the Snowman, Gift of the Magi, Cameron kept trying to sneak in Scrooge. Too name just a few. Even the obligatory fruit cake made an appearance.

If more cast members were required for their stories they plumbed the audience to help out.

The second act saw a mashup of “Christmas Carol” with “A Wonderful Life” that was comic silver and gold. Scrooge turning into Jimmy Stewart. Priceless. Then we got a quick succession of Christmas songs.

I was either laughing my stockings off or grinning from ear to ear.

Adam Daveline, Cameron Asay, Magarin Hobson played so well off each other despite their different personality traits which really made it a treat.

“Every Christmas Story Ever Told...And Then Some!” will put you in the holiday spirit more than a cup of eggnog.
BEAMING HAPPY FACE!!
CLOSES DECEMBER 22ND

What has these two in stitches?

Come find out with your FINAL TWO WEEKENDS to see “Every Christmas Story Ever Told (and Then Some!)”

Feeling real cute this week, what with this amazing deal for our MOD friends and family.
*
Can’t wait to see you all there!
*
*

What is our cast so excited about?
*
A new block of tickets released for only $39.50!
*
Only two weekends left to catch this Christmas Comedy!

Got the Monday Blues???

We have a cure for that! Get this incredible deal and come laugh the night away with us. Good for all of our Monday performances!!

Be the first to know and let us send you an email when MOD Productions posts news and promotions. Your email address will not be used for any other purpose, and you can unsubscribe at any time.

Send a message to MOD Productions:

Alex is loving your breakfast & books videos! We're getting caught up on them and he even wants to get up early some morning this week so we can watch live and say hi. I'm SO glad you're doing this! Miss you!
Is the Christmas Carol a play or a musical ?
MOD's next show opens tomorrow!!! You won't want to miss it!