The music page for all things Gothic...

For those of you who don't know The Mountain Goats (and many of you probably don't) the new album is well worth a listen. Whilst not a 'goth' album in any traditional sense, it is Mountain Goats' John Darnielle's homage to Goth.
The opening track 'Rain in Soho' has a chorus reminiscent of the Sisters of Mercy circa 1985. With a line that insists 'no one knows where the bat cave close', Patricia Morrison could be the one accompanying Darnielle on the vocals. This is followed by the second track which is a pop-folk-easy-listening but heck of a catchy little tune entitled 'Andrew Eldritch is Moving Back to Leeds'. Darnielle's capacity for quirky lyricism is here in all it's fullest glory.
Two more tracks on the album are particularly worthy of mention. 'Shelved' is a masterpiece in two halves with the second half switching to an unmistakable lead guitar homage to the Cure.
Finally, 'Abandoned Flesh' will have all true Goth aficionados smiling. Mention of Robert Smith, Siouxsie, the Bolshoi, the March Violets and Red Lorry, Yellow Lorry in one track is pretty cool and mighty impressive but do we concur with Darnielle's assertion that 'the world forgot about Gene Loves Jezebel'?

This Mortal Coil released three albums between 1984 and 1991 and, although all three were patchy, there were nevertheless moments of Gothic pop brilliance. A collaboration of various 4 AD artists, if you haven't checked it out already, start with the first release, "It'll End in Tears" which contains the hauntingly brilliant 'Song to the Siren' sung by the Cocteau's Liz Fraser.

We are all dreaming of a black Xmas

Robert Smith and the gang get into the festive spirit!

The Sisters of Mercy's Andrew Eldritch hits back at all those who have ever criticised him.

Dark Entries No 3
From suicide to murder. Nick Cave and his Badseeds crank the darkness up a notch.

Dark Entires No 2
As promised, some more of the darker lyrics of Goth. This from Left Wings of Desire - suicidal ideation as poetry!

Dark Entries No 1
Over the next few weeks, we will bring you some of the darkest lyrics in Goth. First offering comes from the voice of the Cure's very own Robert Smith.

Patricia Morrison, formerly of the Gun Club and the Damned and, perhaps most famously, the Sisters of Mercy. Sisters frontman, Andrew Eldritch was keen to add some undoubted glamour to the band's image but Morrison left after only one album (Floodland) being reputedly paid a flat rate of only 300 pounds per month!

Clan of Xymox artwork by J.D. Rodriguez that captures the Gothic heart of the band.

In 1985, Anne Marie Hurst (former singer with the Skeletal Family) and Gary Marx (former guitarist with the Sisters of Mercy) joined forces to form the band, Ghost Dance. They released two albums before splitting in 1989.

On this day (17 August) 1956, screen star Bela Lugosi, best known for his roles as Dracula, died. 23 years after his death, Bauhaus released the single 'Belarus Lugosi's Dead'. Lasting over nine and a half minutes, it is now considered the first Goth record ever made. It defined an entire genre, elevated the band to cult icons of the macabre but failed to enter the charts.

The Wax and Wane EP by the Cocteau Twins was released prior to their debut album 'Garlands' in 1982. Extremely rare, it is reckoned that there may only be a handful of copies left in circulation. The Cocteau Twins took their name from a song by fellow Scottish band of the time Johnny and the Self-Abusers (later to become Simple Minds). 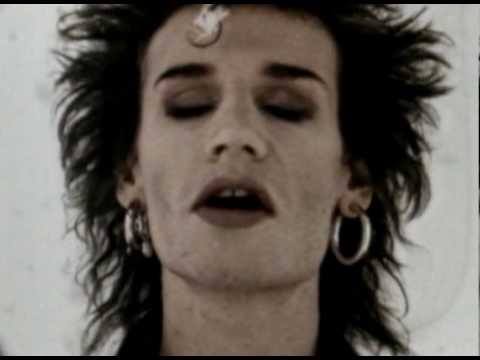 Daniel Ash (Bauhaus and Love and Rockets) at his cadaverous best!

WTF? Kanye and Lorde in Goth shock horror! Uncool and so wrong.

Our thoughts tonight are with Nick Cave and his family. 15 year old son, Arthur, died today after falling from a cliff in Sussex, England.

We received this last week and it has divided the TGT's team, with one or two of us agreeing with the sentiment (sorry, Siouxsie).

This October, London, England may be the place to visit. The Mission play their first live gig since 2008 and have some very special guests!

Sisters of Mercy's Andrew Eldritch trying to sound like Chuck D whilst looking a lot like Michael Jackson. Patricia Morrison broods beautifully beside him.

A Bauhaus promo pic from 2008 when the band released their fifth studio album, 'Go Away White'. It came a full 25 years after their fourth - 'Burning From The Inside'. Opinion remains hugely divided about 'Go Away White' but in our view, it is brilliantly Bauhaus despite the passage of time.

'Babe I'm on Fire' is the closing track on the NCATBS album 'Nocturama'. The song is almost 15 minutes long - manic, frenetic, Cave and his Badseeds at their brilliant best. Lyrically witty, poetic and offbeat, Cave outrageously pairs the words 'hi-jackers' with 'back-packers' and 'Blixa' with 'mixer'.
He spits, yells and croons maniacally throughout and, with cocky confidence, lists all of the people who say he is 'on fire'. Ultimately though, this is a sensitively constructed love poem cleverly concealed in a riot of noise. A frantic bass-line is meshed with some free styling on an electric organ as Animal (surely it's him!) accompanies on the drums. It is the sound of a cocaine-fuelled orchestra in a war-torn living room - claustrophobic and deafeningly intimate. If Cave's words of eternal love don't actually make your heart bleed, the Badseeds do everything in their power to ensure that at least your ears do.
When the quarter of an hour is finally over you may feel spent, exhausted and perhaps even violated. Bizarrely though, you may be ready for more. One thing is for sure, after listening to this performance - it is very hard to argue with Nick'. Cave, and his Badseeds, are indeed on fire!

Some goth legends as they were then and as they are now.

This artwork is by Nati Cainelli and captures Evanescence lead singer, Amy Lee, whilst playing in South America in 2012. Amy Lee is a classically-trained pianist.

THE DARK PRINCE
It would be easy to write off Marc Almond as a purely pop icon. It would also be a big mistake.

The man, perhaps best-known for his Soft Cell hits Tainted Love, Say Hello Wave Goodbye, cannot be pigeon-holed by these two timeless pop classics. His career has been long and varied since then. The fourth and final Soft Cell album, This Last Night in Sodom, is an assault on the senses and as fresh now as it was when released over thirty years ago. His Marc and the Mambas releases are also well worth checking out. Beyond that, he has released an album of Jacques Brel covers, an album of Russian folk songs and, more recently, an album that tells the story of one man's viewpoint of living through the Bubonic Plague!! The latter album doesn't get any darker than that and, although not Goth in any traditional sense, nevertheless as Gothic as they come.

His solo album, Violent Silence, released in 1986, is also well worth checking out. Containing only five tracks, with piano and subtle string arrangements, the lyrics and delivery are disturbingly twisted. The picture below, with the raven and his characteristic skull necklace and black clothing perhaps gives a sense of where Marc's heart really lies - the dark side! Top Goth Tunes formally adopts Marc Almond as an honorary Goth.

On the 21st of April 2013, the Cure took to the stage at the Foro Sol stadium in Mexico City only half an hour after the stadium itself had been rocked by a 5.9 magnitude earthquake. It also happened to be Robert Smith's 54th birthday. What happened that night must rank as one of the most remarkable concerts ever.

The band proceeded to play a total of fifty songs! The concert extended to four very full encores and lasted a remarkable 4 hours and 16 minutes. The entire set list that night was as follows -

To quote our very own tag line, "Goth's not dead, it's undead".

Is it art? Is it good? We don't know!!
The 'artwork' below are works by Daniel Ash of Bauhaus and Love and Rockets.

Andrew Eldritch and Chuck D standing shoulder to shoulder in 1991. In a twist that brought together entirely different musical styles, The Sisters of Mercy and Public Enemy toured North America together in 1991. Unfortunately, the tour was cut short as venues in a number of States cancelled gigs fearing race clashes between fans.

Here at Top Goth Tunes, we do enjoy the darker side of life. Nevertheless, this painting by the artist Ben Smith entitled "Leonard Cohen Consoles Nick Cave", remains one of the most unsettling images we've seen. Cohen's influence on Cave's work is unmistakeable but this particular work of art is, well... disturbing?

We are currently compiling the Top Ten Most Danceable Goth tracks. Once the fights in the office are finally over, we will release the list on this page at the end of the month. The current favourite for top spot is this...

Not only does this tribute night sound ultimately appealing... we are loving the artwork on the flyer.

We haven't been able to establish what year this flyer was from but the line-ups and the ticket prices suggest it must have been very early eighties? Nick Cave's Birthday Party and the Sisters in the same show followed a few nights later with Ian Astbury's Southern Death Cult. Well done the Zigzag Club!!

The legendary Nick Cave, as a caricature, is easy to paint; all black linearity and angular shadows like some Goya grotesque. A sinister lord of malevolent melancholy, the Darth Vader of rock who crushes the souls of inane journalists the world over with a caustic grunt and the stylish stamp of a glistening Cuban heel. But the truth is eminently more subtle, rewarding and humorous. Emanating as much dark matter as he does spiritual enlightenment, Cave and his coterie are an all round class act.

His notorious band, The Bad Seeds, have been a continually evolving line up, far too long to list, and they ideally require a career synopsis all of their own, so insane is their level of musicianship, so devastating their reputation. Never was a band so aptly named. Wildly talented, and really f**king dangerous, they’ve aged like sexual experience - exhilarating, hazardous, and increasingly weird.

Sisters of Mercy's Andrew Eldritch on stage in 2007 looking much more like Tintin than one of the Godfathers of Goth!

Robert Smith played guitar with Siouxsie and the Banshees on tour way back in 1979. We reckon that must constitute a Supergroup!

Thanks to Marianne Felix for sending us this pic.

Hard to imagine that Fields of the Nephilim are now 30 YEARS old! They celebrated their 30th anniversary by playing two special nights at Shepherd's Bush Theatre, London, England in December 2014.

A rare pic of Patricia Morrison (Gun Club and Sisters of Mercy) on stage with Anja Huwe (Xmal Deutschland). Sisters doing it for themselves?

Top Goth Tunes asks the question - who (or what) is killing Mr. Moonlight? Peter Murphy appears to be ageing very badly! Nevertheless, we still love you Peter.

A young Tobias O'Kandi (singer with O Children) sporting a cool line in t-shirt with friends.

Be the first to know and let us send you an email when Top Goth Tunes posts news and promotions. Your email address will not be used for any other purpose, and you can unsubscribe at any time.