A Horror Anthology: Held captive by a circus, Malu is frantically rescued by her husband. A little girl's journey from the world of nightmares to the nightmare of reality. A gay couple's romantic getaway turns deadly. A young woman's ride-share turns deadly.

Victoria meets Olympic star Max Bauer whom she fancied as a teenager. As their romance gradually sours and she desperately holds on to their relationship, their love story goes from bad to worse.

The S.A.S. is the United Kingdom's most renowned special forces regiment, tasked with life threatening missions in some of the most dangerous places on the planet. Many try to get into the S.A.S. but only the elite make it.

The critics agree - Good Posture is an indie gem!

A young private investigator in LA toes the line between danger and heartbreak as he tries to help a woman to commit fraud in order to get the money he needs to help his sick mother.

After breaking up with her boyfriend, Lilian has been placed into the care of family friend and famed reclusive author, Julia Price. To impress her ex-boyfriend, and the other cynics around her, Lilian suddenly decides to make a documentary about Julia - albeit an unauthorized one - with surprisingly amusing results.

When an artist struggling for purpose meets a mysterious yet charming stranger, she becomes entangled in his twisted attempts to relive the “perfect moment.”

When best friends Ray and Kenneth drunkenly foil a robbery, Philadelphia becomes abuzz with the antics of these local heroes.

Amy and her boyfriend Jay escape Los Angeles on a much-needed romantic getaway to the beautiful forests of North India. But when they stumble upon the haunting exorcism of an innocent girl and secretly bring her back to their resort, paradise is quickly turned upside down.

HIGH & OUTSIDE: A Baseball Noir

A minor league baseball player refuses to believe his career is over and takes desperate measures to keep his dream alive.

When a young car thief stumbles on the invention of the century, he and a sassy checkout clerk named Kate have the adventure of a lifetime.

CAN I CATCH IT?

We all worry about our health, from headlines that raise concerning questions to confusing medical myths and common illnesses that leave us searching for answers. Investigate what's worth worrying about and what's not.

we’re back, back in the Berlin groove #berlinale2020 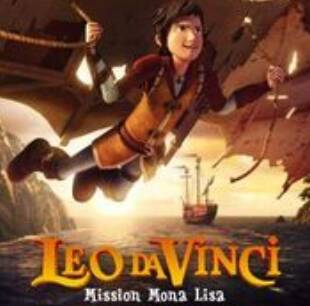 “I love movie nights with my family and we all loved watching the fun and exciting adventures of Leonardo DaVinci. Family-friendly and funny to watch for all ages.

I love movie nights with my family and we all loved watching the fun and exciting adventures of Leonardo DaVinci. Family-friendly and funny to watch for all ages.

"...the family got reeled in and we were all hooked right up until the ending credits.” Leading Blogger Robin McCoy-Ramirez, Founder of Inspired by Savannah (Formerly SoothEaze) votes YES for #LeoDaVinciMissionMonaLisa

"definitely a movie we wanted to see."

The #DadVote is in! #DadReviewer Dave Taylor of Go Fatherhood says #LeoDaVinciMissionMonaLisa is "wholesome and entertaining family fare."

#NowPlaying Who is your favorite character in #LeoDaVinciMissionMonaLisa? The brilliant Leo, the loyal Lorenzo, the clever Lisa, the feisty Agnes, the intelligent Niccolo, the wily Ciacco?

Find a theater near you: leodavincimovie.com

NOW IN THEATERS! We so excited and honored to be presenting the award-winning, family, adventure animation "Leo Da Vinci: Mission Mona Lisa" by Gruppo Alcuni - Animation Studios. Tapped as a "new family classic" and #MustSee #FamilyMovie by critics, parents and kids alike.

Thank you, Life With Kathy!

#ad Leo Da Vinci: Mission Mona Lisa comes to select theaters tomorrow, August 2nd. This is a wonderful family movie that is filled with adventure. A must see! Check to see if it will be in a theater near you! bit.ly/2Mxc0ZS #LeoDaVinciMissionMonaLisa
EPECmedia Ammo Content

This Friday! We are thrilled our animated, Dove Approved (ALL AGES) #mustsee family movie is opening in select theaters nationwide! #LeoDaVinciMissionMonaLisa make sure to see it!

With high octane chases and a strong moral purpose, 'Leo Da Vinci: Mission Mona Lisa' has all the elements of a timeless family classic.

Leo Da Vinci: Mission Mona Lisa Giveaway! Imagine a young Leonardo da Vinci hanging out with a young Mona Lisa, and you've got the basis for this new movie opening in limited US theaters on August 2nd. Receiving the all ages approval by The Dove Foundation, this movie is sure to appeal to families w...

Thankyou to That Moment In.com for this great review of Leo Da Vinci: Mission Mona Lisa which calls the film "fun for the little ones"! Escape the heat and venture into cinemas across the country next Friday, August 2 when the young inventor arrives on the big screen!
https://www.thatmomentin.com/leo-da-vinci-mission-mona-lisa-review/
#familyfilms #holidays #holidayfilms #animation #animatedfilms #leodavincimissionmonalisa #families #family #cartoon #movies #holidaymovies #children #childrensfilms #filmsforfamilies

Leo Da Vinci: Mission Mona Lisa is a 2019 animated film about a young inventor and a mysterious storyteller who comes to town and speaks of a hidden treasure.

Check out Fastlife on Amazon or Tubi!

'The Hello Girls' brings to life a previously unknown story of courageous women. Stream the documentary for free with Amazon Prime today.

In 1918, the U.S. Army Signal Corps sent 223 women to France as telephone operators to help win the Great War. They were intrepid, united in a common cause and like Joan of Arc before them, they wanted to save France. Told through 100-year-old letters, photos, rare archival footage, and interviews w...

Be the first to know and let us send you an email when Ammo Content posts news and promotions. Your email address will not be used for any other purpose, and you can unsubscribe at any time.

Ammo is your one-stop destination for free movies, TV and documentaries. Find something to watch on our XUMO channel: https://www.xumo.tv/channel/9999321/ammo

Green Butterflies / Mariposas Verdes (2018) Mateo is an intelligent boy who falls in love with his friend Daniel. When their relationship is reveled, Mateo is at a crossroads and must decide between fighting his adversities, or giving up everything - including his own life. A story about bullying that occurs among young people in schools, especially against those of different sexual orientation in the LGBTI community. #LoveHasNoGender Rent or Buy it on Amazon.com https://www.amazon.com/Green-Butterflies-Brisa-Botero/dp/B07DS7P81X #SupportIndieFilm Genres Drama, LGBTQ Director Gustavo Nieto Roa Starring Brisa Botero, Julio Bracho, Kevin Bury

"Game Changers" hosted by Alex Trebek, featuring interviews with a number of game show hosts and producers, giving fans a "behind the scenes" look at the phenomenon and success of TV Game Shows. "Game Changers" is coming June 29! Save The Date! Los Angeles, get your tickets to be part of our theatrical premiere audience opening weekend Laemmle NoHo 7, Laemmle Playhouse 7 & Ahrya Fine Arts by Laemmle . https://www.laemmle.com/films/index/43920/2018-06-29?modal=&replace=#get-tickets

Four unemployed college graduates discover they have the desire and talent to rob banks. But they soon find themselves getting in much too deep as a police detective closes in. #supportindiefilm WATCH NOW: http://a.co/9yY0dSq

Fall 1848 - Amelia and her husband secretly head west in pursuit of California gold. Now the sole survivor of a savage attack, Amelia is left without resources or the know-how to battle hunger and the elements. Can she make it through the frigid winter alone? WATCH HERE: http://a.co/guN9mlL #thetrail #supportindiefilm #oregontrail #survival

WATCH NOW: Marina Abramovic in Brazil: The Space In Between

In search of personal healing and artistic inspiration, Marina Abramovic travels through Brazil experiencing sacred rituals and exploring limits between art, immateriality, and consciousness. How far will she go to create her work of art? http://a.co/2BxqMKw #supportindiefilm #marinaabramovic #art

It's a high school summer job for Julia and Alexander - the chance to earn money and work with eccentric, charismatic social studies teacher, Mr. Zenidro. But something else awaits them in the empty, yet mysterious school building... Watch the horror in the hallways now! http://a.co/eEtb2sW #horror #thriller #streaming #supportindiefilm