MIDDAY DJ ON ELECTRIC FM! CREATIVE WRITER TOO! RUBY TUESDAY IS AVAILABLE FOR ON-AIR AND VOICE OVER

This is how I'm starting off the work week with my show on electricfm.com! Be sure to join me from 10:00 a.m. to 3:00 p.m. and grab that Nifty little phone app too!

Bird Alert! I'll be playing with my bird today. The boss gave me turkey day off! I return after Thanksgiving! Be sure to keep listening to Electricfm.com while you're doing your holiday thing.😉

Tune in to Electricfm.com starting at 10:00 a.m.! Girlfriend talk, why Julia fox really dated Kanye, Gwyneth Paltrow's mom and remembering Olivia Newton-John at the American Music Awards. My pockets are stuffed with pure dance hits and I'm going to be playing them for you minus commercials! Join me!

Food vendors and musicians will take over the sidewalks as well.

Surprising Research Finds Rats Can Dance to Music Too

A new study found that rats share a similar strength to humans when it comes to beat-synchronizing between 120-140 BPM music.

How are you keeping warm today? Plug into Electricfm.com and we'll warm you up!

I haven't been kissing one. I am certainly not LICKING one!

The Sonoran desert toad is very, very poisonous... but some people are willing to risk it anyway.

Recreating Songs Entirely Out Of Objects

Recreating Songs Entirely Out Of Objects

The show tomorrow morning is action-packed on electricfm.com! We've got a little Barney news in there too. Nothing like the s*xy purple dude! Kim Kardashian, Mila Kunis, the Billboard Latin music awards, and adult toys! Most of that makes sense except for the adult toys. It was announced that McDonald's has a Happy Meal for adults coming out, but don't worry the toys are innocent.😆 10am to 3pm with me on Electric FM!

The aquatic wear brand, Botter, made waves during Paris Fashion Week with a bright collection that featured bold accessories like water-filled condom gloves. 7PM! You don't want to miss this! My friend Jimmy interviewed Scott Baio when he came back to Brooklyn this week. Tune in at 7 p.m. tonight and you may even hear how I influenced part of the interview.😁😉 It airs on Hamilton Radio.📻

Stay tuned for a little surprise! Find out what the connection is between DJ Ruby Tuesday and a celebrity who was in town this week! Details to follow! A study shows that too much screen time could be causing you to age faster.

If You Hear A 'Code Brown' While Shopping, Get Out Of The Store Immediately | 106.7 Lite FM

It's the store's secret way of alerting employees, but now you'll know what it means too.

LOOK AT HOW AWESOME THE CROWD WAS LAST NIGHT AT THE 18TH AVENUE FEAST. THIS GUY CRACKED ME UP TOO. IF YOU WANT TO FAST FORWARD TO 1:45 ON FOR MOST OF THE ENTERTAINMENT, FEEL FREE. IF YOU WERE THERE OR IF YOU MISSED IT YOU'RE GONNA WANNA SEE THIS! LOVE THE ENERGY! LOVE MY BROOKLYN. FOR THOSE WHO DOUBT THE LOVE AND UNITY OF OUR BKLYN, DIGEST THIS BABY! Ruby Tuesday DJ Ruby Tuesday

Thank you, whoever showed up at the 18th Avenue Feast to support my friends who performed and also stopped by to say hi to me. Always great meeting everybody, especially my Electric FM radio fans! Glad you could all dance and have a great time on the final night of the Feast of Santa Rosalia in Brooklyn New York! We did it! We showed everyone what Joy is all about! Great seeing Angelo, Maria, Sal, Connie, Enzo, (and their kids), also Alexa, Patty and many more awesome people! 😘 Thank u to the NYPD too!👮‍♂️👮‍♀️ xo Ruby Tuesday DJ Ruby Tuesday

The Feast Of San Gennaro Is Back Next Month: Here’s What You Need To Know

The feast of San Gennaro takes over Little Italy each year for 11 days, this year will mark the 96th anniversary of this special festival. Beginning on

Put your big person panties on and get ready!
THE SHOW STARTS AT 10AM ON ELECTRIC FM!

Her music, films and legacy

Her music, films and legacy

29 years ago today, August 6, 1993, the final episode of Perfect Strangers aired. It ran for eight seasons from March 25, 1986, to August 6, 1993, on the ABC television network. Created by Dale McRaven, the series chronicles the rocky coexistence of midwestern American Larry Appleton (Mark Linn-Baker) and his distant cousin from eastern Mediterranean Europe, Balki Bartokomous (Bronson Pinchot).
Originally airing on Tuesdays for the short six-episode first season in the spring of 1986, it moved to Wednesdays in prime time in the fall of 1986. It remained on Wednesdays until March 1988, when it was moved to Fridays. The show found its niche there as the anchor for ABC's original TGIF Friday-night lineup, though it aired on Saturdays for a short time in 1992.
The series was the brainchild of Dale McRaven (co-creator of Mork & Mindy) and producers Tom Miller and Robert Boyett. Miller claimed that the series' inspiration came in the wake of the 1984 Summer Olympics in Los Angeles, when America experienced a wave of renewed patriotic sentiment. Their idea for a comedy about an immigrant in America was initially rejected by all 3 major television networks.
In December 1984, Bronson Pinchot garnered notice for his role in Beverly Hills Cop as Serge, an effeminate art-gallery employee with an unplaceable foreign accent. When Miller and company pitched Pinchot as the star of their immigrant show, ABC signed on to the project, originally entitled The Greenhorn. By this time, however, Pinchot had become unavailable, as he had taken the role of a gay attorney in the NBC series Sara alongside star Geena Davis.
Sara failed to find an audience, and was canceled by May 1985. With Pinchot now available, Miller and Boyett began to develop the show in earnest. By November, comedian Louie Anderson was cast as the immigrant's American cousin. A pilot episode was put into production, but in the end Anderson was not considered right for the role.
Development was placed into overdrive when ABC President Brandon Stoddard offered the producers a prime tryout slot for the spring of 1986 between the hit shows Who's The Boss? and Moonlighting on Tuesday nights. After running through several actors for the part of Balki's cousin, the producers settled on Mark Linn-Baker, whom they had recently seen in a guest appearance on Moonlighting. Linn-Baker displayed immediate chemistry with Pinchot, and the series raced into production under the new title Perfect Strangers. It premiered on ABC on March 25, 1986.

Be the first to know and let us send you an email when DJ Ruby Tuesday posts news and promotions. Your email address will not be used for any other purpose, and you can unsubscribe at any time.

I see you between the bushes! Shake Your Tail over to Electricfm.com starting at 10:00 a.m. on the 4th of July!DJ Ruby Tuesday

I'm on the street getting excited for the weekend!

Having a hard time finding Electric FM? It's not difficult at all! Just go to www.electricfm.com or get the phone app for Electric FM and put it in your phone! Take us anywhere! Would somebody please tell the pigeon also? 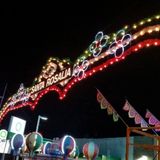 Sha-Doobie at The Greenhouse Cafe in Bay Ridge Brooklyn!

We have another happy Electric FM listener who got the phone app! They just sent me a screenshot of their phone!
https://toofab.com/2021/12/29/alexa-tells-10-year-old-to-stick-a-penny-in-live-electrical-outlet/?fbclid=IwAR1fUPycUd83UJIb0lHTvlE2_uqCsgoO9LM_mO6ytGy-gd226yZz3TcxuQ0
HilabRuby! Escuchando te desde México!
Happy belated Ruby Tuesday!!!!!! Have a great year!!
Ho! Ho! Ho!
What exactly is a public figure?
Happy FOURTH. May a Turkey Baster finds its way to your party!
TRUMP! TRUMP! TRUMP! TRUMP! TRUMP!
is that sliwa? Omg does that bring back memories. He sat in my office with his wife in the 80's ha`1
Check out Party 101.9 Radio - www.nexusradio.fm
http://www.sbsun.com/media/20160116/x1039-dj-starting-dirty-radio-online-station
Best wishes to you. You are great at what you do . Miss u pulse too. To bad it's gone in ny. Sidestreetradio.com supports you.
x

Other Radio Stations in New York (show all)