One student shared his opinion on bilingualism.

One of my most defining features is my love for languages. I grew up speaking the Spanish my immigrant parents taught me, learned English in pre-kindergarten, and took up French when I got to Flint Hill. The plurality of language and its importance in my life are certainly invaluable parts of my dev...

The past few weeks have been taxing for Americans across the nation. Election season is a turbulent time in any case, and this year’s was no exception. As the pool of candidates leveled out to representatives of the center-left and far right, the country found itself split in a stark divergence betw...

Leading up the start of the season, the Boys Varsity Basketball team looks to prove their doubters wrong.

For the first time in a few years, the Flint Hill boys varsity basketball team enters the 2016-2017 season with a hunger; a determination to disprove those who have already counted them out. In a Mid Atlantic Conference (MAC) of Division I basketball signees, Washington Post-ranked teams, and elevat...

This year, after leaving school early on Friday, November 18, fourteen Flint Hill students began their holiday break by traveling to the University of Virginia and participating in its annual Model United Nations Conference. Each student was tasked with taking on a role, either as the representative...

Upper School campus gets a makeover

Returning students might have noticed that a few changes had taken place on the Upper School campus while they were gone. Over the summer, Flint Hill’s facilities staff worked with the building’s original architect, Leon Chatelain III, to design a more effective and accommodating learning and social...

Editor and senior Jack Lovelace offers suggestions on how to better our school's theatre program by promoting musical theatre classes, stressing the importance of students' exposure to an interdisciplinary program.

Every two years, the Upper School Music and Theater Departments collaborate to put on a musical. The “musical” years bring excitement and a unique energy to the Flint Hill atmosphere. Between the performances and rehearsals, however, the Upper School offers few overlaps in the interdisciplines of mu...

Flint Hill seniors attend prestigious Governor's School programs over the summer and come back home enriched by the experience.

Seven accomplished Flint Hill seniors attended Virginia Governor’s School programs during the summer of 2016, using that time to learn more of a field about which they are passionate, with the goal of bringing their new knowledge and experiences back to school with them in the fall. These students w...

Flint Hill gathers to embrace a day of remembrance

On the fifteenth anniversary of the 9/11 attacks, Flint Hill students and faculty hold a solemn flag-planting ceremony on honor of the victims and their families.

On September 12, the Flint Hill Upper School community assembled in the gym to remember a day of terror, alarm, bravery, and hope. Upper School students and faculty alike participated in a touching ceremony that recalled the tragedy and unadulterated valor of 9/11. As the Upper School choir perform...

Under an agreement reached by the administration and the SCA following input from students at open forums, only those who have held prior leadership roles at Flint Hill are eligible to run for SCA's highest offices: Vice President and President.

With elections for student body president and vice president just around the corner, the Student Council Association (SCA) has reformed the voting process for the 2016-2017 school year by adding a “leadership” requirement for the organization’s top roles. The SCA, under current President Justin Sale...

They are part of an effort to quell tensions over race, gender, and sexuality, among other intersectional topics.

"Flint Hill is one of the only schools in the area (that I’ve heard of) that has a council dedicated to protecting and encouraging the inclusivity of and respect for the community’s diverse cultures, ideas, orientations, etc. Many students wonder why we need such a thing if it’s not a visible problem at our school, but that’s really the point. If we don’t work out the small problems in our community, bigger, more serious problems will soon arise."

In this op-ed piece, Nicholas Magdits offers his views on racism, homophobia, and other forms of prejudice at an institution that prides itself on diversity and inclusion, and offers thoughts on the positive progress being made.

Notice: Upon further investigation, it was determined that some of the events alleged by some students in an earlier version of the article were inaccurate. A portion of this article has been removed in an effort to prevent misinformation in light of an administrative investigation into their circumstances.

When I was interviewed by the Flint Hill admissions office as a rising ninth grader, they emphasized the four core values of our community: respect, responsibility, honesty, and compassion. Almost three years into my career at this school, I’m finding that, as much as we would like everybody to live…

UPDATE: all has been cleared and everyone is okay, accounted for, and free to return to the building.

Fire trucks had arrived on Flint Hill's Upper School campus after fire alarm went out at about 2:35. Administrators had told students that it was not a drill.

"Though I do realize that the acknowledgement of this holiday is fun and vital to its joyous spirit, in this early celebration, it seems as if we have lost track of another important holiday deserving recognition—Thanksgiving."

For, as soon as Halloween ended, nearly two months before Christmas Day, there were already Christmas decorations in stores, and Christmas music began to play on radio stations.

Terror in the homeland: a first-person account of life during—and after—the attacks on Paris

One French student, whose school partnered with Flint Hill for an exchange program, said in an interview that “I do not feel safe when I’m alone in the street, and I’m afraid that new terrorists will again kill indiscriminately as they did on Friday the 13th."

Even when visiting a middle school classroom in which students just finished taking a test, Headmaster John Thomas recounts hearing them say something he considers to be uniquely Flint Hill.

"One of the most significant things that hit me when I started here is that when you finish class and go to wipe the board, a lot of times when you hear students leaving, they’re not saying goodbye, they're saying ‘thank you.’"

Attorney highlights importance of online responsibility in wake of Acceptable Use Policy...

After an incident in the school community prompted Flint Hill to address sexting and its dangers, a lawyer tells FHS that sexting isn’t just wrong—it’s a felony.

Concluding a great year with next year's 2015-2016 Editors-in-Chief: Priya Gill '16 and Arman Azad '16! And of course, our amazing faculty advisor, Ms. Robin Goldstein! 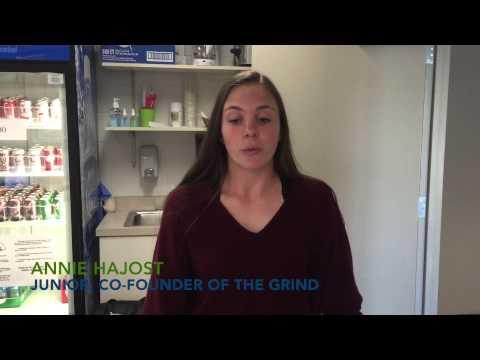 The Grind – The Flint Hill View

It's made over $200 in just two days—and it's run completely by students.

Every county in BLUE is closed for weather on Wednesday, February 18. Flint Hill has decided NOT to close tomorrow, and is represented by the green dot on the map.

Seniors Jack Jenet, left, and Zane Homsi, right, were the DJs at the Winterfest dance, marking the first student-hosted event.

A blanket of snow greeted students and faculty this morning

AP French students sent this photo to the French Embassy in Washington, D.C. in a show of solidarity with the country following the Paris terror attacks.

A snowy, confusing, and wintery week as students returned from their break:

Flint Hill decided not to follow two FCPS decisions this week. Following the controversial decisions, students and the headmaster comment on the week-long confusion.

A snowy day on campus as FCPS decided not to delay or close schools. At 9:30 AM, many students were still stuck on the roads. A winter storm warning was issued for Fairfax and Loudon counties at 9:00, and snow continues to fall. Students will not be penalized for tardies or absences.

Flint Hill follows Fairfax County Public Schools (FCPS) for school closings and delays. Earlier this morning, FCPS issued an apology on their website after reports of numerous student accidents, writing "We apologize for the difficulties the weather caused this morning."

"The decision was made with the best information we had very early this morning," FCPS said. "Needless to say, the conditions were far worse than anticipated."

Round up 2014 with some of our favorite stories of the year!

"David Egan: A beacon of hope for those with Down syndrome": http://www.fhsview.com/archive/2014/09/25/david-egan-a-beacon-of-hope-for-those-with-down-syndrome/

According to our most recent poll, Huskies really seem like their Pumpkin Pie.

Happy Thanksgiving from The View staff!

The sun sets over an emptying parking lot as students embark on their week-long Thanksgiving break.

In a mock election held at Flint Hill on November 4, students were able to choose between three Virginia senatorial candidates.

See there results of the election here:
http://www.fhsview.com/news/2014/11/20/flint-hill-chooses-democratic-candidate-in-landslide-mock-election/

Anchovies in the sloppy joes? Here are five interesting things that may surprise you about Flint Hill's lunch menu:

Be the first to know and let us send you an email when The FHS View posts news and promotions. Your email address will not be used for any other purpose, and you can unsubscribe at any time.

Send a message to The FHS View: