A Book Subscription Box and Book Club in One

Group text chat is underway in @thechaptr app…join us as we dish on this month’s pick, a historical fiction novel titled The Astonishing Life of August March.

🗣Are historical fiction novels your jam?

Bombay’s first female lawyer, summer paradise with a mysterious disappearance and a group of women forging relationships in a place called Heaven.

👉🏾Swipe to see which title was voted as our July buddy read!

🗣Are any of these nominees on your TBR list?

Strange happenings start occurring on the set of a horror movie..is it life imitating art, or the other way around?

Full synopsis in the comments 👇🏾

Thanks to @blackstonepublishing for the gifted copy. This one will definitely be traveling with me on summer vacay.

🗣While we await Run Time, let’s dish…what was the last thriller that blew your mind?

Do your reading essentials change based upon the season?

Now that the weather is warmer, my reading habits have changed just a smidge

🧋I ditch the hot coffee/tea for the iced version
⛱Instead of a blanket, I love having an umbrella to block the sun
🏝I ditch indoor reading for outdoor reading—park, patio, or the beach/lake (if I’m lucky 🤞🏾)

🙏🏾A HUGE thank you to @sjsindu for taking time to chat with us about her second novel, Blue Skinned Gods.

We dished on everything from caste, faith, sexual identity, Hinduism and finding one’s true self. We learned a lot, laughed a lot and had a blast through it all!

The convo served as yet another reminder that there is so much more commonality among all of us than there are differences.

Hope everyone is having a great weekend!

Join us tomorrow as we chat and sip with author @sjsindu about our book club pick, Blue Skinned Gods 🤓

The weekend is almost upon is…🥳

Easing into the week by squeezing in some time between the pages of this month’s buddy Blue Skinned Gods.

Community members, join us for text chat in @thechaptr app and tell us how you’re liking it so far.

Not quite up to speed? No problem, check the cliff’s notes where we break down all the deets on what’s been happening thus far in the book.

And don’t forget to join us for our author chat with @sjsindu this Saturday 5/21!

Check the app to join the group text chat of Part I of Blue Skinned Gods.

🗣What’s your go-to for marking memorable passages in a book? Sticky notes? Highlighter?

🔖A book that launched you into adult reading: Cloud Atlas by David Mitchell

🔖A sci-fi book you love: Anyone by Charles Soule

🔖An author that you’ve read more than 10 books by: John Grisham

🔖A childhood favorite: So many. The Lion, The Witch and The Wardrobe, Dear God It’s Me Margaret, Where the Sidewalk Ends, any Amelia Bedelia book

🔖A book that you wish got more attention. Augustown by Kei Miller

🔖A book that challenged your thinking: Caste by Isabel Wilkerson

🗣Do we have anything in common?

Thanks to @places_and_books for the inspiration.

Morally grey, audiobook, fictional and buddy reading for me!

🗣Tag your bookish bestie for a game of This or That.

When the ending is predictable.

🗣What’s yours? Drop it in the comments 👇🏾

🗣Last place you visited between the pages of a book?

I’ve been to Ibiza, Martha’s Vineyard and Toronto. just in the last several weeks. No passport required 😉

Wanna travel to India and NYC with us? Today is the last day to reserve your May book box featuring Blue Skinned Gods.

And what better way to celebrate than with giving away freebies?!

We are hosting a giveaway…TWO lucky winners will receive: • One FREE Deluxe Book Box for you + one for your bestie

Keep reading for deets on how to enter 👇🏾

What do you have to do to enter?

🎟If you subscribe to either our May Basic or Deluxe Box, you automatically get you TWO entries. No need to do anything !

🎟Non-subscribers can enter and receive ONE entry by answering a trivia question and joining our mailing list.

Open to US residents at least 21 years old only. Winners will be randomly drawn. Winners must provide contact information for their bestie who they would like to receive a free box. Bestie selected must be a US resident at least 21 years old. A person can only win once. Winners will be announced no later than May 21, 2022 via TheChaptr app and The Chaptr’s Instagram and Twitter pages (@TheChaptr).

May the odds be ever in your favor 🏆

Everyone starts off with 16 points.

📍Subtract 1 point for every task you have never done.

Drop your score in the comments 👇🏾

Are you joining us in May for our book club pick, Blue Skinned Gods?

So thrilled about this pick, not to mention this gorgeous cover 🤩

🗣What are jumping for joy about this weekend?

Join the discussion on this month’s read, The Truth Hurts, in The Chaptr app! We want to hear what you think of Drew and Poppy’s widely unique marital arrangement.

🗣Do you ever just want to scream to the protagonist: “Don’t do it!” 😫

The votes are in! Thrilled about our May title, Blue Skinned Gods…plus author @sjsindu will join our May book club meeting🎉

Reserve your May book box by 4/21 or until we sell out!

One year ago, we launched The Chaptr book box with the goal of delivering not just a box of products, but an entire book experience. At this one year mark, we want to celebrate our community of book lovers who helped to get us here!

Wanna learn more about our community? Check out a recent review from Next Subscription.

Link in bio to read the full review!

Check out our review of February’s book club pick, All The Young Men + deets on how to score a FREE digital copy of our original cocktail and mocktail recipes inspired by the book.

🗣How soon after you finish a book do you have to write the book review before you forget what happened in the book? 🤪

Yep, and will do it again. And again.

🗣Share with someone you know who can relate 🙋🏾‍♀️

Finishing up this gem because tomorrow is #bookclubsunday 🤓

🗣Sundays and book clubs seem to go hand in hand. Do you have book club meetings on any other days of the week?

📚Set in South India during the British colonial period but with powerful resonance to the present day, One Part Woman tells the story of a couple, Kali and Ponna, who are unable to conceive, much to the concern of their families—and the crowing amusement of Kali’s male friends. Kali and Ponna try anything to have a child, including making offerings at different temples, atoning for past misdeeds of dead family members, and even circumambulating a mountain supposed to cure barren women, but all to no avail.

📚A more radical plan is required, and the annual chariot festival, a celebration of the god Maadhorubaagan, who is one part woman, one part man, may provide the answer. On the eighteenth night of the festival, the festivities culminate in a carnival, and on that night the rules of marriage are suspended, and consensual sex between any man and woman is permitted. The festival may be the solution to Kali and Ponna’s problem, but it soon threatens to drive the couple apart as much as to bring them together.

Join the discussion on this month’s buddy read, Hana Khan Carries On, in the app 📚

This month’s deluxe box include one of these luggage tags as an ode to The Truth Hurts’ protagonist, Poppy, and her adventures traveling the world ✈️

Today is the last day to reserve your box!

🗣Has a book description of a destination ever convinced you to travel there?

Although an antiquated term, “chick lit” is still used quite frequently in the literary world to describe literature geared towards women.

🗣Which nominee speaks to you?

🗣Tag a bestie you love buddy reading with!

🗣Tag a bestie you love buddy reading with!

The plot of this month’s title, Hana Khan Carries On, is getting…messy 🙊

Join the chat in The Chaptr app and share your take on Hana’s next move!

Wanna chance to score a free box? Check our stories for deets!

May the odds be ever in your favor 😉

Open until our story expires tomorrow!

Be the first to know and let us send you an email when The Chaptr posts news and promotions. Your email address will not be used for any other purpose, and you can unsubscribe at any time.

Send a message to The Chaptr: 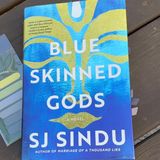 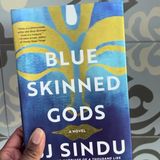 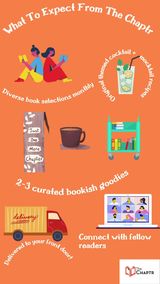 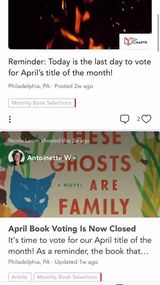 Introducing The Chaptr, A Book Subscription Box and Book Club in One

Other Media in Philadelphia