...your online news source for all that's happening in Owen County, Indiana

She was a homemaker for many years and it was her most beloved job. She enjoyed crocheting, being a ruthless card player, playing bingo, baking, reading, walking around the golf course, where she liked to keep it clean and would pick up trash on her journey. She also enjoyed watching Hallmark movies and delivering food for the local food bank.
She was a member of the St. Jude Catholic Church in Spencer and still worked at Molly’s Foods Unique one day a week. She also use to sing in the choir at church and that is where she met her beloved husband, Louis Eugene “Gene” Vargo.

Memorial Mass will be held at St. Jude Catholic Church in Spencer at 11:00 am on Wednesday, May 18, 2022 with Father Dennis Duvelius officiating.

Memorial contributions may be made to St. Jude the Apostle Catholic Church at 300 W. Hillside Ave., Spencer, Indiana 47460.

Online condolences may be shared with Mary’s family at www.westparrishpedigo.com

James Driver died in 2021 when his vehicle was struck by a semi truck while responding to a crash on State Road 45.

Did you know that in addition to our retail space, Spencer Pride has a Gathering Place for impromptu meet-ups and after-school work! We offer free WiFi and computers. We also have a library of books and a wall of information.

We are a certified Safe Place for youth and have a free Meeting Room for local affirming, not-for-profit organizations.

Come hang out! We are open Wednesday to Sunday from 10 AM to 7 PM.
-Spencer Pride CommUnity Center

Mary Catherine Ackerman, Spencer, Indiana, our loving mother, wife, friend, and teacher, passed away on May 16 after a short and courageous battle with cancer. Born December 13, 1951, Mary was the second daughter of Robert E. Wynant and Nancy Reighard Wynant of Pendleton, Indiana. She attended the Pendleton schools and was in the first graduating class of the newly consolidated Pendleton Heights High. She attended the Pendleton First United Methodist Church.

Mary received her bachelor’s and master’s degrees in English from Indiana University where she was a member of Alpha Phi sorority, serving as chapter president her senior year. She met Mike, her future husband, while at IU, and they were married in July 1977. Mary and Mike were blessed with two sons, Matthew, born in 1979 and Adam, born in 1984.
Mary began her 35-year teaching career at Triton High in Bourbon, Indiana, 1974-1976. She then taught at Indianapolis North Central High, 1976-1979, and ended her career at Owen Valley Middle and High Schools, 1980-2010.
Mary received several teaching awards during her career, but she was most happy in the classroom with her students. She held a special place in her heart for the students who put forth the effort in her class, no matter what their academic ability.

After retirement, Mary served as a member of the Owen County Preservations team that managed the refurbishment of the Tivoli Theater in Spencer, Indiana (another sincere “thank you” to Gayle and Carl Cook). She also worked as a part time receptionist at the IU Alumni Association in Bloomington. Mary loved her time working and the friends she made at both positions.

Mary is survived by her husband, Michael Clarence Ackerman of Spencer, sons Matthew Robert Ackerman of Indianapolis and Adam Charles Ackerman of Bloomington, IN, her mother, Nancy Reighard Wynant of Pendleton, IN, sisters Diana Garner (Donald) of Elwood, IN and Rachel Wilcox (David) of Pendleton, IN. Mary is also survived by an aunt, many nieces, nephews, cousins, and in-laws, all who loved her dearly.
Mary was preceded in death by her father, Robert E. Wynant, in 2012.
Mary’s family would like to thank her doctors, her hospice nurse, Charmaine Matavuli, and the caring nurses at the IU Hospice House in Bloomington.
A special thank you to Mary’s friends Sally Renne Murphy of Ellettsville, Margot Renne Payne of Greencastle, and Alison Martin of Indianapolis who brought comfort to Mary during her final months. Also, a thank you for all the cards and letters from Mary’s former students, colleagues, and friends. They brought her fond memories, laughter, and joy these past months.
Mary has chosen cremation and has requested no public service. West, Parrish, and Pedigo Funeral Home in Spencer is handling arrangements. Memorial contributions can be made in Mary’s name to the Owen County Community Foundation, 60 E. Market St., Spencer, IN 47460
https://www.owencountycf.org/

Glenn was a graduate of Decatur Central High School. He was a Veteran of the U.S. Army. He worked as an HVAV Technician and Maintenance Supervisor in property management with the Wiston Group. In 2004 he earned his Credentials of Ministry from Universal Life Church.

He was of the Christian faith.

He is preceded in death by his parents, two brothers, Sam and Ray Fikes, and a sister Linda Miller.

Funeral services will be conducted at 3:00 PM Thursday, May 19, 2022 at West & Parrish & Pedigo Funeral Home in Spencer.

Visitation will be Thursday from 1:00PM until time of service at the funeral home.

Military Rites will be accorded by the Owen County Honor Guard at the funeral home.

Online condolences can be shared with Glenn’s family at; www.westparrishpedigo.com

We received 9 submissions to our contest on Human Expression.
Third Place goes to
Tina Prunty.
"Bored At Wedding"
Taken April, 2015.

The Owen Gazette is inviting our community members to participate in a photo contest. We will be publishing the winning entries.
Subject: HUMAN EXPRESSION

This contest will involve photos related to Human Expression.
In this case, photos are evaluated on exceptional examples of subjects expressing raw emotion and all that may entail.
Emotions shown may include anything from joy, ecstasy, amazement, love, pensiveness ... to terror, grief, anger, awe, or bewilderment.
The contest is to center only on genuine human expression. Contrived poses or "selfies" will be excluded. No "expressions" of animals or pets will be considered.

Judging will be done by folks involved with The Owen Gazette, and will be evaluated on composition, originality, and creativity.
Because of our intent on making contests a periodic feature, we will be assigning specific subject matter to individual categories, to change with following forays.

Photos can be submitted by contacting us via our page's "Send Message" button feature. Once there, simply send your photo to us there, in private message. Include detailed location, date of photo, and any other details.

*Each entrant is limited to 5 submissions.
This contest will accept photos from now until midnight, May 14, 2022.
Just take part in the fun! Let us see what our neighbors find interesting... send your photo!

Be the first to know and let us send you an email when The Owen Gazette posts news and promotions. Your email address will not be used for any other purpose, and you can unsubscribe at any time. 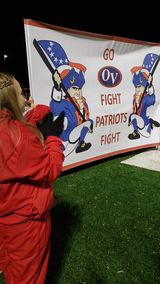 One Last Look At Season For those who were not able to attend the OV vs. Tri-West game on Nov. 5 (Regional play), The Owen Gazette brings one last look. Though Owen Valley experienced loss at final score of 7-28, no one involved can deny that our football team, and community, witnessed a success this year. Our people rallied. With true excitement and zeal. Those speaking after the game exemplified true grace, appreciative of both teams' efforts, grateful for wonderful opportunities, and well-wishing to all. Classy. And, because of that type of reaction, our hometown won. We always win when we exhibit that type of behavior. There is triumph when our actions, as a community, are supporting one another, congratulating, celebrating together. A brief recap of game: • 2:30 into the 2nd quarter, Tri-West Bruins get their first touchdown on a pass play. Field goal good. 0-7 • With 1 minute left in 2nd quarter, Bruins long pass completed for TD. Extra point good. 0-14 • Early 3rd quarter, Tri-West moves swiftly down the field. OV seems to have hard time with TW passing game. Several penalties are also hurting OV. • Bruins get touchdown and field goal about 4 minutes into the 3rd quarter. 0-21 • After subsequent kickoff from TW, OV successful at long yardage return. After two plays, OV at the 18-yd. line and a first down. • The next few plays find OV fighting around the 3-yd. line, both gaining then losing ground. • With 4 minutes left in 3rd, Coach Gibson takes a chance with a 4th down pass into the end zone, but incomplete. • Bruins take over from 3 yd. line and complete a 36-yd. pass. This is followed by an OV sack, but next play TW achieves first down with pass play. Still, they cannot convert to TD by end of 3rd. • At about 7-minute mark of 4th quarter, Tri-West completes a 37-yd. pass. There's a flag on the play, against their offense. Results in pass being ruled incomplete and 10-yd. penalty loss. • At 4:32 left in 4th, OV fumbles and TW picks up very short run

Are You Ready? Stay tuned for a surprise article!

Make sure sound is up!

Other News & Media Websites in Spencer

Next Saturday! Good opportunity to clean up and get rid of those unwanted items!
This sat. White River Poultry club spring show Large variety of some of the best birds in this part of country Owen co Fair grounds
Please share! Coming soon! Our first Owen County Court Appointed Special Advocate (CASA) new volunteer training of 2022. Training begins February 15th. Call (812) 585-7652 or send an email to [email protected] for more information about becoming a volunteer advocate for abused and neglected children in our court system, and to learn details about how to apply for this training.
https://www.facebook.com/groups/3274754162541657/permalink/5444770318873353/?sfnsn=mo&ref=share