Subject to change as we begin rolling show applications. Keep it locked 📣 New schedule!! 📣 After a short summer break, we’ll be starting up with more live programming for the summer arch semester TOMORROW ‼️
➡️Check it out at wrpi.org/schedule 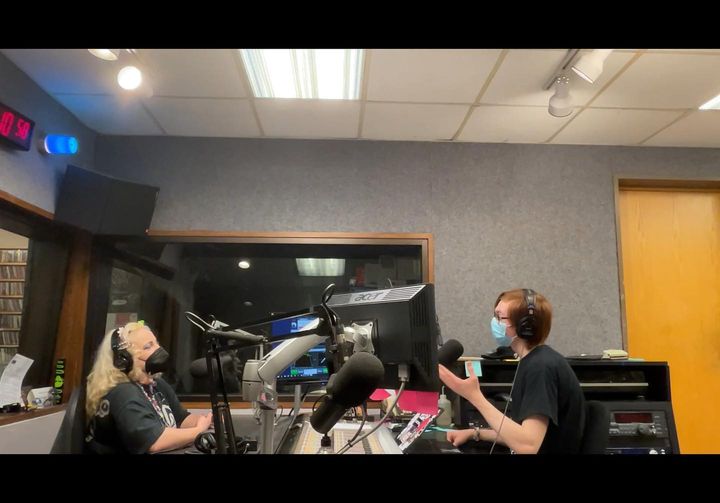 If you missed it live on Thursday, our interview with Bailey Scieszka is now up on our YouTube channel!! (link in bio)

A few weeks ago, we interviewed composer Nina C. Young live in the studio and we just uploaded the footage to our YouTube channel!! (link in bio)

New shelves for the lounge! Swipe for some build party pics 🔨😁
•
•
• WRPI now has a weR Gold Page in order to raise money for us to replace our Digital Amplifiers to improve our audio quality! 🎶 If you’re interested in helping us out or want to learn more about the project, you can share this link check out our WeR Gold Page at: https://impact.rpi.edu/project/29834/wall ‪WE’RE BACK!! Thanks to the help of our awesome tech department, we have been able to set up remote broadcasting beginning tomorrow!! Stay tuned for a full schedule and keep it locked ☺️‬ YESSSS SIRRR New WRPI Merch!!!!! 🤪😋
Stickers, beanies, dad hats, and shirts in all sizes🤘🔥😱😱😱
Designed by one of our own, we got everything for sale so stop by WRPI to rep this awesome merch😎😎🔥
*Featuring a couple of our prideful wrpi members 😲* Merry Christmas and Happy Holidays from everyone at WRPI Troy!!!

Here’s to another great year of WRPI Secret Santa !!

ATTENTION RADIO LOVERS!!
Our Bridging Season Tradition has started‼️‼️‼️
Tune in on 91.5fm or www.wrpi.org 🧏‍♂️ to experience our 24 hours of NONSTOP RADIO during FINALS WEEK‼️
•
•
• Hey everybody! WRPI now has an Instagram! We're going to be regularly updating our page with announcements for various events, such as live in-studio sessions with local and touring bands, DJing for various organizations on campus, and any in-station community activities. Our handle is .5 or you can click the link here: https://www.instagram.com/wrpitroy91.5/?hl=en

A tribute to the late Caroline "Mother Judge" Isachsen, influential musician, open mic host, beautiful singer, and former WRPI DJ. Here is a video of her performing "High Hopes", of which she says "This is one of our own songs. We love it 'cause it's different."

It's Giveaway Saturday on WRPI!!!

Tune in to wrpi.org or 91.5fm! Right now there are giveaways starting to win a pair of tickets to see The Kooks or August Burns Red!

Both shows are this week, so it's a chance to end your February on a great note!

A behind-the-scenes look at last night's Stormy Monday Blues. The first of many with our new live board!

RPI Community, you can come hang out with us and our jams at the Winter Carnival, happening today in ECAV!

Picture of our pop-up band "Danny and the Phantoms" doing the first official live set on our new live board! Video coming later this week!

Turns out The New York Times did a piece on WRPI and college radio a few years back?! Who would've guessed!

"Psycho Killer" from our own DJ Snowman, DJ VTOL, and DJ TK jamming in the WRPI studio!

"Psycho Killer" from our own DJ Snowman, DJ VTOL, and DJ TK jamming in the WRPI studio!

Say "Hello" to our new live board! With this board, the WRPI Live Department has now officially gone digital!!!

Just a reminder that is it that time of year again! Since Wednesday, we have been broadcasting 24/7 in coordination with finals week, as per tradition! Listen in each night for one (or a few) of our DJ's as they stay up all night, battling sleepiness, to bring you continuous radio!!!

Tomorrow, be sure to catch DJ Schister for "Tea Time" at 4pm!
It will be some post-Halloween bops, with the likes of Blondie, Pink Martini and the Von Trapps, ELO, and Marvin Gaye.

As always, make sure to tune in on the webstream at www.wrpi.org , or over the airwaves on 91.5fm!

Be the first to know and let us send you an email when WRPI posts news and promotions. Your email address will not be used for any other purpose, and you can unsubscribe at any time.

Send a message to WRPI:

Other Radio Stations in Troy

Homoradio, a long-running radio show broadcast out of at WRPI, covers Thomas Hurd's and Dylan Toften's marriage license issue where they were denied their license in their hometown in 2018.

Join us for a free screening & panel discussion of Rooted Out Mon., Oct 3 at 6:30pm at Proctors' GE Theatre. RSVP - https://bit.ly/RootedOutEvent
NEW LIVE acoustic track on YouTube!
Does anyone know whatever happened to Cecil B from the Cecil B Reggae Show on WRPI?
WRPI supporting 'Alchemy' in New York is a BIG DEAL for us! So happy! Shout out to WRPI Rensselaer Residential Commons RPI Women's Hockey RPI Women's Tennis RPI Players RPI Fraternity & Sorority Life

New lyric video "Imminent":
I'd like to submit some music for consideration. How do I do that? I can send an Mp3, if you like.
Hi, I'm Luigi D'Ambruoso Director of Gd Records Music an independent label, I would like to know if you accept music, and where can I send it? if you kindly gave me some email address. awaiting reply thank you very much.
Gd Music Records. Answer me in chat thanks.
Beyond billbored: https://open.spotify.com/album/3IFGh2q8oaCmzUnknjgTJH?si=jv2wt_ooQZSQanRJ4T7HvQ
Yoyo xno lyric video!
Hi there.
Thought you might like to hear this song I wrote about Emmett Till, sung beautifully by Martine Allard. Recently released on a Hudson Harding Music CD.
https://www.youtube.com/watch?v=Os5f6br-1nU

If you would like an mp3 or WAV file, happy to send you.
(BMI) Steven Arthur Ferguson
Jim Barrett is one of seven 2021 Capital Region Thomas Edison Music Hall of Fame inductees being honored Oct. 27 at Universal Preservation Hall.

A self-described “child of radio,” Barrett’s passion drives a colorful career. He interviewed Led Zeppelin on Robert Plant’s 19th birthday while at Rensselaer Polytechnic Institute, has navigated his college radio show Kaleidoscope on WRPI – where he promotes local music – through several radio stations since 1967 (it’s still on the air at Kaleidoscope on RadioradioX.com), and founded a favorite music lovers’ hang-out, the funky River Street Beat Shop in Troy. He is also a founding member (and lead singer) of The Lawn Sausages, which has been active locally for a quarter century.

Please join us in honoring Jim Barrett and the entire Class of 2021 on Oct. 27. Tickets are now on sale: https://universalpreservationhall.org/event/capital-region-thomas-edison-hall-of-fame-ceremony-2/
NEW SINGLE on Spotify! https://open.spotify.com/album/3vs00bPZMyZAQxuaF92mrL?si=BmEWvGNVRgaqirZDuNrfNA&dl_branch=1
MINISTERSPIRITHEARNOW.COM
NEW ALBUM OUT NOW! https://open.spotify.com/album/0UArDpKzjvGYaU7QYUYW1J?si=AzkkWtxuS9a_Lv5gKWH7hQ
or http://yoyoxno.com/?page_id=29
NEW LYRIC VIDEO - "Countryside" from the album "Kiss & Hug"
Thank you for the incredible support for More Than Another Day! We appreciate it!

Other Radio Stations in Troy (show all)