We broadcast 24 hours a day in the Washington area on HD radio at 88.5 Channel 2, via IOS and Andriod apps, TuneIn, and online at bluegrasscountry.org.

We broadcast 24 hours a day in the Washington area on HD radio at 88.5 Channel 2, via IOS and Andriod apps, TuneIn, and online at bluegrasscountry.org.

For the spiritual side of Bluegrass… https://bluegrasscountry.org/shows/stained-glass-bluegrass/
From great harmony singing to Gospel instrumentals, join Cindy Baucom, host of Stained Glass Bluegrass Sunday, 6-10am

TODAY on the ROAD SHOW... a special encore presentation!

This Saturday at 10am eastern time, it's the Lee Michael Demsey   Show. https://bluegrasscountry.org/shows/lee-michael-demsey/
Lots of good new releases are in the mix this week, including Kathy Kallick, Crandall Creek, Peter Rowan, Jim Hurst, Laura Orshaw, and Mickey Galyean. Lee will also do a tribute to the late Jim Seals of Seals and Crofts fame. This may seem to be a misnomer...Seals and Crofts, that pop band of the 70's and 80's on a Bluegrass show? But Seals and Crofts used the mandolin and fiddle as key elements of their album tracks, with Jim Seals on fiddle and Dash Crofts on mandolin, so we'll hear examples of that, plus Dale Ann Bradley's Bluegrass cover of the Seals and Crofts smash hit, Summer Breeze.

Friday 7pm EDT, time for the Stephen Mougin show! https://bluegrasscountry.org/the-stephen-mougin-show/
He’s teaching at the Ozark Mountain Music Association YOUTH Bluegrass Band Camp this week & is featuring music from the Ozarks including Rhonda Vincent, Lillyanne McCool & interviews with the camp director Wendy Wright, parents, & young campers talking about the experience. Also, more new music with a great Osborne Brothers lesson in harmony vocals thrown in the mix along with classic cuts, be sure to tune in!

This week on the ROAD SHOW... a special encore presentation!

CHECK IT OUT RIGHT HERE AT Bluegrass Country Radio:
https://streamdb3web.securenetsystems.net/v5/WAMU

Two for Tuesday TONIGHT 6-7pm on the Michelle Murray Show!

Sunday 10am, join Mike Kear https://bluegrasscountry.org/shows/music-from-foggy-hollow/ “On Music from Foggy Hollow this week, I'm joined by Kristi Stanley. I interviewed her on the day her new album Kristi was released and I'm playing that this week, along with some of the songs from her new album. Also, new albums from Unspoken Tradition, Blue Drive, Josiah Nelson, Ages Past and a new gospel album from Authentic Unlimited and Patuxent have released a 'Best Of' album of Leon Morris's music. Also new singles from Kathy Kallick, Mike Sumner, Kevin Slick, Jaelee Roberts, Tony Wray and Frank Ashby. All that and lots more!
If there's time, I'll be looking back in history to remember what was on the show back in the day.
There's nothing too serious and it's all for fun. So join me wont you?”

Friday 7 PM https://bluegrasscountry.org/the-stephen-mougin-show/
Stephen Mougin returns with Classic cuts, new music, and a bunch of stories thrown in! Be sure to tune in!

Thursday noon, time for Bluegrass, Etc.! https://bluegrasscountry.org/shows/bluegrass-etc-with-frank-hoppe/
With your host, Frank Hoppe:
“Lots of great sounds in store this week with new music from Tray Wellington, George Jackson, the Little Roy & Lizzie Show, and the Big Possum Stringband, along with vintage gems from Andrew & Jim Baxter, the Blue Sky Boys on radio, Martha Spencer and Norman Blake! Settle in for a good time!”

Two for Tuesday on the Michelle Murray show tonight at 6 PM!  

Sunday 6-10am https://bluegrasscountry.org/shows/stained-glass-bluegrass/ Cindy Baucom has a variety of Gospel songs to feature on Stained Glass Bluegrass. The last hour of the show is dedicated to commemorating Memorial Day 🇺🇸

Saturday morning at ten eastern time, https://bluegrasscountry.org/shows/lee-michael-demsey/ it's the Lee Michael Demsey Show. In the first hour, tunes from Tony Rice, Casey Penn, the The Gibson Brothers, and more. Then hours two and three are taken up by the Bluegrass Unlimited Magazine National Bluegrass Survey. Lee plays back the top thirty current songs as they appear in the June edition of the magazine, topped by Balsam Range, Be sure to tune in!

THIS WEEK ON THE ROAD SHOW!

CHECK IT OUT RIGHT HERE AT Bluegrass Country Radio
https://streamdb3web.securenetsystems.net/v5/WAMU

This week on Music For Foggy Hollow

Sunday 10am EDT, on Music From Foggy Hollow, https://bluegrasscountry.org/shows/music-from-foggy-hollow/ Mike Kear has “a bucketload of new music. Including albums from Kristi Stanley, Laura Orshaw, Jesse Smathers, Edna's Kin, and a re-release of a bluegrass version of 'Tommy' the great rock opera from 1969, this time from the The HillBenders. Singles from Terry Baucom’s Dukes of Drive, Daniel Crabtree, the Grascals' Chris Davis, Lori King & Junction 63, the The Tennessee Bluegrass Band, and Amanda Cook. All that and lots more! There's enough new music to fill the whole show!
If there's time, I'll be looking back in history to remember what was on the show back in the day.
There's nothing too serious and it's all for fun. So join me wont you?” (Rebroadcast Tuesday 7pm EDT) be sure and tune in!

“Is it time for a barbeque?” https://bluegrasscountry.org/shows/bluegrass-etc-with-frank-hoppe/ Frank Hoppe has “Bluegrass Etc!” Show on this fine Thursday at noon! “Get that charcoal started with some hot Bluegrass and Old Time coming your way on this week’s show! New music from Scott Vestal, Kerry Blech, Kathy Kallick, Fast Track and Shannon Wright. Treasures from Tony Ellis, Kenny Hall, JD Crowe and Joe La Rose! Some mighty good listening up ahead!”

Two for Tuesday TONIGHT, 6-7pm on The Michelle Murray Show!

Hometown Special Sunday 7pm EDT https://bluegrasscountry.org/this-week-on-jay-bruders-hometown-special/
From Jay Bruder- “Tonight on the Home Town Special we are going to cover some ground and Roy Orbison’s “Go Go Go!” gets us moving. Mac Curtis split the difference between rockabilly and rock’n’roll quite nicely so we’ll hear three of his King recordings, including “That Ain’t Nothing But Right.” It’s not uncommon for 1950s musicians top recycle religious songs into love songs, but on rare occasions they would use biblical metaphors to recount the bitterness of rejection. We’ll hear a handful of these gems. Then it’s back to Washington, D.C. for Luke Gordon and Marvin Rainwater. Mickey Gilley recently passed so I’ll play a few of his tunes that did not make the TV obits. The Southern Wonders live up to their billing with a fine version of “Shady Green Pastures” followed by an updated version from Washington by Mae Gooch and the Gospel Stars recording for Mrs. Lillian Claiborne in 1949. Pete Johnson makes a return appearance with two great piano boogies. Gladys Palmer and Jo Evans gives us a sense of Black Pop music in the transition to the R&B years. We don’t need much of an excuse to play Washington’s own Clovers. Here they are augmented by The Blue Belles, also recording for Atlantic. Then it is out to Los Angeles for a particular style of vocal group ballads by The Jewels, The Marbles, and Jessse Belvin. Then it’s up to Detroit for some rough and ready country from Fortune Records. Buster Turner shows us how close his band came to classic bluegrass in 1956. Boots Gilbert gives us some honky tonk country with “Take It or Leave It.” While Skeets McDonald gives us his juke box hit, “The Tattooed Lady.” The Davis Sisters and The Carter Sisters with Mother Maybelle take us back to more conventional country sounds, followed by Jimmy Reed’s slow and easy blues style to ease us out for the week. I hope you hear something you enjoy!”

Be the first to know and let us send you an email when Bluegrass Country Radio posts news and promotions. Your email address will not be used for any other purpose, and you can unsubscribe at any time. 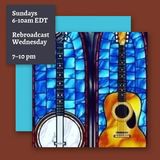 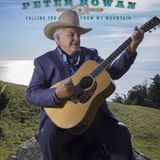 This week on Music For Foggy Hollow

Our hosts bring you the best in traditional and contemporary bluegrass, old time & roots music programming. Because our bluegrass hosts are musicians, ethnomusicologists, historians, producers and festival-goers. People all over the world have discovered that bluegrass is one of the most interesting, honest and heart-felt musical formats. Because we grew out of the American tradition of public broadcasting we don’t make you pay to listen - all we ask is that if you like what you hear you become a member by donating to help keep the music playing

Other Radio Stations in Washington D.C.